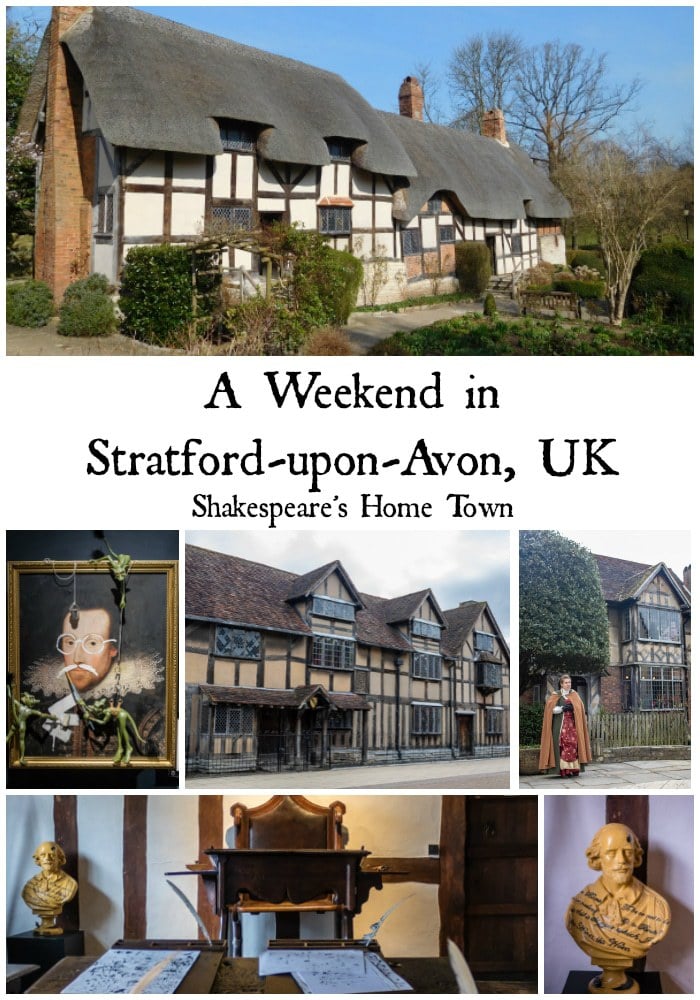 Find out about our adventures on a family weekend in Stratford-upon-Avon, visiting Shakespeare's houses and schoolroom, an automata museum, butterfly farm and much more. 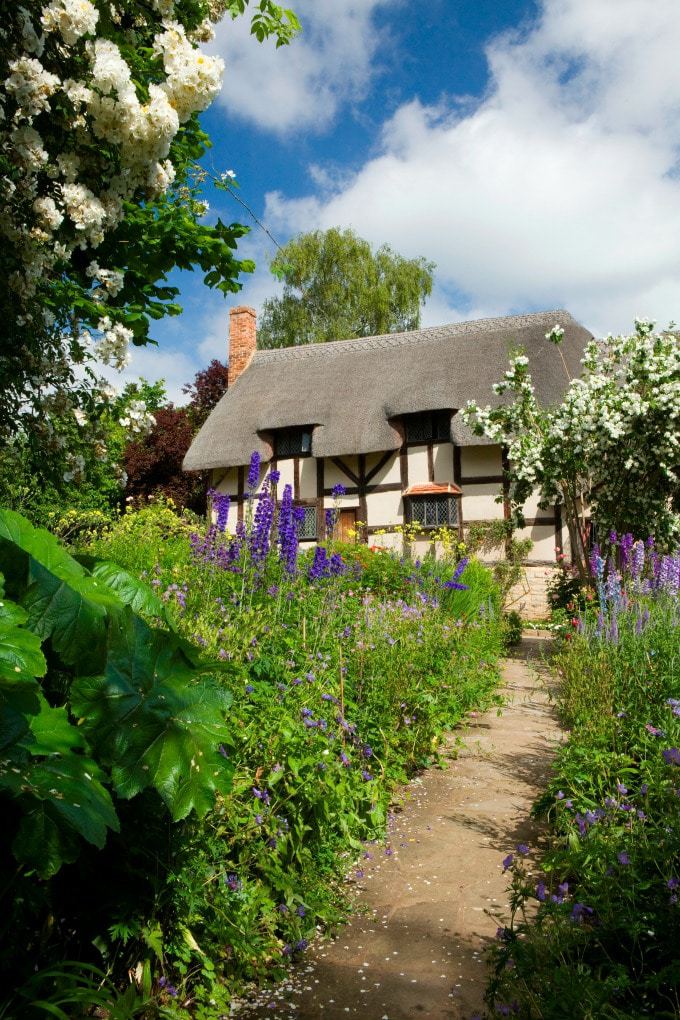 Stratford Upon Avon in Warwickshire, England is synonymous with it's most famous son, William Shakespeare. Undoubtedly the ghost of the Bard's plumed quill touches every corner of this historic town. I was completely charmed from the moment we arrived.

It's a market town with all mod cons, yet the crooked and wonky Tudor buildings huddle together, wise and distinguished, propped up by the young whippernsnappers housing the likes of Pret and Boots. The River Avon quietly snakes past, humming with tourists on boat tours and regal swans. This is quintessential Old England.

Yet even with human statues of Richard the Lionheart and street performances of Hamlet, it doesn't feel like a Disneyfied version of ShakesepareLand.

Sure, one doesn't want for Shakespeare's face on a magnet or a Romeo and Juliet colouring book. But set against the historic buildings, the myriad Shakespeare references and occasional re-enactor feel more like an homage rather than parody. Tourists are here for Shakespeare, and that, my friends, is precisely what they get. And gladly so. 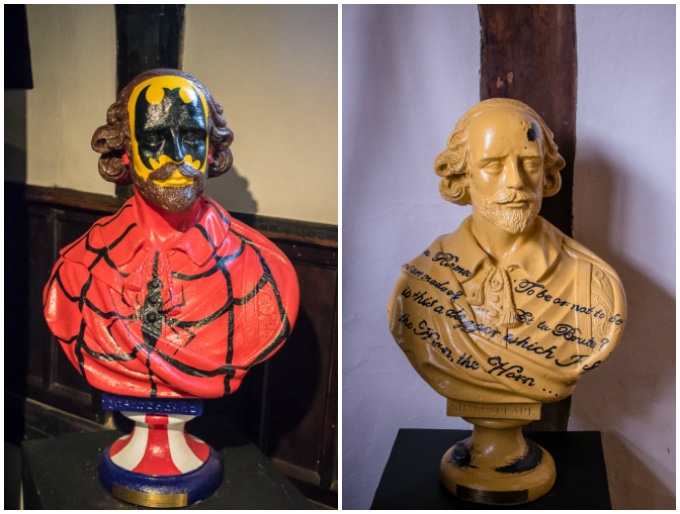 A Family Weekend in Stratford-upon-Avon

As the Love Theme from Franco Zeffirelli's 1968 film of Romeo and Juliet played on repeat in my mind, and my Converse-clad foot touched upon rows of craggy cobbles, I imagined soft leather boots walking those very steps hundreds of years before me. I was enchanted by Stratford-upon-Avon from the moment we arrived.

But although the history enough to capture my heart, would we find enough to keep my children, aged 6 and 7, entertained over a wet Easter long weekend? A resounding YES.

My children were fully entertained the entire time and we didn't even get the chance to see everything that we wanted to over the long weekend. Here's what we got up to: 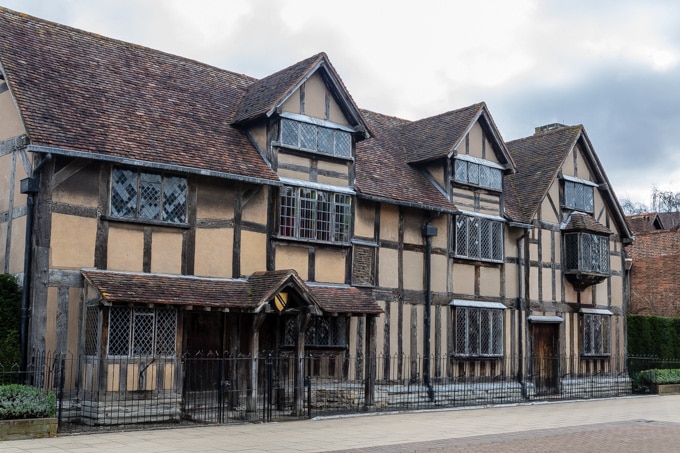 I was quite surprised that so many of Shakespeare's houses are still standing all these centuries later. Even better, you can get tickets from the Shakespeare Birthplace Trust and nosey inside them!  I would have loved to visit Anne Hathaway's cottage, just outside town where Shakespeare would walk to visit her while they were courting, but sadly time wasn't on our side.

There are five properties that you can visit, and we chose to visit Shakespeare's birthplace and Mary Arden's Tudor Farm - where his mother lived and worked. 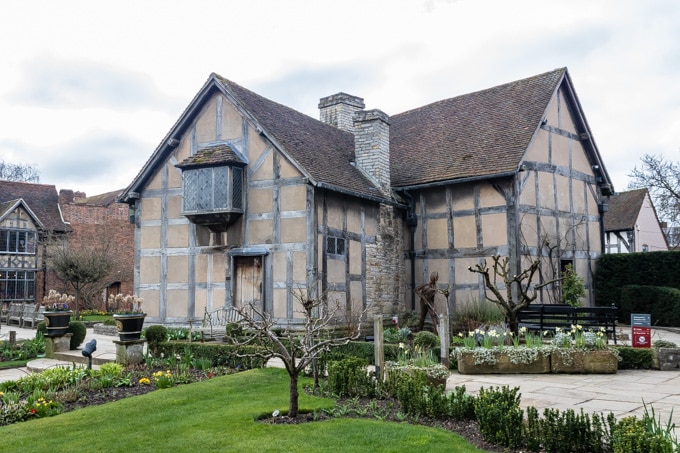 Right in the centre of town is the house where Shakespeare was born and grew up. It felt like such a treat to discover the place where he spent his childhood, from the room he was born in to the place where his family made gloves and sold them through the windows into the street (hence the phrase 'window shopping').

Costumed guides told us all about history, with so many memorable facts. There's  also an activity trail to keep the kids busy while you nose about the rooms.

Did you know? PT Barnum tried to buy it to uproot and take on his travelling circus, but Charles Dickens didn't want him to so bought it instead. Good thing, since Barnum's circus burned down a few weeks later and the house would have been lost. 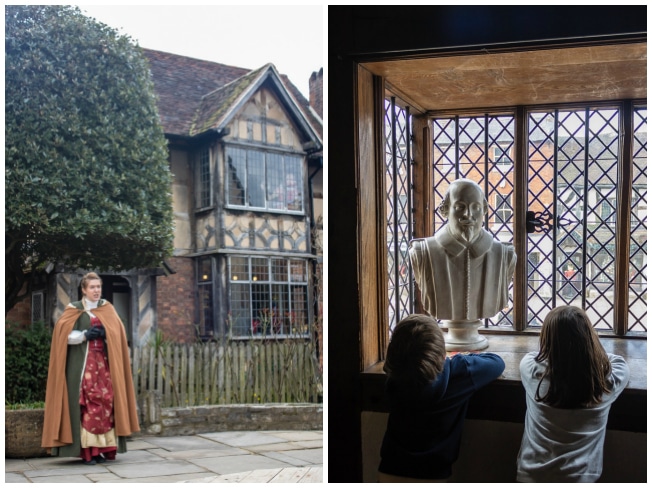 There are actors performing very abridged Shakespeare plays in the pretty courtyard, bringing his works to life. Inside, rooms are staged as they would have been during Shakespeare's time, including a four poster bed in the parlour. It was the 'best bed' and was put there to impress guests and people passing by in the street. 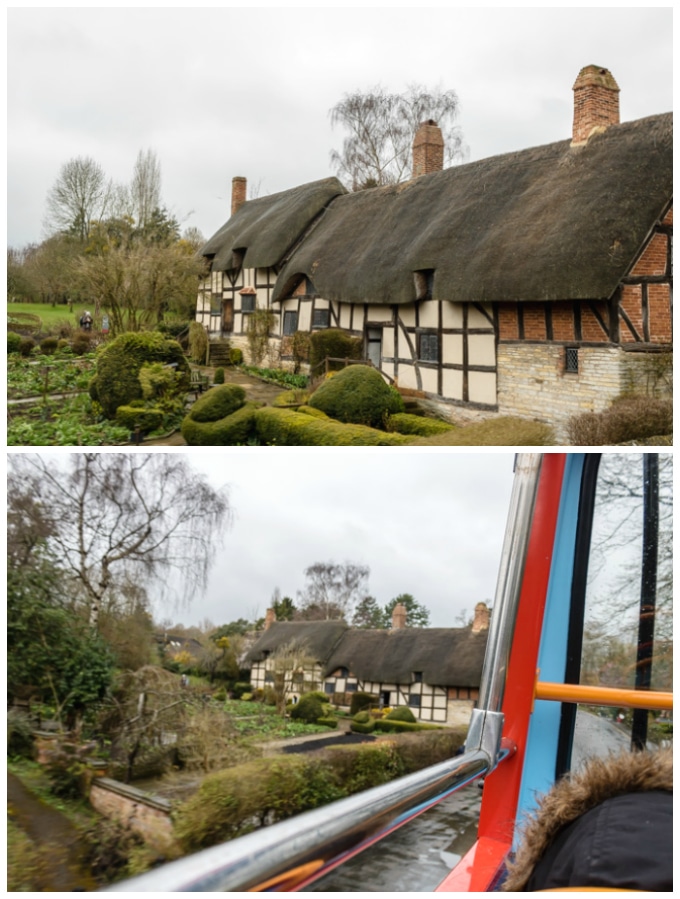 We wanted to take the kids to Mary Arden's farm, which is outside of town, so rather than driving, we got a City Sightseeing open top bus so we could learn as we travelled.

The buses are every half hour at the tourist office and pass all of the Shakespeare Houses as well as loads of other points of interest including the Royal Shakespeare Theatre, River Avon and Holy Trinity Church where Shakespeare is buried. The commentary was full of facts that kept us all entertained on the journey.

One tip is that on the way to the farm they say it gets windy and advise you to go downstairs. We didn't but wished we had! We warmed up quickly with hot chocolate at the farm though. The hop-on-hop-off bus tour takes about an hour for a full trip. 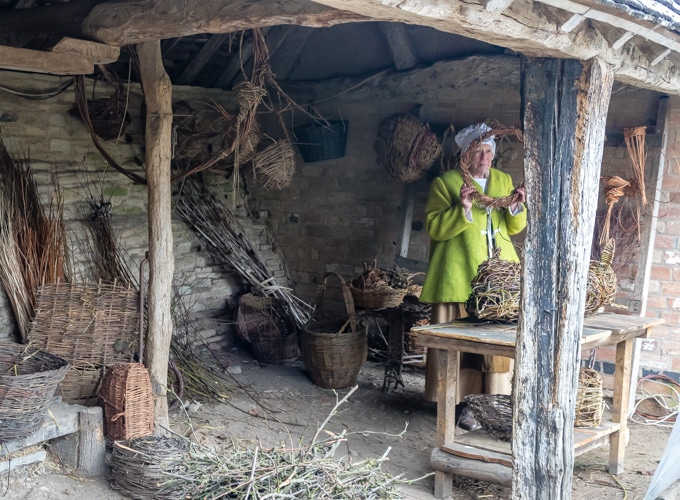 We all had a lot of fun at Shakespeare's mother's family farm. It's set up as a working 16th century farm, complete with animals (lots of babies at this time of year!), woodlands to explore, Tudor crafts and an apothecary garden.

They use Tudor farming methods and there are costumed workers happy to tell stories of what life would have been like on the farm. We saw an archery display, looked at the falcons and owls and wandered around visiting the animals. 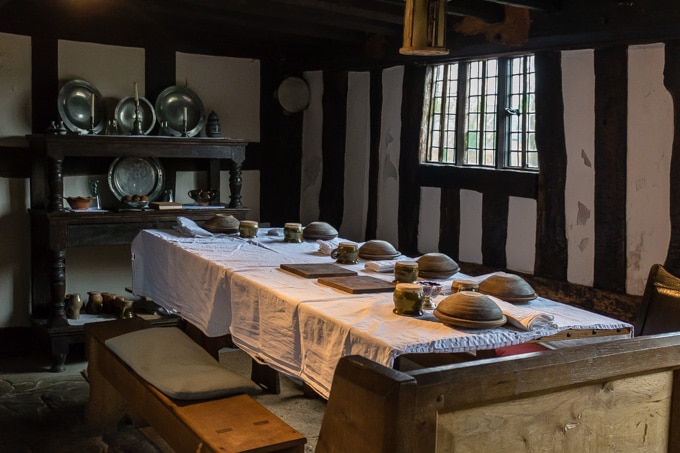 One highlight at the farm was when the workers and Master all sat down to a Tudor dinner. As they ate they told us so many facts and fielded questions from the audience - and my son had a LOT! Watch a short video from the dinner on my Twitter. 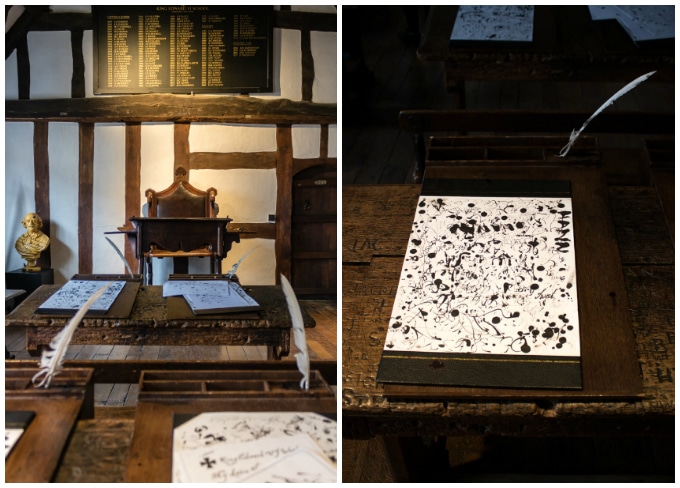 In the town centre is Shakespeare's Schoolroom and Guildhall. The impressive building is still partly a school today and the inside is magnificent. The desks are carved with centuries of schoolchildren's initials and my kids loved sitting at the desks to try writing with quills and ink.

The schoolmaster sat us all down for a Tudor school lesson and again, my seven-year-old son had a LOT of questions that he happily fielded. My son has been telling everyone about the facts he learned, including school days being 6am - 5pm and on Saturdays, which blew his tiny mind.

We had such a great time here and it really opened the kids' eyes to how different things were and brought the past to life for them. 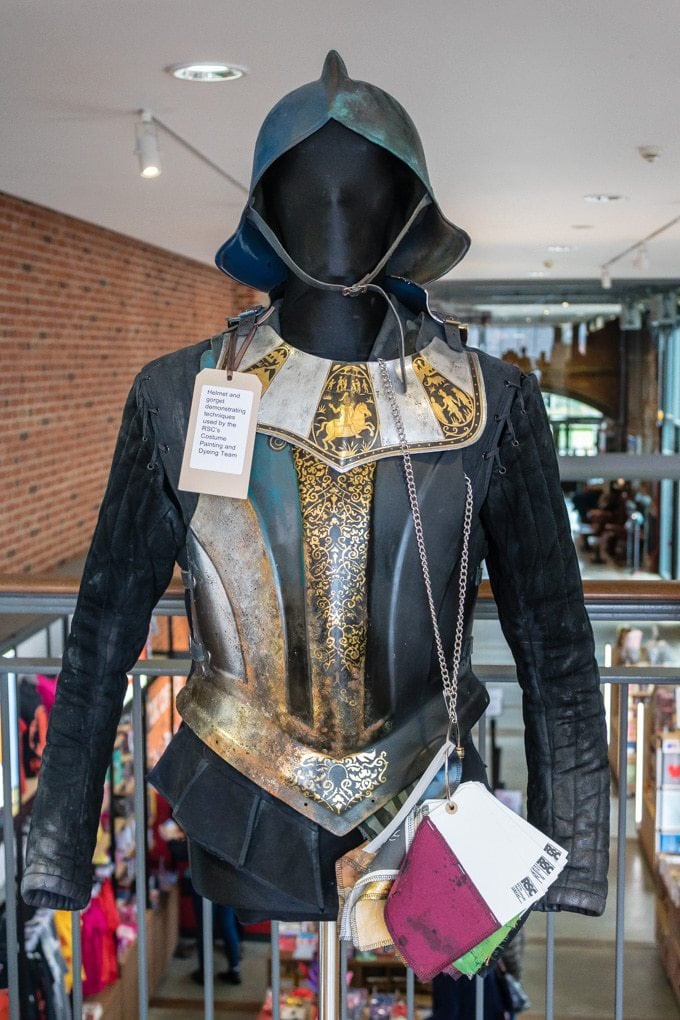 After watching the swans in the River Avon, we headed into the Royal Shakespeare Company. Sadly, with the kids in tow we weren't able to watch a play, but it was lovely to explore the building.

We looked at some of the impressive costumes and then had lunch in the Riverside Cafe. They have great value healthy kids boxes with sandwich, fruit, veggies and hummus etc.. And nice coffees and light bites for grown ups. 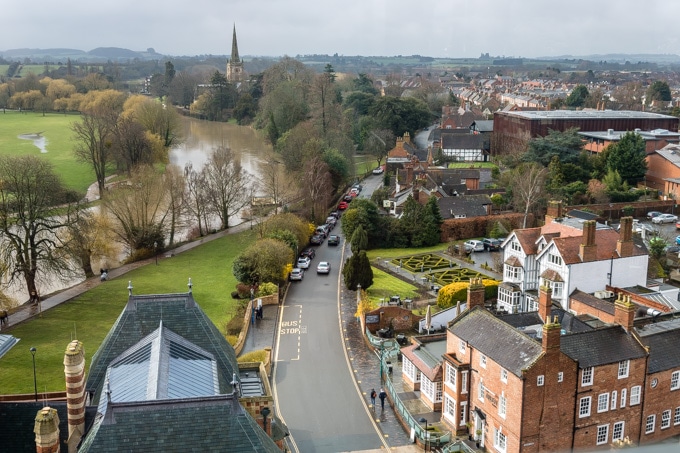 We took the lift up to the top of the 32 meter high RSC Tower to gaze down upon Stratford-upon-Avon.

It was a pretty dreary day, but normally you would be able to see for 20 miles. We were still able to see a lot and it was lovely to view the River Avon meandering down past Holy Trinity, the church where Shakespeare is buried. 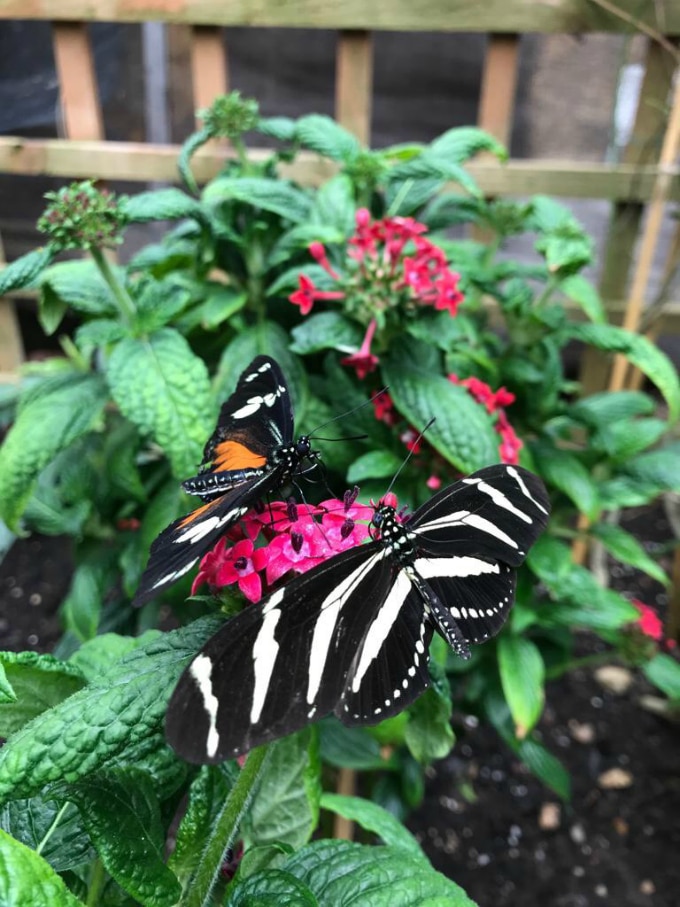 But it wasn't all Shakespeare while we were there. We went to the UK's largest Butterfly Farm - which was really quite amazing.

The heated rainforest rooms were a welcome respite from the rain and the place was filled with beautiful butterflies. A fish ponds and a waterfall were nestled amongst all the tropical flowers and greenery and we loved walking through the rooms as the butterflies flew all around us.

There's also a Minibeast Metropolis full of creepy crawlies and slithering serpents. Ropes are suspended from the ceiling and you can see a colony of leafcutter ants carrying their loads along it - quite mesmerising! 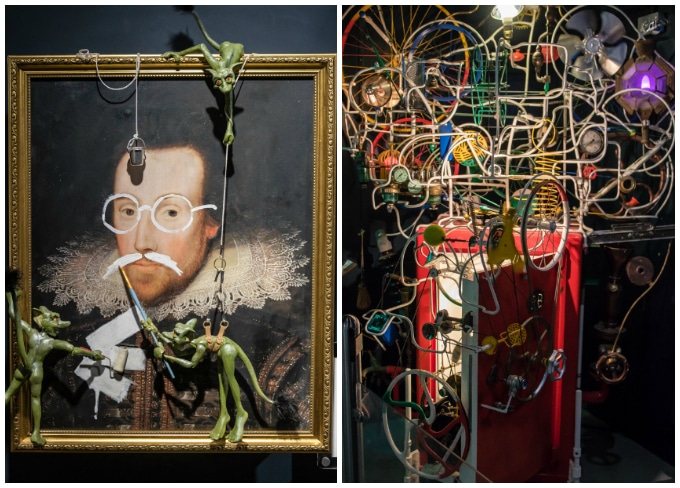 On our last day, we went into the MAD (Mechanical Art and Design) Museum. Filled with handmade kinetic art, including automata and marble runs, we were enchanted immediately.

With the touch of a button, the mechanical displays burst into life. Wheels spun, wooden characters moved and marbles wound their ways across exhibits.

My husband and I were as engrossed as the kids and we all had an amazing time. What a wonderful way to ignite our inner inventors and encourage a love of science, technology and engineering. 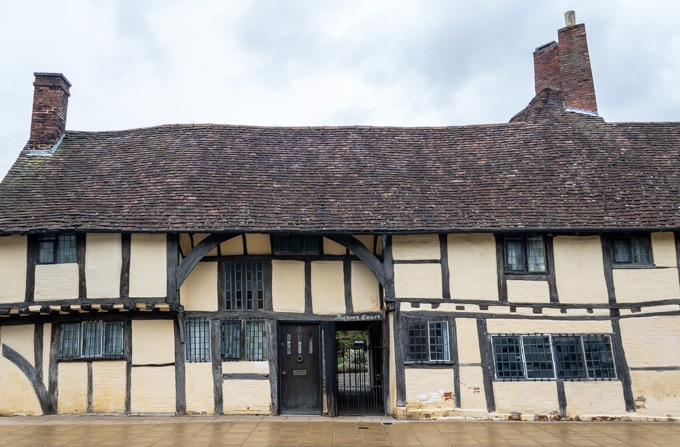 We couldn't stay in Stratford-upon-Avon without making sure our accommodation was equally historic. One Mason's Court is a holiday cottage in a house built in 1485, but renovated inside so it has all mod cons. The City Sightseeing bus tour even pointed it out on our journey as it's the oldest house in town. Read more about our self catering holiday cottage, One Mason's Court.

Be sure to also check out my reviews for Gylly Sunrise, Falmouth and a weekend in Southport.