Here's my Camp Bestival 2017 review. There might have been mud, but we didn't let it dampen our spirits. We had an amazing time! 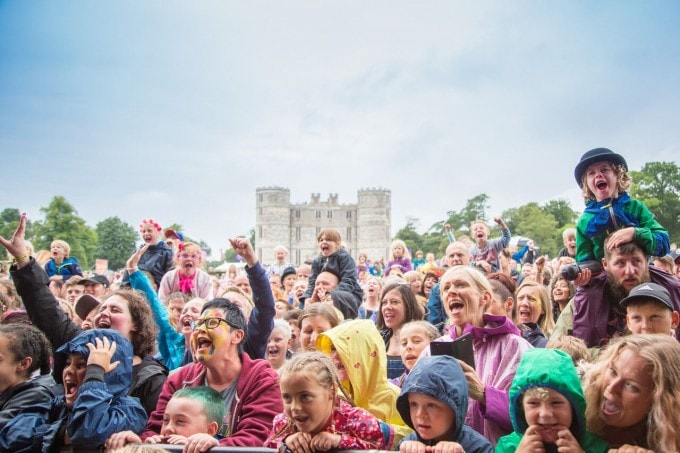 Firstly, I'll have to admit that it was rather more Damp Bestival than Camp Bestival this year. There was rain, there was mud, but there was soooo much fun to be had. We didn't let it rain on our parade, instead we danced in the drizzle.

The thought of a muddy and wet festival with kids sounds awful, but actually, it really wasn't so bad. We went to Camp Bestival last year and it was glorious sunshine the whole time. Sure, rain makes things a bit more difficult, but honestly, we all had such a blast that it didn't really matter. Sort of. Our group got the Blitz spirit and laughed through it all. At the beginning, a little bit of drizzle had everyone running for cover. Then the heavy rains came. By the end drizzle was no longer considered enough of a reason to even put on a coat.

Last year, I went with my husband and two kids. We told so many friends and family about what a great time we had that loads of them got tickets and we went in a big group. My sister from Vancouver had sneakily eloped in Ireland the week before the festival, so they came with her 10 year old stepson for a honeymoon! My younger sister from Toronto came over for the festival as well. She's single and we checked her Tinder app to see if we could locate any hot uncles. Not one! No devious daddies on the app either. Good.

Joining us was one of my husband's best friends, his wife and their daughter - who celebrated her first birthday at Camp Bestival. The lovely ladies at the Dorset Women's Institute even baked her a beautiful cake and brought it to the site for her! She was one of the younger kids at the site, but there was plenty for a little one to do, and even a soft play to escape the rain. We also quickly learned that a pushchair is absolutely no match for mud, but luckily they had a sling. 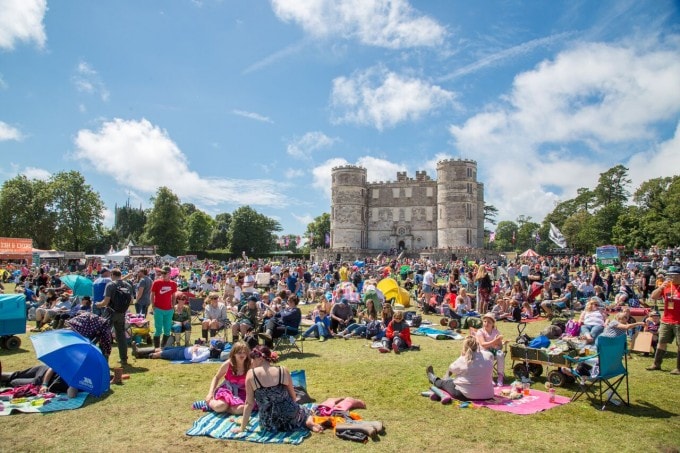 Look! There was some sun, I swear! It didn't last, but it was there and BOY did we all bask in it. It is much easier when you can throw a blanket down and sit on it, rather than shelter under it out of the rain!

There's so much more than music and food  at Camp Bestival. Much, much more.

The Dingly Dell is a forest area for kids, with playground, paths to explore, mud kitchen, petting zoo, crafts, wood to build with - and that's just ONE part of the site! Given the weather, a favourite pastime for a lot of kids was sliding on their bottoms down a muddy bank. There's a wine stall next to it, so you know, grab a glass and let them go for it. Camp Bestival is a time for kids to be feral. I swear my five year old daughter matted her hair into one large dreadlock within an hour of arriving. 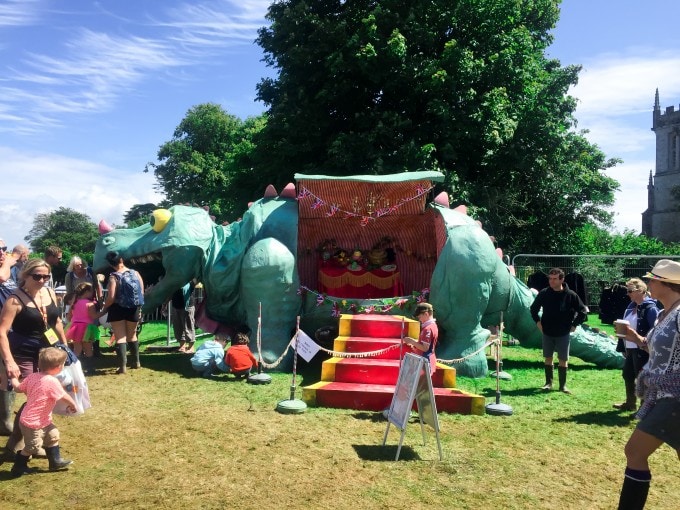 There's pop up theatre, like this impressive Iguanadon. Just behind it is a large area of circus games for kids to play, plus the fab Feast Collective - with bars, street food and coffee stalls. In the picture above you can just see the castle to the right. You can stand there and get a great view over the main stage - while staying away from the crowd.

There's also a lower kids playground with helter skelter, loads of craft tents, The Greatest Tent on Earth and much more. There is no way you can make it to everything over the long weekend, so it's best to just let it all unfold around you. Nobody will ever be bored. 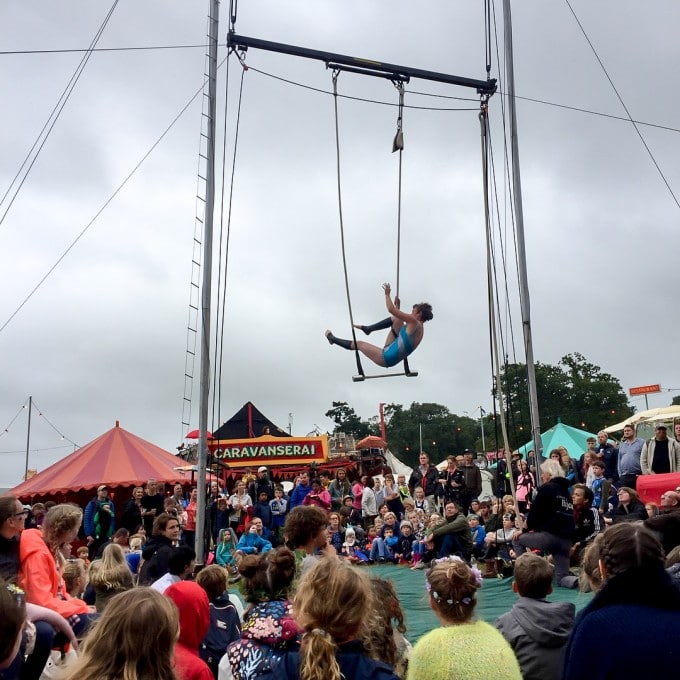 My favourite place at Camp Bestival is the Caravanserai. It's a crazy, gypsy-esque mad area where you can sit in an old dodgem car, grab a cider and watch a woman sing while hanging off a trapeze. What's not to love about that? The kids can busy themselves chasing bubbles or climbing in a huge structure made of old pieces of cars and trucks. They can have a dance, eat an ice cream or play with the nearest child. I promise you, your children will never be bored. Not for one single second. 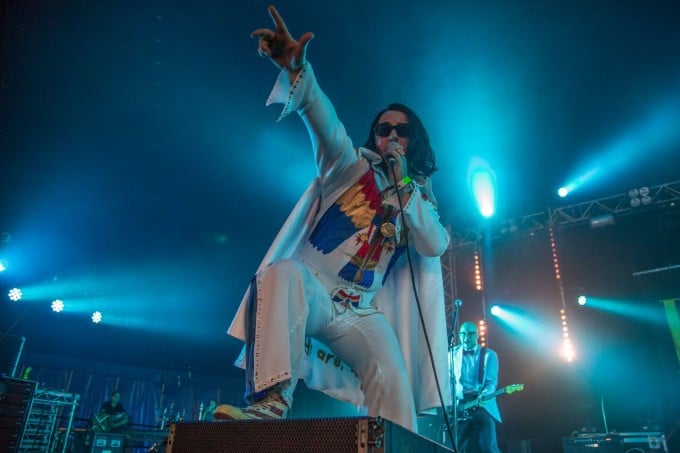 Elvana - Elvis fronted Nirvana. Seriously, do I need to say any more? It was AMAZING. The Big Top was so packed for this spectacle that we sent a few of our party to the front, while the rest of us watched with the kids from outside in the drizzle. The rain didn't matter. We were just all so pleased to get to hear it! The jumpsuit-clad frontman was funny, engaging and had the whole crowd enthused.
They would mash up Elvis and Nirvana songs in the same key, flitting between them. Absolutely sensational. 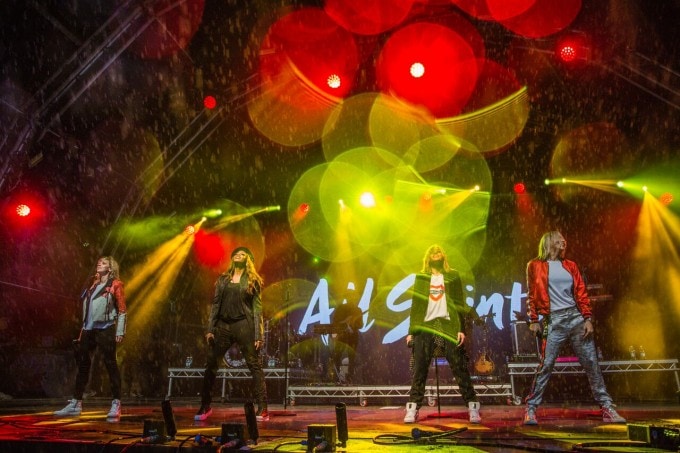 My younger sister was a huge All Saints fan back in the day, so we left the kids with daddy, donned our waterproofs, grabbed a load of vodka (ahem) and headed for the main stage. It was the worst of the rain, but still a load of hardy fans just danced, sang and partied like it was 1997. Adidas shell toes were replaced by wellies and cargo trousers were replaced by waterproofs, but the crowd sang their little hearts out to Never Ever and all the big hits. 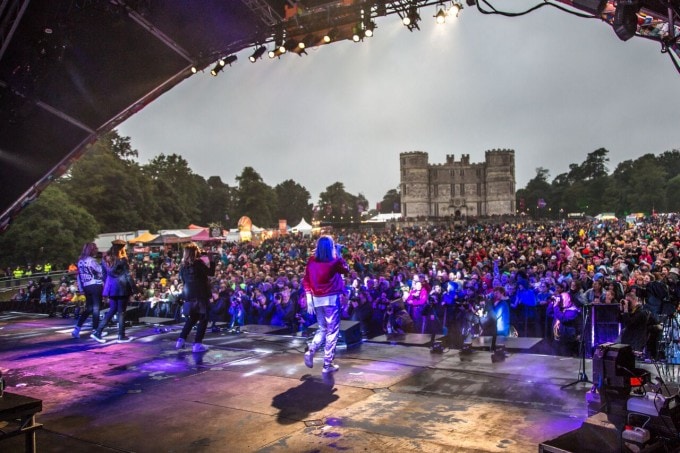 Enthusiasm sums up Camp Bestival. The rain didn't stem the crowds (much) and we all discovered that wellies are made for dancing in (sorta). One thing I love about the site is that we could sit at the tent having a coffee and faintly hear T'Pau belting out China in your Hands. We could be doing crafts with the kids, soundtracked by The Rajasthan Heritage Brass Band. Walking from the Big Top to the toilets and we could watch Sara Cox revving up the crowds with 80s dance floor fillers. When we got home, my 7 year old son walked past me singing 'Jump Around' and my daughter seems to have picked up a new found love of vintage, thanks to the wonderful music spun by the Shellac Collective.

The Food at Camp Bestival 2017 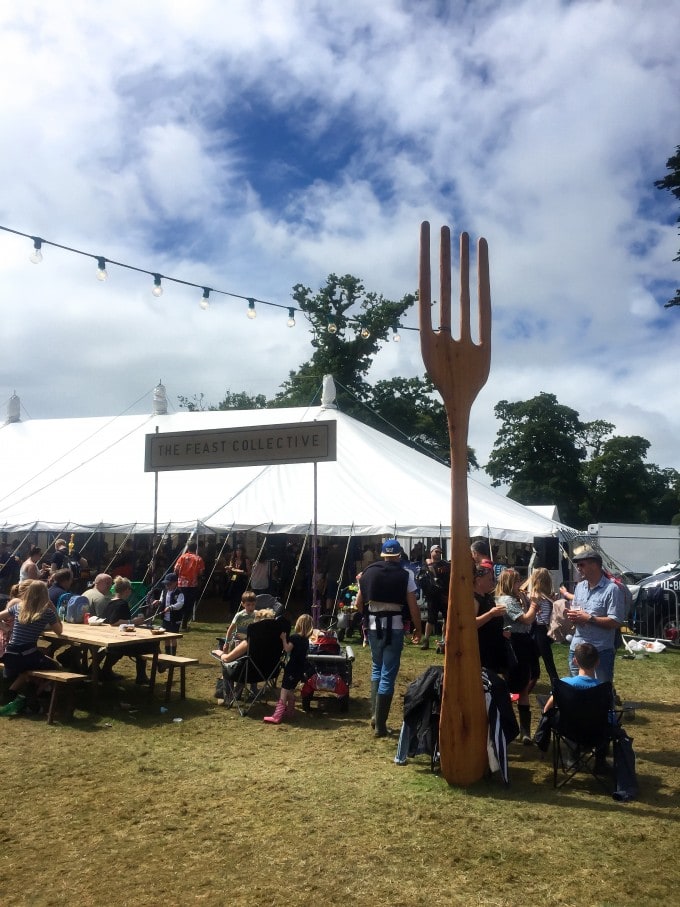 The Feast Collective is the place for food at Camp Bestival. It's a foodie haven where some of the most exciting food producers gather to feed hungry festival-goers. Sure, there are stalls dotted all around the site, but here there is some truly amazing street food. You can find everything from Ghanian food from Zoe's Ghanaian Kitchen, coffee at Firestation Coffee and ice lollies from Polar Pops - made with natural blended fruit and veg. 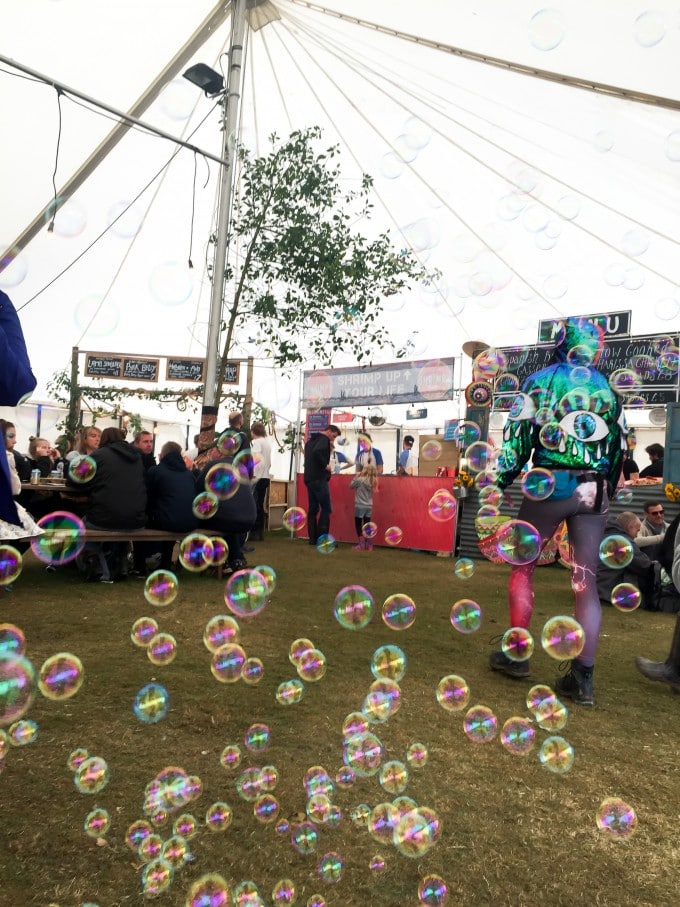 The Feast Collective has loads of big communal tables plus a tent where kids can take cooking classes. Last year there was a massive meat roasting right outside, which, as a veggie, was very off-putting, but luckily they tucked it off to the side this year so I could walk in without my stomach turning first! 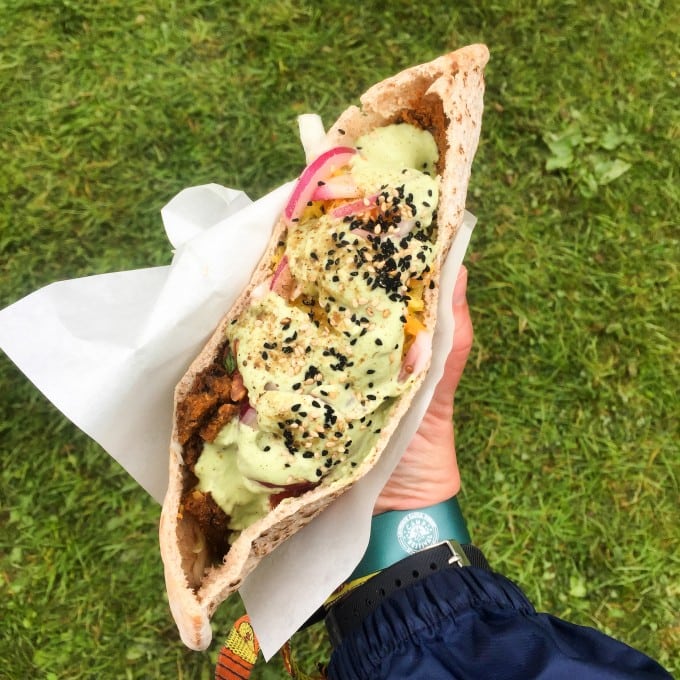 My friends loved the buttermilk fried chicken, which seemed to always have a long queue, but I adored Milgi. The vegan stall was also popular and I absolutely adored their vegan doner kebab. It was sooooooo good. I'll admit to having it for both lunch and dinner one day! My meat-eating friend tried it and then chose it for his lunch. I swear, I'm still dreaming about it. So, so good. Just gaze at it there in the picture - lovely salads, amazing sauces and that perfectly spiced 'meat' made from chickpeas and seasonings. 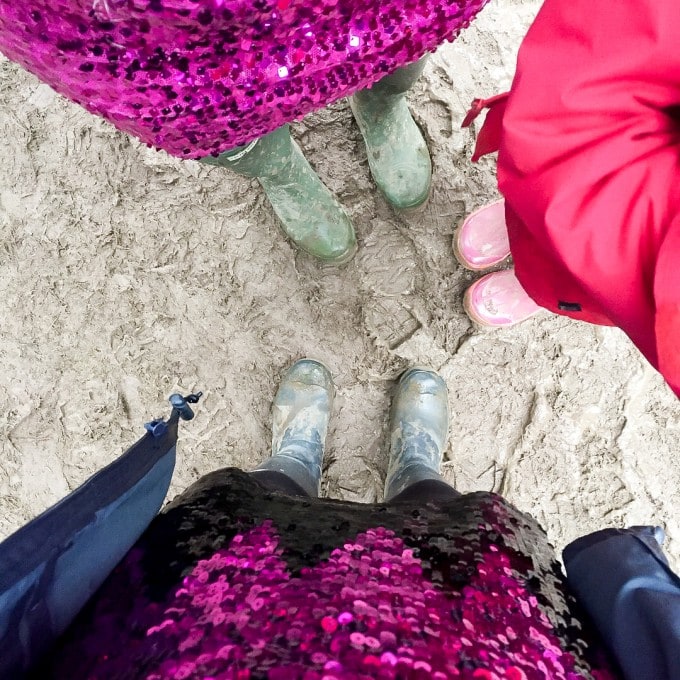 There's no getting around in it (in fact, at times there literally wasn't any getting around in it), there was a LOT of mud. Organisers had anticipated rain, so plastic walkways were set up in some high-traffic areas, but it just wasn't anywhere near enough. At times it wasn't possible to pull our sleeping kids in their trolley, so we just admitted defeat, dragged it to the World's Largest Disco Ball and danced for a while. We found some sticks to push mud out of the wheels and were soon on our way again.

Now, we grown ups might have found the mud a bit of a slog, but my kids? They were in muddy puddle heaven. I had plenty of spare clothes for them, so I zipped on their waterproof coats, popped on their wellies and let them jump to their hearts content while we watched shows and bands. Everyone was happy. In the middle of the biggest downpour, as my five-year-old stood in ankle deep mud outside the big top, I asked her if she was having fun. Her reply? "Mum, this is the best day ever. Can I have an ice cream?" And hey, in a downpour there's no queue for ice cream - win! 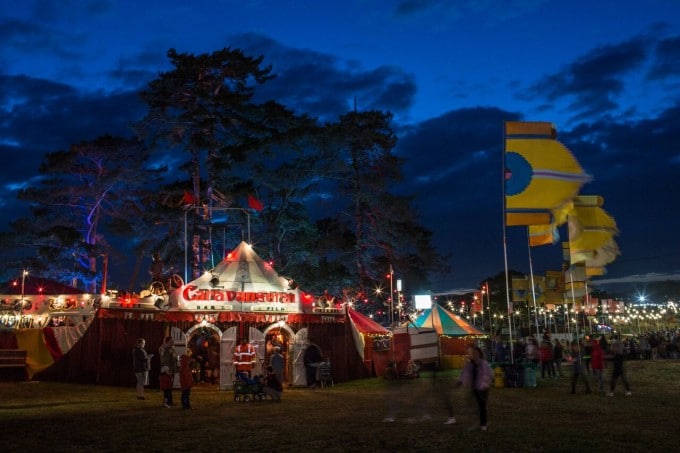 Just because there are kids around, doesn't mean the adults want to stop the party early. The Caravanserai is amazing at night. We saw two modern brass bands compete in a 'brass off', we saw unusual street performers and we listened to amazing music. There are bars in there so it's a great place to pitch up for a while at nightfall.

When the final band at the Big Top finished, they kicked us all out and everyone dutifully queued up. Back in we went, armed with headphones for a silent disco. With people listening to different tracks, it was all about losing yourself in dancing. The place was packed (not uncomfortably so) and it was a great atmosphere. If you dared to take off your headphones, you'd be met by a chorus of people singing badly to different songs. 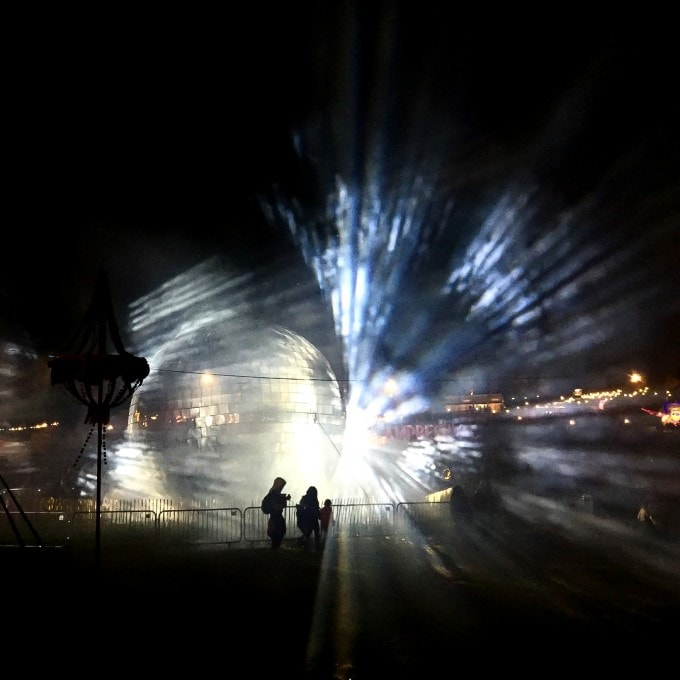 If you haven't been to Camp Bestival before, you might be wondering how to deal with little ones in the evenings. Well, like many others, we just got to work practicing our questionable parenting. We kept them up late, jacked up on ice cream and sweets. We dragged them around watching bands. We carried them when their little legs got tired. When it was too much, we tucked them up in their trolley and danced next to them. Extra blankets for the trolley are a must, as are ear defenders. At one point my son said he preferred wearing the ear defenders as he could just hear the music and not all the grown ups' 'chitter chatter'. That's us told. 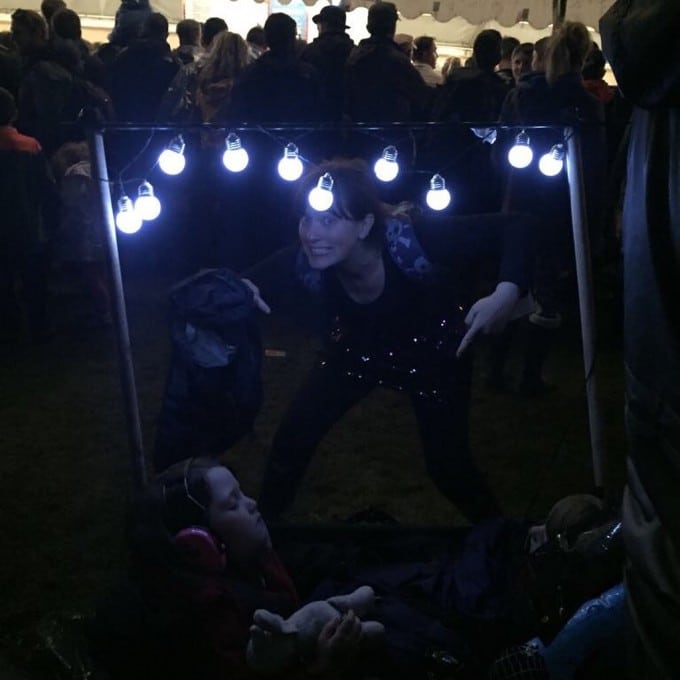 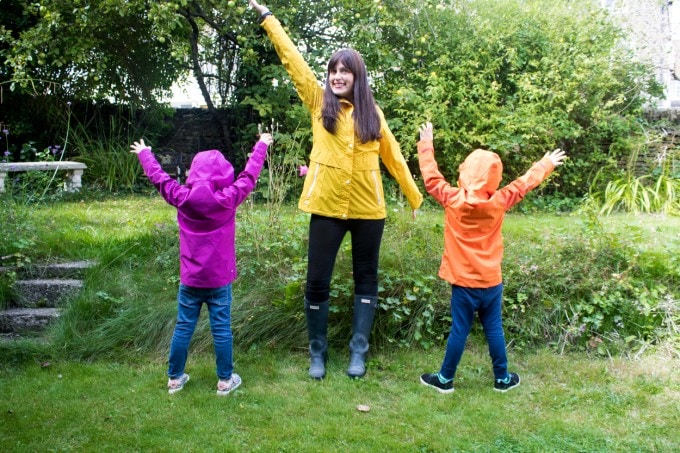 Camp Bestival has tents where you can get wristbands with your mobile number on for the kids. It's important to do that (and I saw some kids with phone numbers on their arms with sharpie pens; others with phone numbers in pen on their t-shirts), but another help is distinctive clothing. Your child getting lost is horrible, and we helped two children locate their parents via the many security guards. Neither had phone number wristbands. Get them, people! Both children were reunited with their parents in minutes. 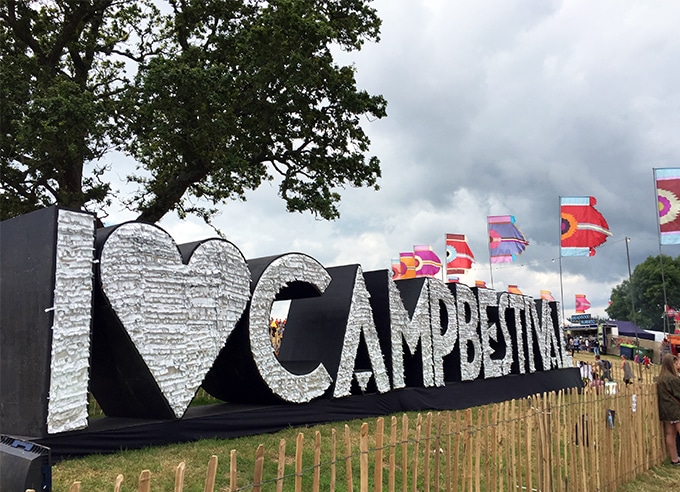 Don't even think about the weather. Just go and book those early bird tickets now. You can always pack ponchos. We had the worst weather in Camp Bestival's 10 year history, and we still loved every minute (well, maybe not when we were caught in particularly driving rain with the kids getting upset). Still, I took the rain for you, so next year you'll be due glorious sunshine. I'm good to you all like that. Takin' it for the team, ya know?

Disclosure: Thanks for reading my Camp Bestival 2017 Review. My family went to the festival as guests of Camp Bestival and paid a charitable donation.