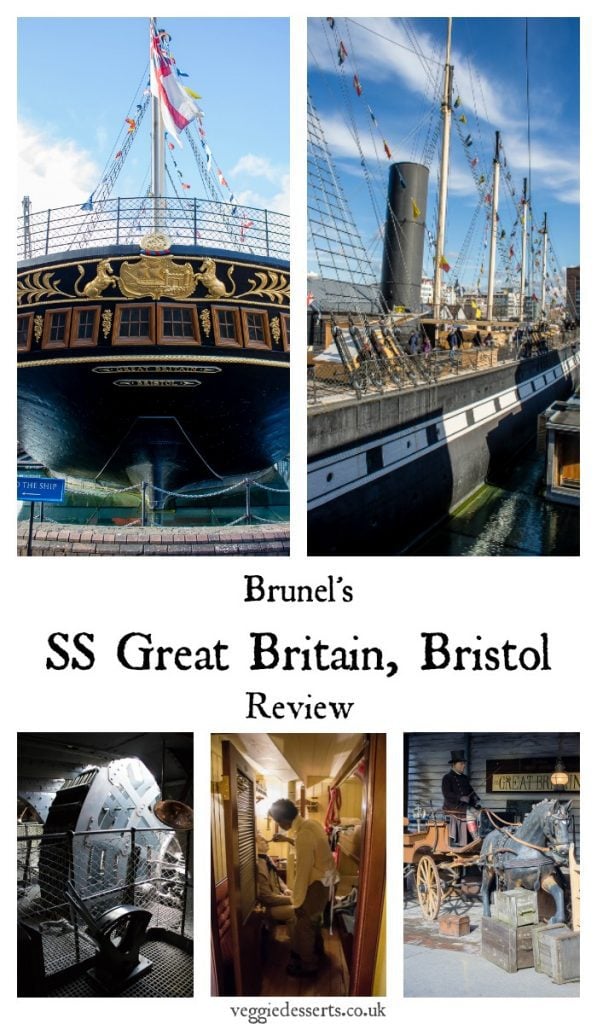 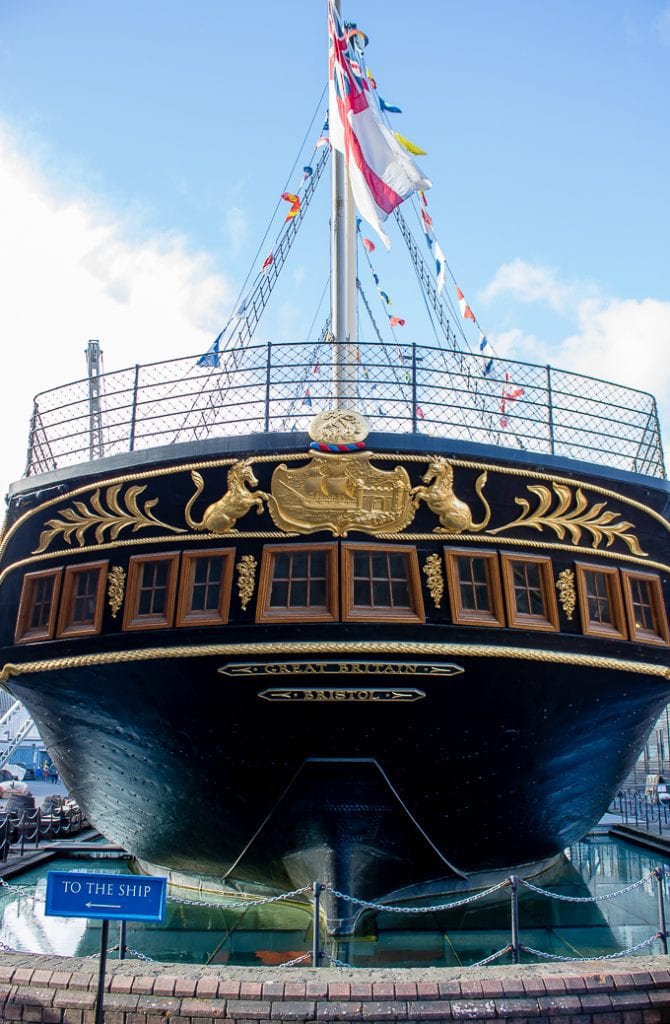 Before I launch into my review of the SS Great Britain, I have an amazing competition to share with you all.

NOW CLOSED I've teamed up with Oreo to bring you an great giveaway where you could win £100 voucher for a Virgin Experience!

I’m working with Oreo and BritMums promoting the #OreoCookieQuest - celebrating wonderfilled family moments and The Great Oreo Cookie Quest. They asked me to take my family on an exciting adventure and share it with you.

We chose to head to Bristol to check out Brunel's famous ship, the SS Great Britain and you can scroll down for my full review. 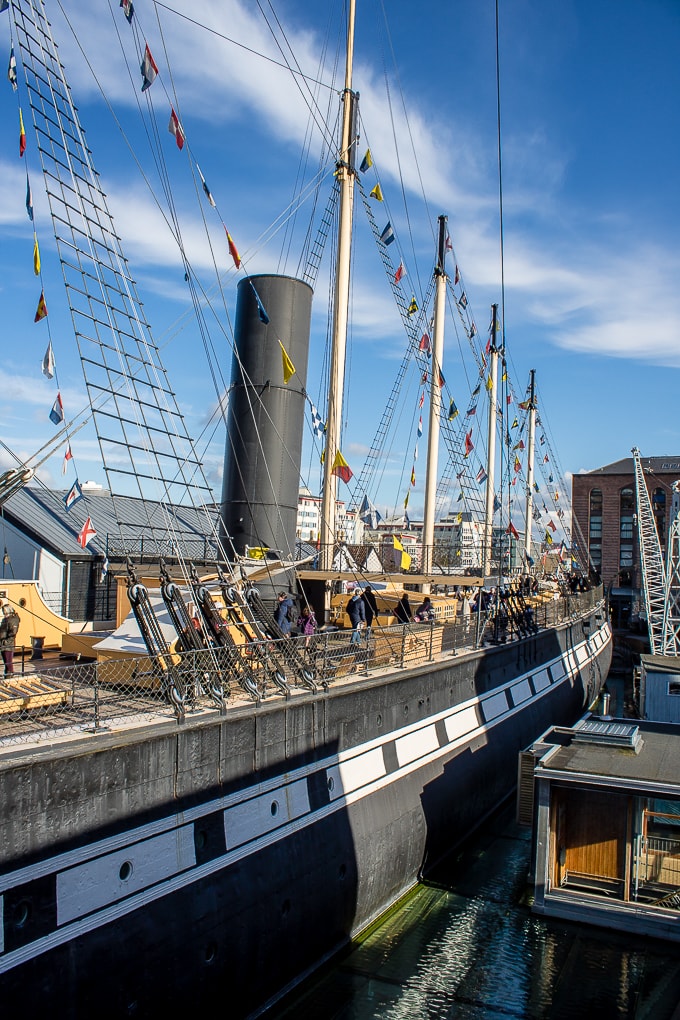 I headed out to Bristol with my husband and two children for our adventure on the SS Great Britain.

We lived on a narrowboat in London for six years, until my daughter was born. We could handle one toddler on a boat, but two seemed a bit much! We're landlubbers now, but we always embrace all things nautical.

So, we grabbed a packet of Oreos, lifted the anchor and set sail (well erm, piled into the car) for Bristol and Brunel's famous ship. Ahoy!

What is the SS Great Britain?

Isambard Kingdom Brunel's SS Great Britain was launched in 1843 and was the greatest innovation of the Victorian age. This is the ship that changed the way we travel, due to it's groundbreaking 'vee' engine.

At it's launch, the passenger steamship was the world’s largest and fastest ship. The luxury ship was able to hold enough coal to power it's 1000 horsepower steam engine, and able to sail from Bristol to New York - completing the journey in just 14 days.

However, the company soon ran out of money due to the high cost of building the vessel and refloating her after running aground on the coast of Northern Ireland.

In 1852 Great Britain was sold for salvage before being repaired and used to transport immigrants to Australia until 1881. She was then converted to sail rather than steam and retired to the Falklands to become a floating warehouse until 1937.

In 1970 the ship was towed back to Bristol and eventually turned into this museum ship. 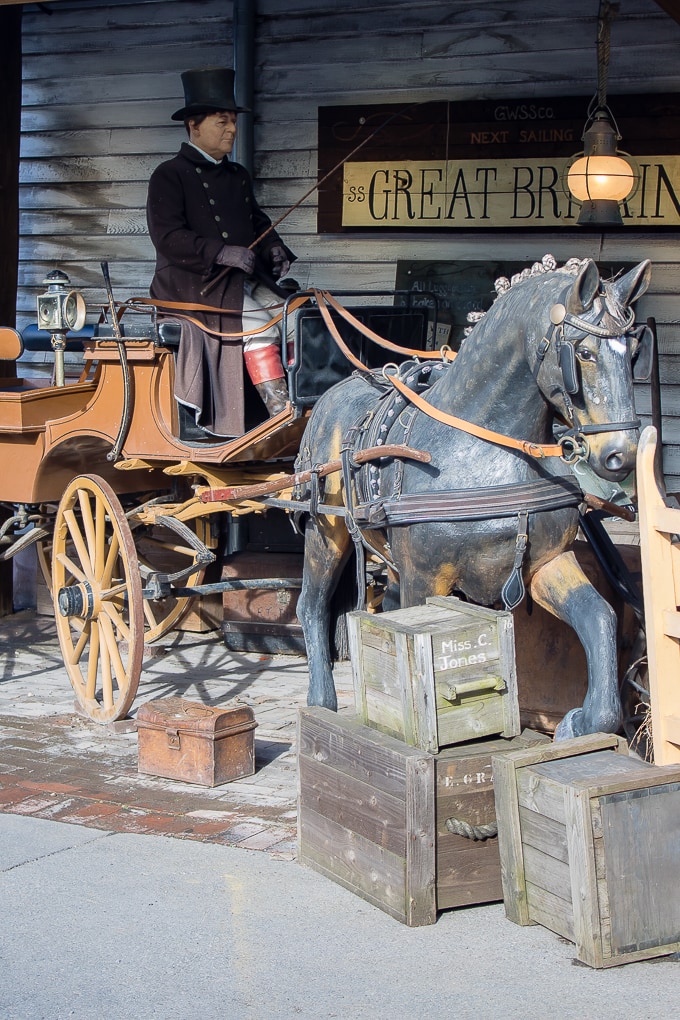 What you need to know for your visit

It takes about about 2 hours to explore everything, a bit longer if you want to read all of the information boards (my kids just wanted to keep moving on to the next display!).

It's £45 (correct at time of writing) for a family ticket for two adults and two kids.

But the best part is you can return as often as you like within 12 months. That's great as there's a lot to see. My husband and I are looking forward to returning without the kids so we can read more of the facts and information. The kids can't wait to return again soon too.

There are plenty of indoor spaces so you can visit in all weathers. 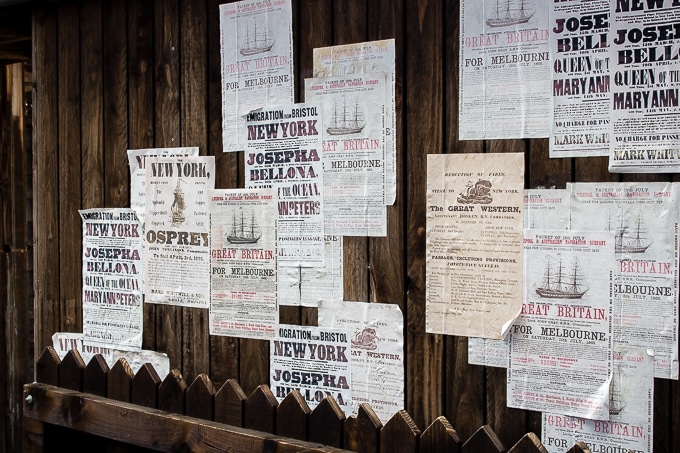 Before we went, I wondered how family-friendly the SS Great Britain would be. I worried that it might be a bit dull or not keep the kids' attention. I was very wrong! There's a lot for kids to see and activities such as stamping their tickets around the Dockyard Museum or choosing their boarding card.

We went on the half term and there were Victorian characters wandering around, plus there's an area where you can dress up in Victorian clothes and take photos.

We were also given cardboard wheels for the kids to go on a treasure hunt around the ship.

There are lifts and alternative entrances to make the attraction suitable for buggies and wheelchairs. The original cabin rooms are narrow, but they have narrow wheelchairs available free of charge.

The main Dockyard Companion leaflet has a map of accessibility and locations of accessible toilets, lifts, ramps and baby changing facilities. 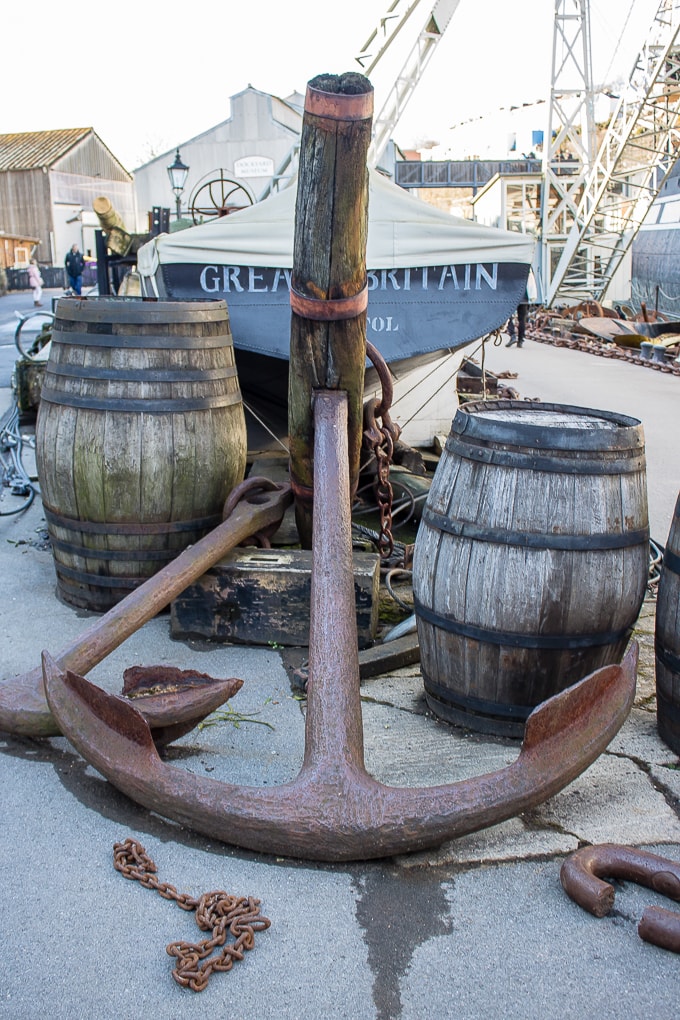 From the moment you enter the cobbled outside of the dockyard, you're thrust back to Victorian times. With the vintage travel posters to stacks of luggage, it's easy to imagine you're about to be set off on an epic adventure.

Enter through the gift shop and wander out into the dockyard where the stern of the world's first great ocean liner looms grandly before you.  Where you see the water at the base of the ship is actually a the glass ceiling of the dry dock.

Not just to give that sense of being under water, the glass seals out moisture to avoid further corrosion of the historic hull. It also helps to insulate the dry dock and reduce energy costs.

The humidity levels are noticeably dry as you enter the dock, and they keep it at the same level as an Arizona dessert, through the use of dehumidifiers. The dry air creates an interesting sensation considering the feeling of being under the sea.

Wander down and you feel as though you're under water, as the bustle of Bristol ebbs away. 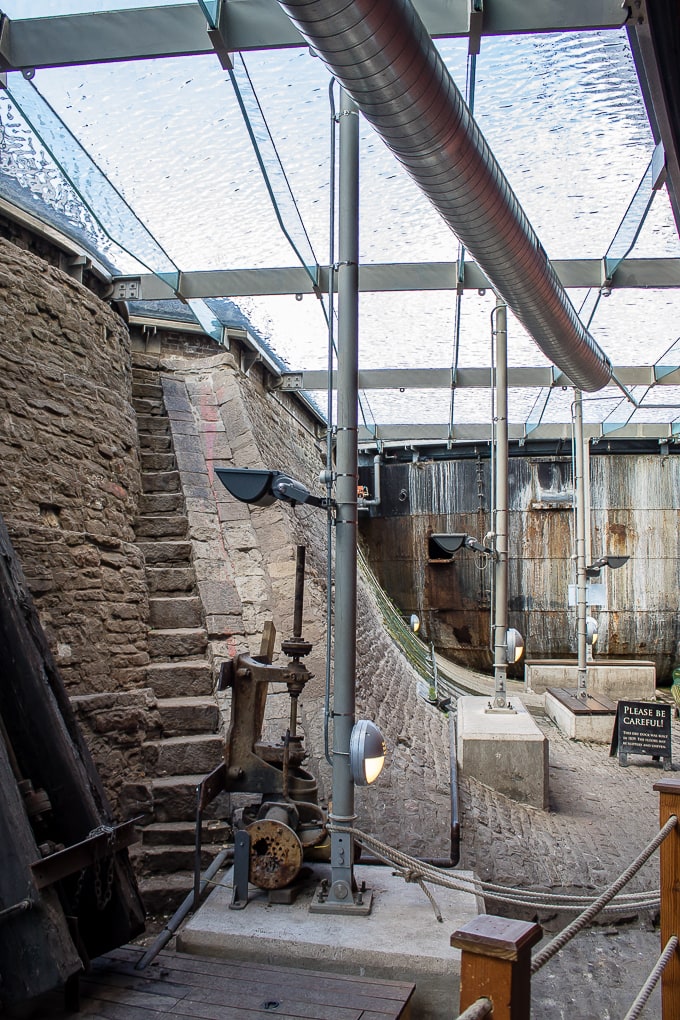 The iron hull of the ship, complete with all of it's scars and corroded pockmarks, are wonderfully visible from this subterranean dock. Every rivet seems to tell a tale as you walk around the hulking ship towards the revolutionary propeller.

This is exactly as the ship was when it was rescued from the Falklands in 1970 after many long years of service, from luxury liner to floating warehouse. 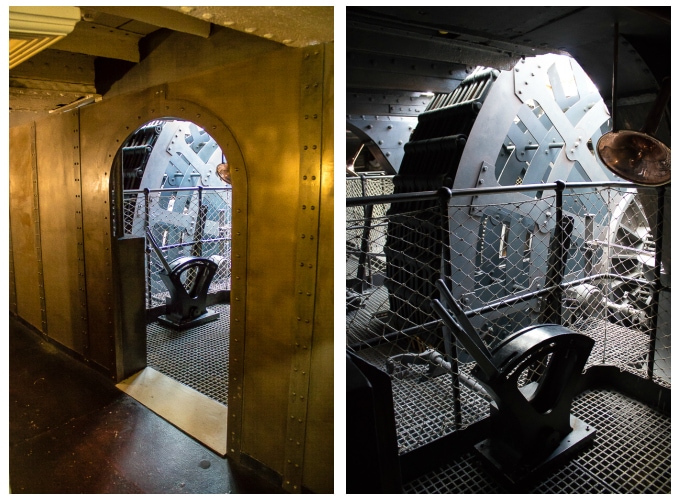 At the heart of the ship is a full-scale working replica of Brunel's 'Vee' Engine. The change from the wooden interior of the ship to this stark metal industrial section and dominating engine really show how innovative Brunel's engineering was. You can walk all around it to get a great view of the 1000 horsepower steam engine's workings. You can see the engine turning, hear the sounds of stokers shovelling coal and also smell the engine room's oil and coal.

The 1845 engine gives a snapshot of a moment in engineering history. Boiler design developed rapidly during the 1840s, with engines soon able to operate at much higher pressures than the ss Great Britain’s 5lbs/sq inch.  So the 1845 engine soon became obsolete and was soon replaced. The ss Great Britain was converted from a steam ship with auxiliary sails, to a sailing ship with auxiliary steam power, carrying enough coal for the long voyage to Australia. This smaller more efficient  engine design served the ship between 1852 and 1876 when the ss Great Britain was converted to a sailing ship.

Visitors today can see the engine turning, hear the sounds of stokers shovelling coal, and also smell the engine room and its oil and coal. 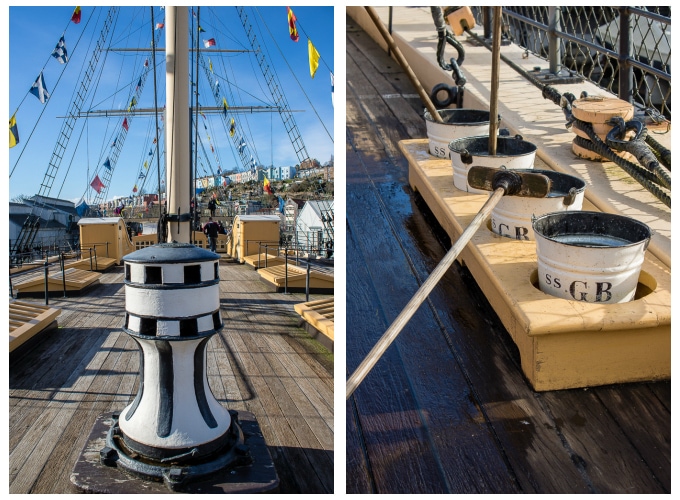 Out on the deck, there's a lot for families to explore. Try swabbing the decks or book to climb the rigging to feel like a real Victorian sailor! Head to the ship's wheel or view the rivets on the steam funnel. 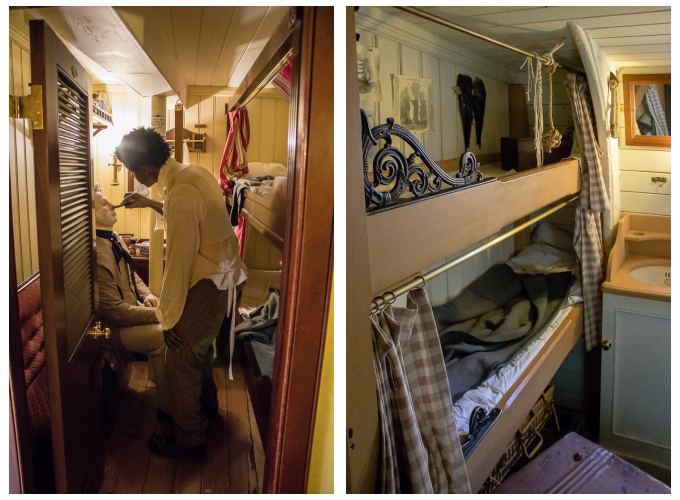 One of the parts we liked the most was peeking into lots of cabins. You can see the models having a shave, above, as well as sleeping and even a second class passenger feeling a little 'squiffy'. My kids found that hilarious.

I love the way they use senses to transport you to the Victorian ship. The bread oven has the aroma of bread and some rooms have audio of the passengers talking. 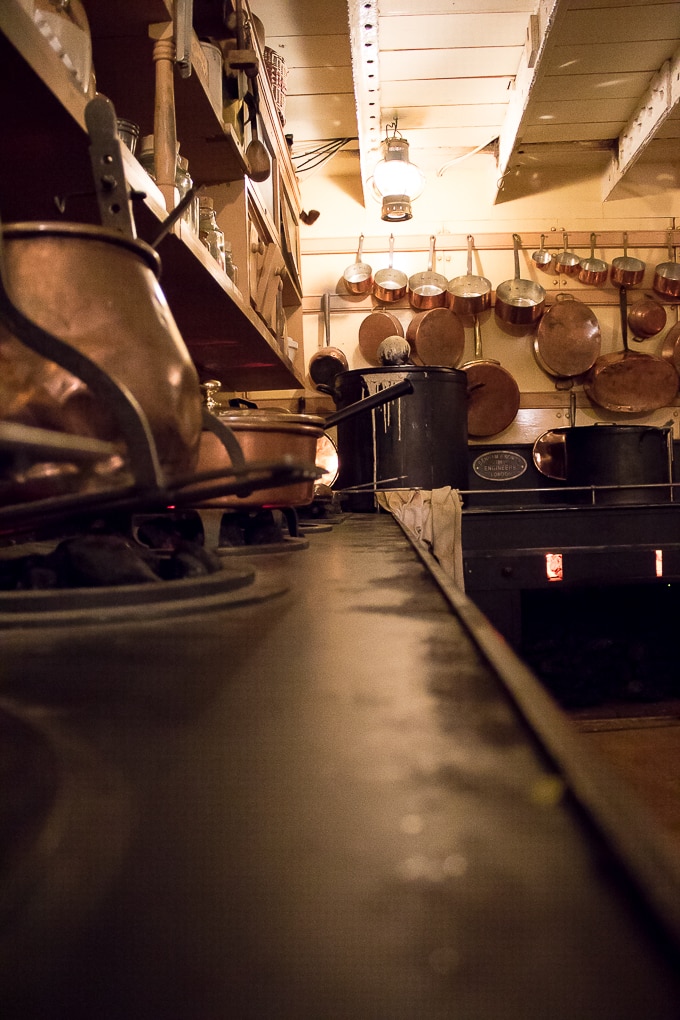 The kitchen/galley setup on the ship is quite large and there's even a cook. With smells and sounds it instantly transports you back in time. I didn't want to spoil it all for you, so this is just a little shot of a corner of the impressive kitchen.

You can walk into the bread oven area and smell the aroma of freshly baked bread, mingling with the smell of the burned coal. It's quite enchanting. 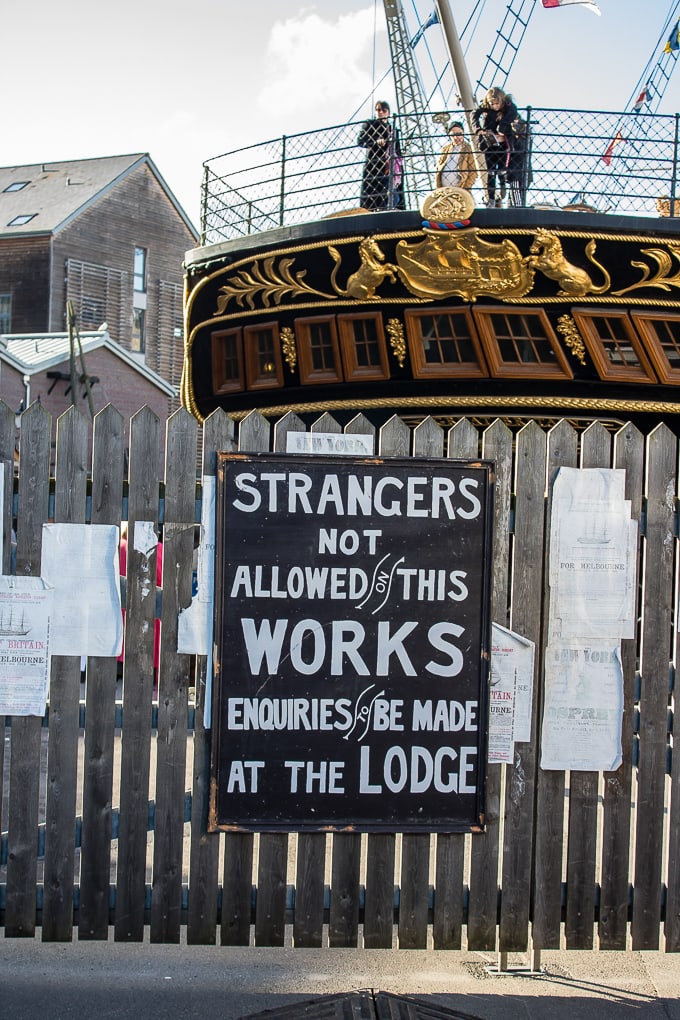 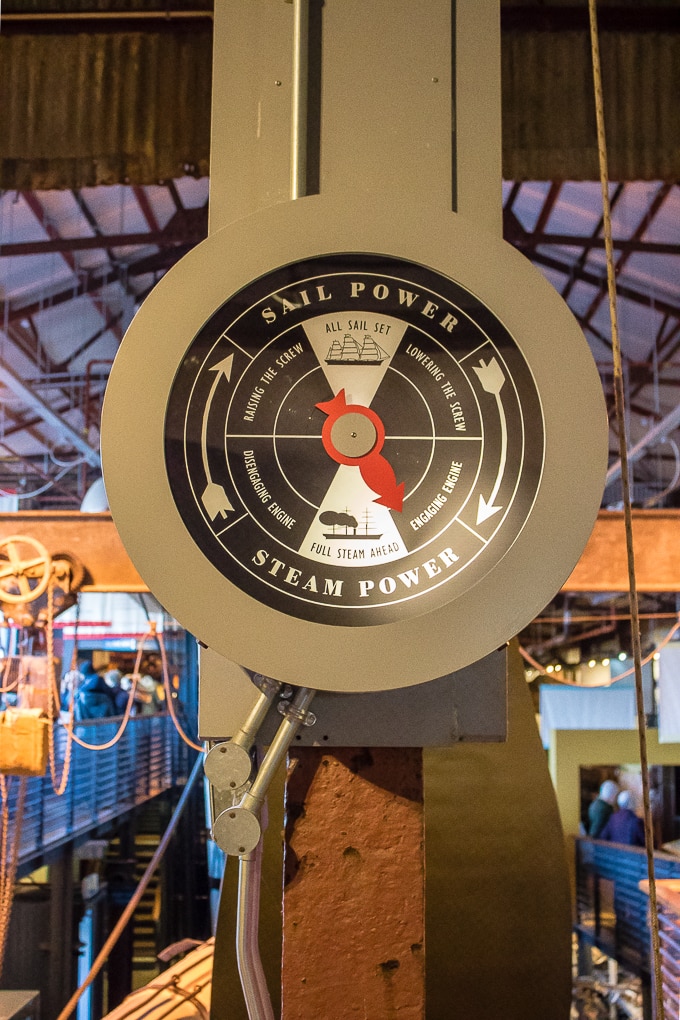 We had a great time at the SS Great Britain. There's a lot for both adults and kids to learn about and interact with, from peering into cabins to dressing up in Victorian clothes. The ship museum is engaging and very well done, with plenty to see and do whatever the weather. Our ticket gets us in for 12 months, so we'll definitely be back soon.