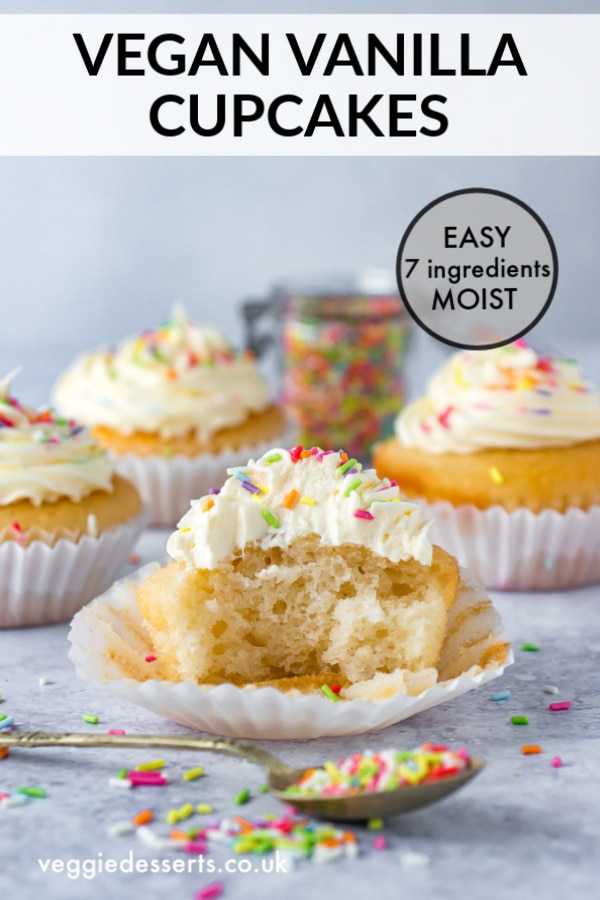 This Vegan Vanilla Cupcakes recipe is so light and fluffy that nobody would guess that they're eggless and dairy free! It's a super easy 1-bowl recipe that's light, moist and delicious. You only need 7 ingredients and 20 minutes.

Ever since I made my vegan chocolate cake a few years ago and it turned out AMAZING, I've been obsessed with creating the best vegan cake recipes.

But as much as I love cake, I love cupcakes too!

You only need 7 ingredients and 20 minutes!

It's an easy one-bowl recipe that never ever fails me.

I've made these babies many many times and they're always a HUGE hit.

I've decorated these ones with an easy vegan vanilla frosting and some sprinkles!

They're perfect for a birthday, party or treat.

I've been tweaking my vegan cake and cupcakes recipes to make the best ones and you don't need any flax, chia, egg replacers or anything like that!

Instead, I make a 'buttermilk' by souring vegan milk with lemon juice or vinegar.

That reacts with the leavening agents in the baking powder and makes them soft, fluffy and delicious!

These vegan vanilla cupcakes are so fluffy that nobody would guess that they're vegan.

That means they're perfect if you don't actually need a vegan cake recipe, but are looking for one that's dairy free.

You can use any type of dairy free milk: soy, almond, coconut, cashew, oat etc...

They all work perfectly!

According to the old saying, 'if you want to make a cake, you have to crack some eggs'.

And you don't even need any of the usual egg replacements like flax eggs, chia seeds, banana etc... Trust me.

These eggless cupcakes still have the same great structure, fluffy texture and nobody would guess that they're egg-free.

How to make vegan vanilla cupcakes - step by step

Here are the step by step picture instructions for these cupcakes. You only need 1-bowl, 7 ingredients and 20 minutes!

Scroll down for the full recipe in the recipe card.

1. Stir the vinegar (or lemon juice) into the dairy free milk, then set aside for 3 minutes to create vegan ‘buttermilk’.

3. Beat until the sugar dissolves.

4. Sift in the flour, baking powder and salt.

5. Gently stir the dry ingredients the mixture with a wooden spoon or spatula. Take care not to overmix, but ensure there’s no visible flour.

6. Spoon or pour the batter into the prepared muffin tray to fill each cup ¾ full.

7. Bake for 15 minutes, or until an inserted skewer comes out clean. 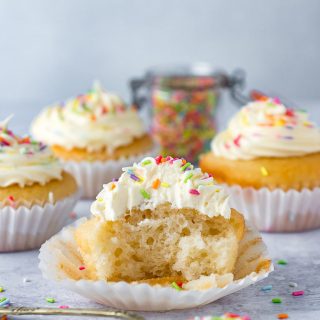 For the Vegan Vanilla Frosting

For the vegan vanilla frosting