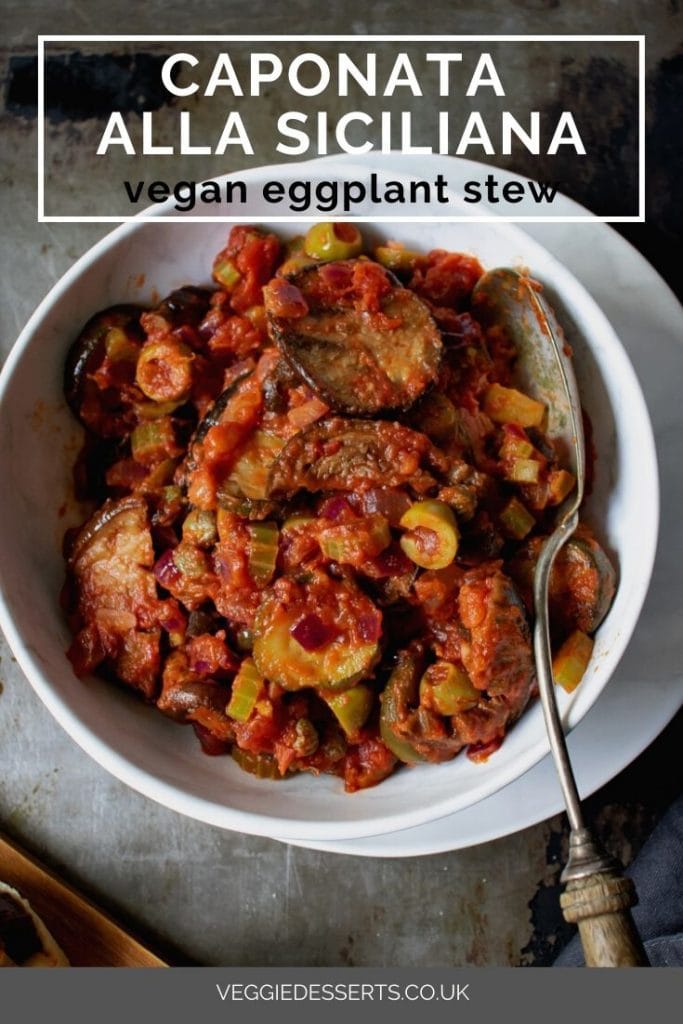 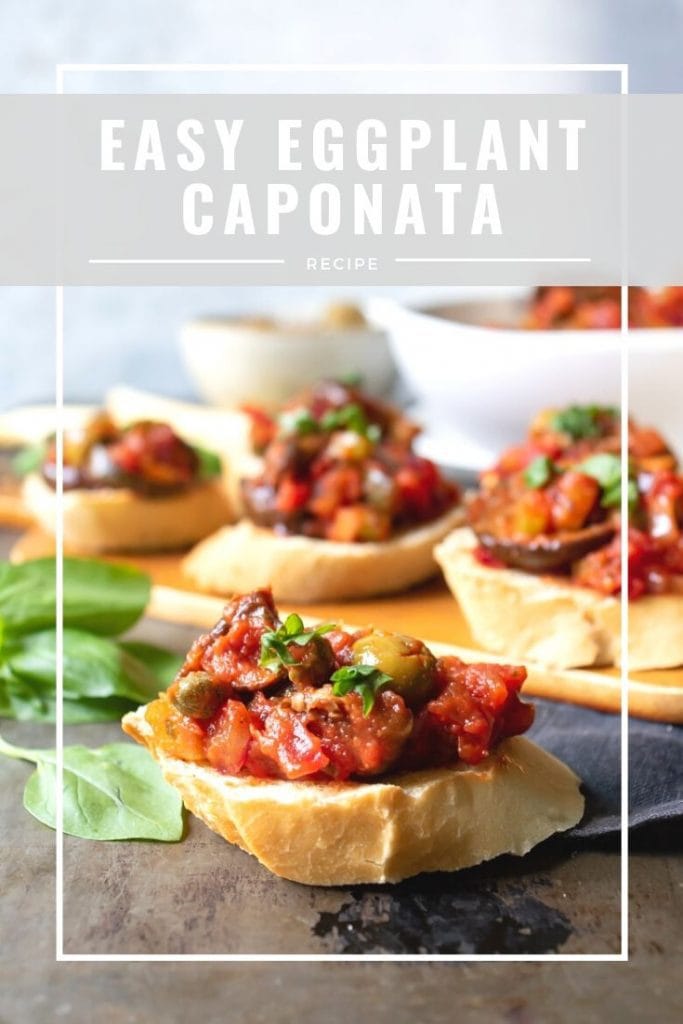 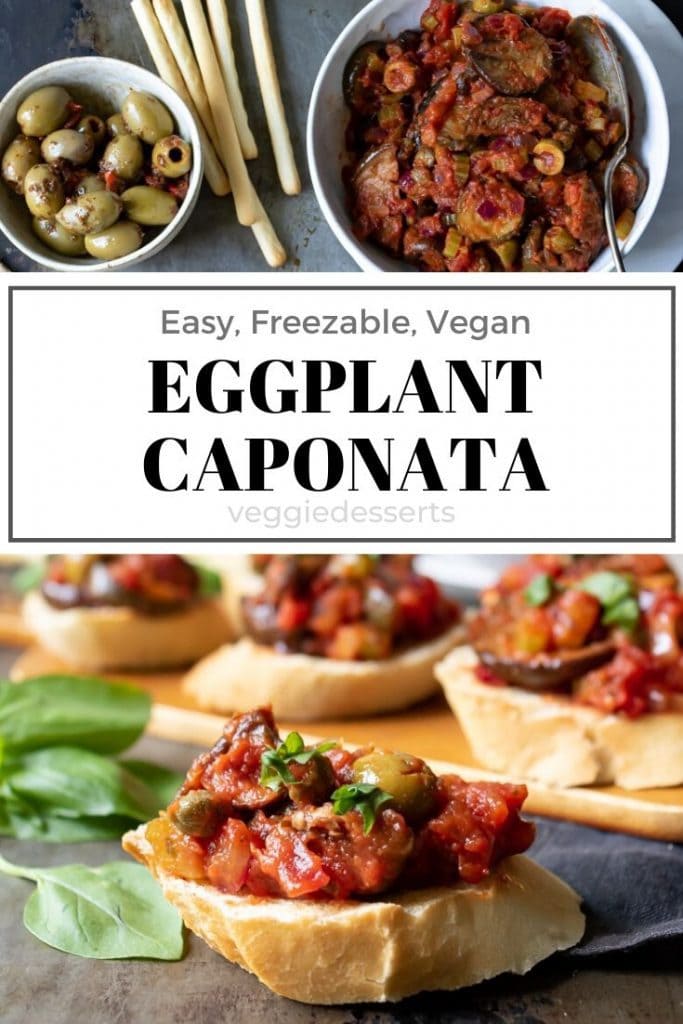 Caponata alla Siciliana is a traditional vegan Italian eggplant stew from Sicily. It's easy, versatile and great as a side dish, main or as an appetizer on crostini. 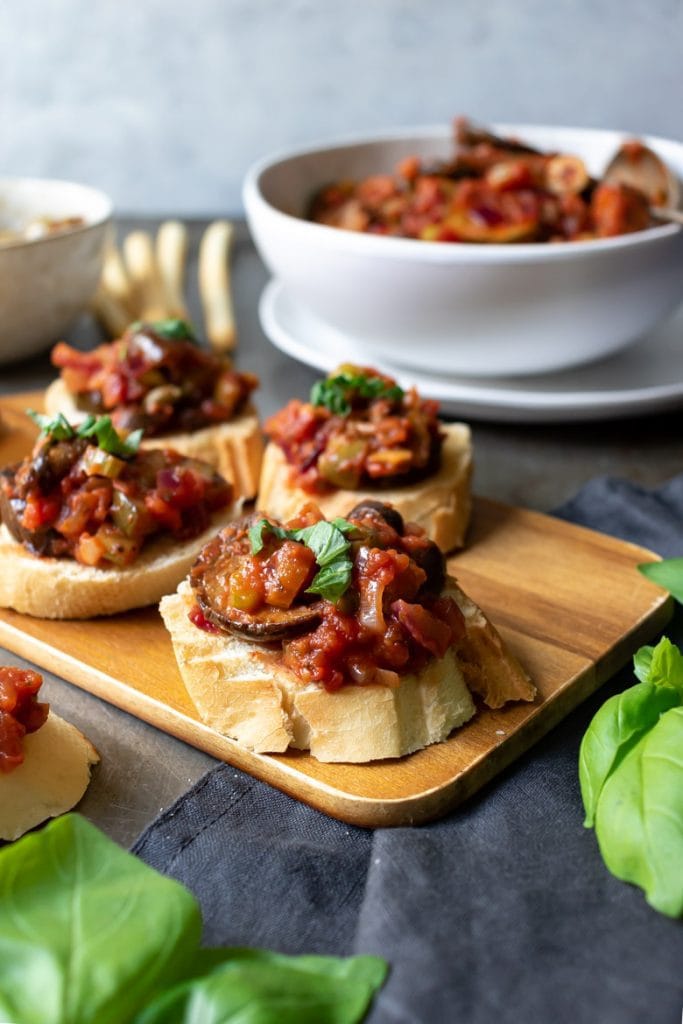 They say that every Sicilian has their own caponata recipe. Like most traditional recipes, it evolves over time and between families.

Generally, it's made of eggplant (aubergine), tomatoes, capers and olives. Many also add celery, zucchini and a little dark chocolate to lift the flavors.

Some people add raisins, other pine nuts. There are myriad variations, but this is my tried and tested go-t0 caponata recipe.

It's an easy stew that makes the most of late summer vegetables, but is now popular year round.

Caponata alla Siciliana a delicious dinner, side dish or appetizer. Plus, you can make it ahead of time and it's freezer-friendly.

Try it as a stew alongside Italian vegan Stuffed Peppers

What ingredients do I need for Eggplant Caponata? 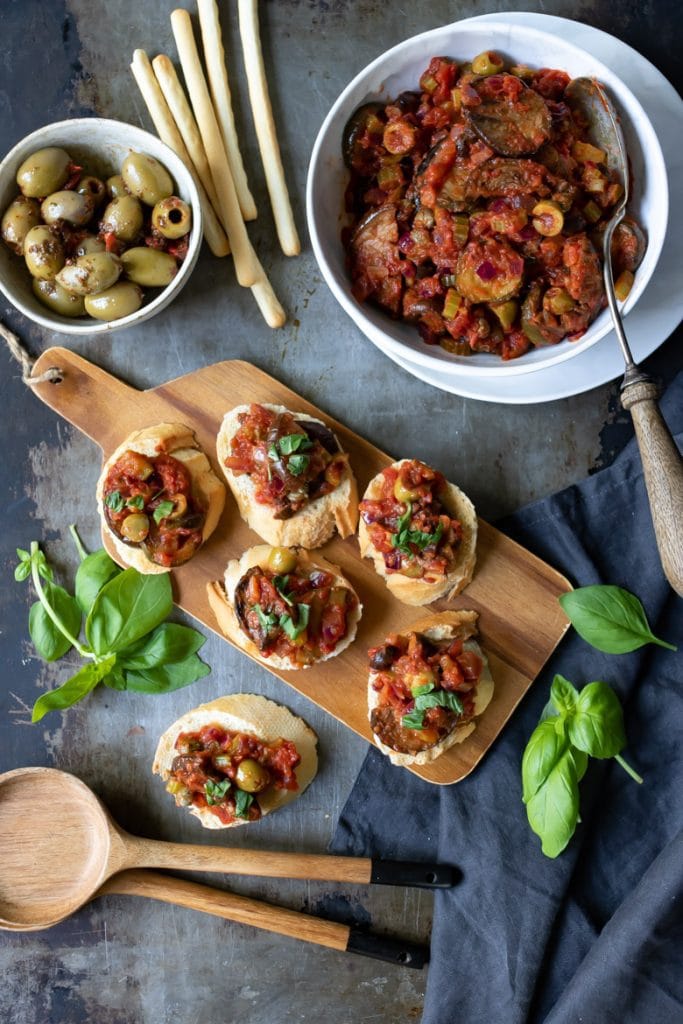 Tips and Tricks for Caponata Siciliana

Is caponata served hot or cold?

Can I freeze eggplant caponata?

Caponata is freezer-friendly. I usually make a double batch, then let it cool then store it in an airtight container in the freezer. It's good in the freezer up to three months.

Let it thaw in the fridge, then warm up in a pan. To thaw it faster, use a microwave or heat it from frozen in a pan, taking care that it doesn't scorch in the pan.

This caponata recipe is naturally vegan, vegetarian and gluten-free with no adaptations.

cIf serving it as an appetizer, don't use bread for gluten free. Instead, try it on small gluten free rice cakes or gf crackers.

Can I make caponata in advance?

Yes! In fact, I prefer Caponata Siciliana the next day. The flavors really get a chance to merge together and shine. You can make it up to two days in advance and store it in the fridge. 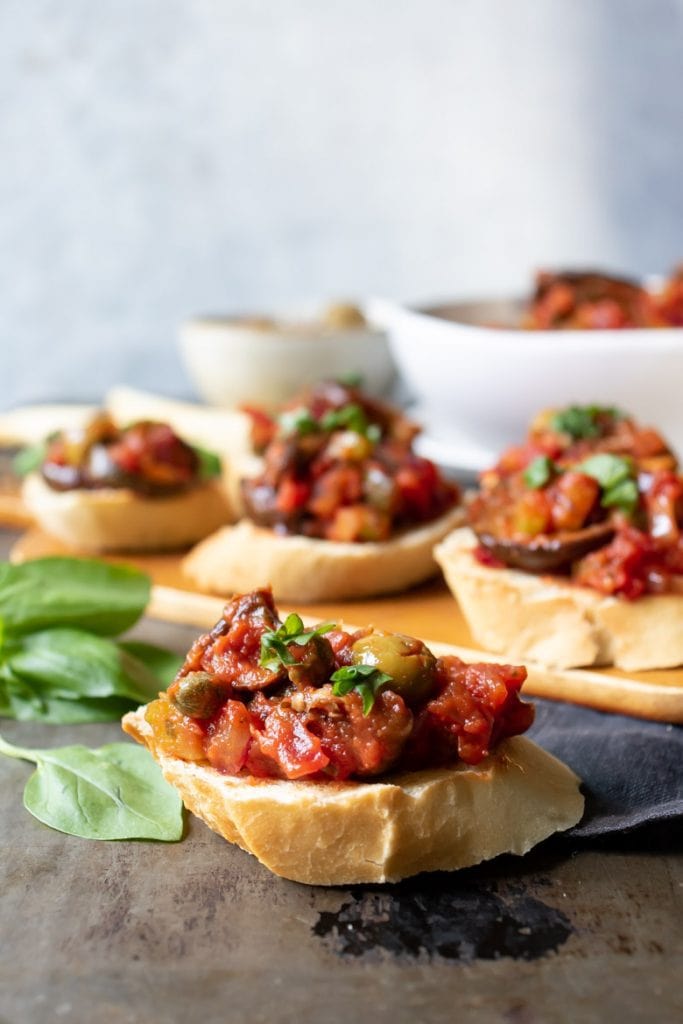 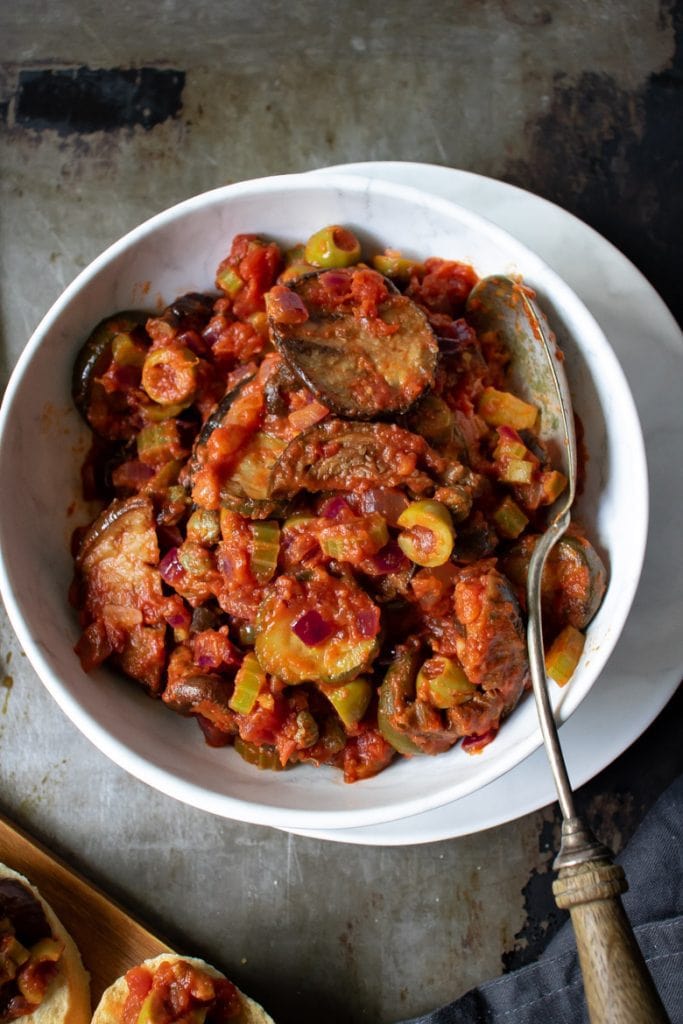 How to serve caponata

I love how versatile Caponata alla Siciliana is! Try it these ways:

Warm as a stew for a main meal. Try it alone, or with rice, pasta or bread.
As an appetizer with small spoonfuls served on thin slices of toasted bread.
As a side dish.
Enjoy it warm or cold.
As a warm salad.
As a caponata dip, with veggies and breadsticks.
Use it as a condiment.

We love it as a dinner vegan stew with rice or quinoa. It's rich, flavorful and full of tasty vegetables.

Caponata also makes a fantastic appetizer. I love that you can make it a day or two ahead, and then you just need to toast the bread, rub it with a clove of garlic, spoon on the eggplant caponata and serve! It's a great make-ahead appetizer or starter.

I also serve Caponata alla Siciliana as a side dish. I warm it up, then serve it alongside gnocchi (try my amaaazing quick fried gnocchi), pasta with peas or with my mushroom steaks for a delicious all-veg meal. 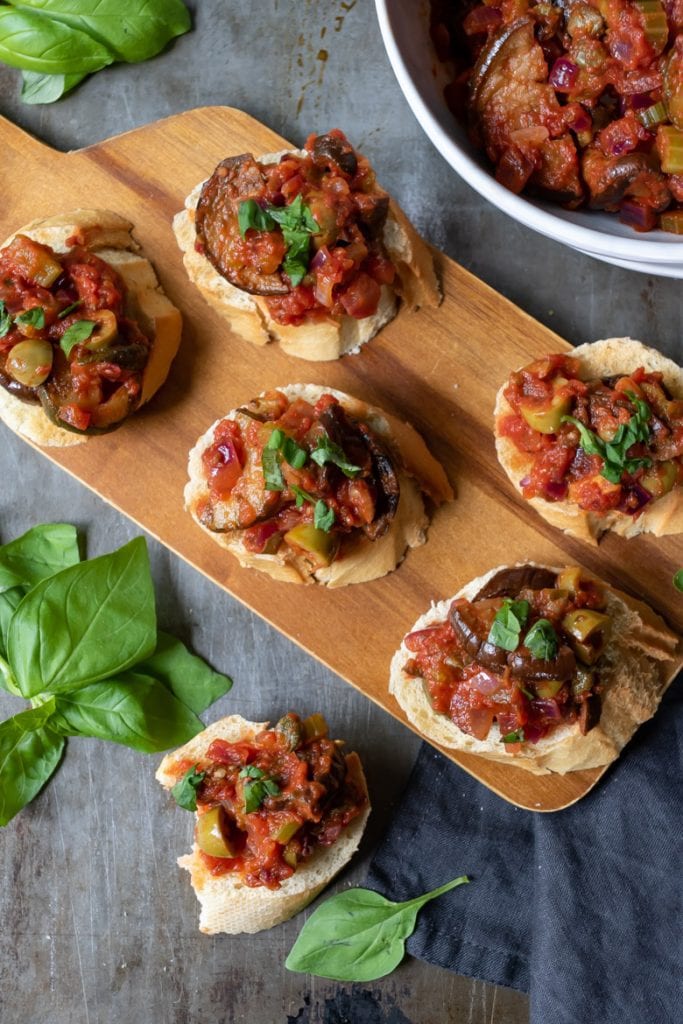 Get the Caponata Siciliana Recipe

Thanks for checking out my recipe! I love hearing from my readers. You all allow me to do what I love and write this UK food blog, sharing vegetarian and vegan recipes, vegetable cake recipes, vegan cake and also easy vegan desserts.
Kate x 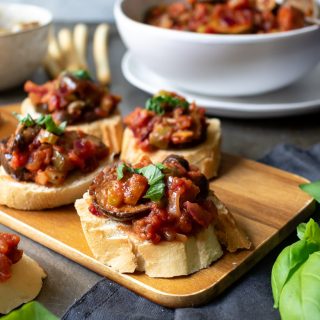 If making bruschetta/crostini don’t add the caponata to the toast until just before serving.