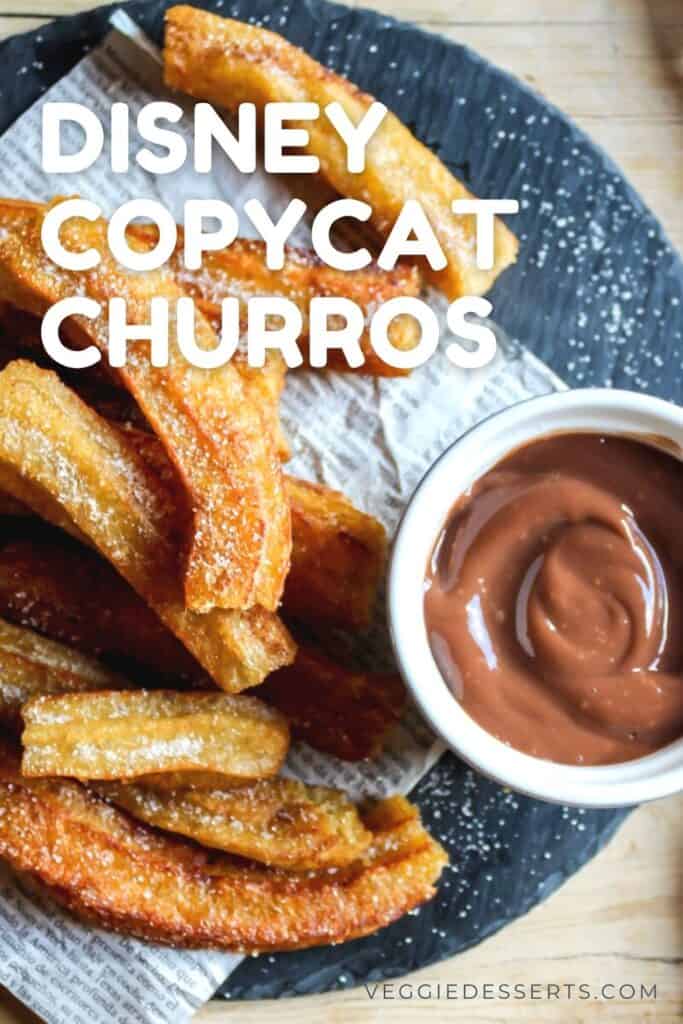 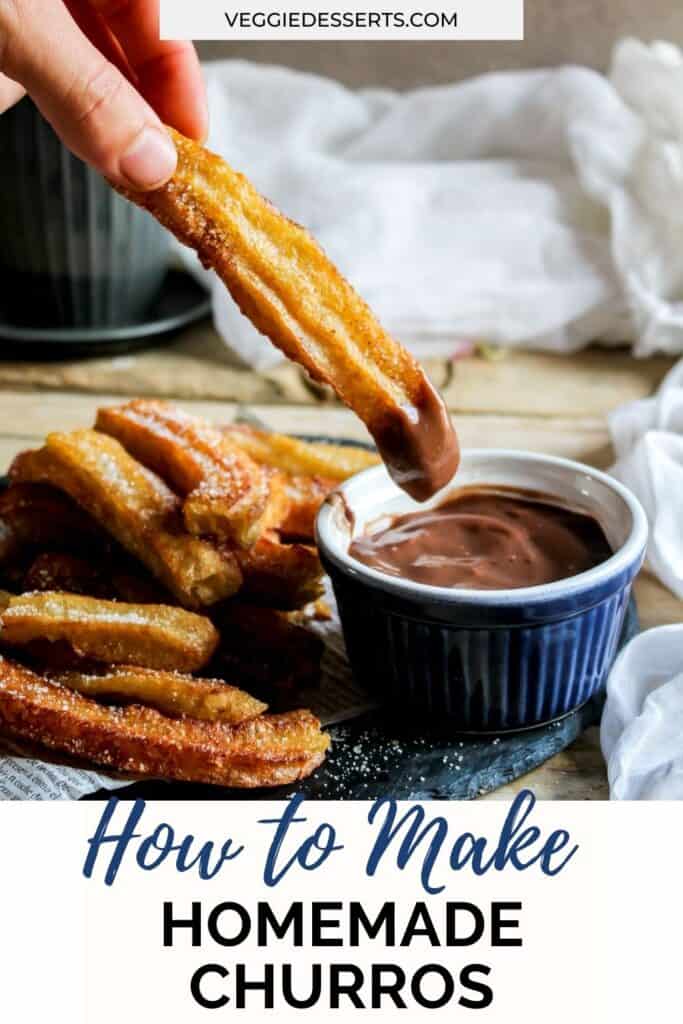 This easy homemade Churros recipe is a great way to get a crunchy and sweet dessert with the warming flavors of cinnamon and sugar. Make churro dough from scratch with simple ingredients and fry them up until they are crispy on the outside and soft on the inside.

If you’ve never had a Mexican churro before, you’re missing out!

You may not be on holiday n Mexico right now, but you can make the wonderful long donuts yourself at home from scratch!

This recipe for homemade churros will not disappoint! It rivals even the best copycat recipes, food truck churro or the ones you can get at Disney.

Wondering how to make churros? It's actually super easy!

You’ll first form a dough by heating water, butter, sugar, and salt, then beat in flour. Eggs and vanilla are beaten in after it cools slightly.

After it’s cooled, transfer it to a piping bag and squeeze long shapes into hot oil that will fry up to perfection.

The cooked long donuts are then dusted in a mix of cinnamon and sugar to make the perfect treat you can’t help but enjoy.

What is a churro?

A churro is a long, slender Spanish, Portuguese, and Mexican deep-fried pastry, that resembles a doughnut or cruller, which is rolled in cinnamon and sugar after frying.

This recipe tastes just like you’ve got one straight from Mexico.

If you've been wondering how to make churros at home, you'll be surprised at just how easy it is!

The dough is made with simple ingredients you can find anywhere.

This cinnamon fried dessert is always a crowd-pleaser.

Even though it’s deep-fried, they are light and satisfying.

You can serve them with your favorite dipping sauces including chocolate sauce, Nutella, or even a fruit compote.

It's Disney churro copycat recipe, and they taste just like they do at Disneyland!

Wondering how to make this churros recipe? Follow this step-by-step photo tutorial, then scroll down to the recipe card for the full ingredients list and method.

Form the churro dough. In a large pot, combine the water, butter, sugar, and salt. Bring to boil, then reduce to low heat. Pour in the flour and beat with a wooden spoon until the churro mixture forms a ball. Set aside to rest for 5 minutes.

Eggs. Add the eggs, one at a time, beating each one in well with the wooden spoon, then beat in the vanilla. Set aside.

Add dough to a piping bag with a large star tip on the end.

Deep fry the churros. As soon as the oil reaches 350 F (175C), you can start to fry your churros, in batches. Pipe strips of dough over the saucepan and cut with a knife or kitchen scissors so they drop into the hot oil. Cook until golden brown on all sides (about 2 minutes). TIP: You'll have to do it in batches so the oil isn't too full of churros.

Coat and serve. Remove the cooked churros with metal tongs or a metal slotted spoon and leave to drain on a plate lined with kitchen paper. While still warm, roll them in the sugar mixed with cinnamon.

It is essential to cool the churro batter so the egg doesn’t scramble if added to hot churro dough.

Use a knife or kitchen scissors to cut the strips of churro mix, carefully, into the hot oil.

The time it takes to fry them is largely dependent on how they look in the oil. As soon as they are golden brown, it’s time to take them out! This can take anywhere from 2-4 minutes, so always use your best judgment.

To make sure you get it perfect every time, you may want to purchase a candy thermometer so you can monitor the oil properly.

Don’t coat the homemade churros in cinnamon and sugar until they have cooled slightly. If your churro is still a bit oily before coating, it may not stick! Don't let them cool either, though.

There are so many ways you can add flavor to churros by serving them with a variety of dipping sauce options. Try these out!

Storing: These churros are best served warm and should be eaten right away!

Freezing: After cooking, they do not hold up well in the freezer, therefore freezing is not recommended.

Are churros served hot or cold?

Churros are best served while they are warm just after they have been coated. Cold ones will not have as crunchy of an outside.

Why are my churros raw on the inside?

This could mean that your oil may be too hot. The outside may be cooking too fast. Use a candy thermometer for best results.

Churros originated in Spain (in Madrid), though the method of frying the dough was invented in China.  They're very popular as Mexican street food, or served at fairs and markets around North America, Australia, and the UK, among other countries.

Where are churros from?

Churros originated in Spain. Although commonly thought of as Mexican, they are a Spanish dish, often served at breakfast with hot chocolate.

If you're making this homemade churros recipe for a Mexican-themed party, Cinco de Mayo or other event, be sure to try these other Mexican inspired recipes too!

Cinnamon is for life, not just for winter! Be sure to try these other tasty cinnamon recipes.

GET YOUR FREE COOKBOOK!

Download the free
15-Minute Dinners e-book, full of quick, easy and tasty vegan recipes! You’ll also be added to our mailing list to get new recipes via email. 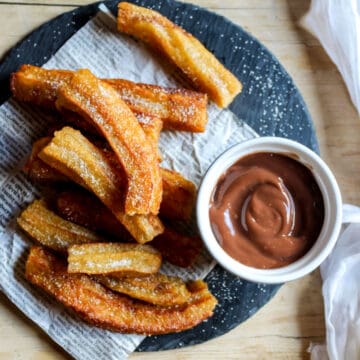 It is essential to cool the dough so the egg doesn’t scramble if added to hot churro dough. The time it takes to fry churros is largely dependent on how they look in the oil. As soon as they are golden brown, it’s time to take them out! This can take anywhere from 2-4 minutes, so always use your best judgment. To make sure you get it perfect every time, you may want to purchase a candy thermometer so you can monitor the oil properly.  Don’t coat the churros in cinnamon and sugar until they have cooled slightly. If your churro is still a bit oily before coating, it may not stick!