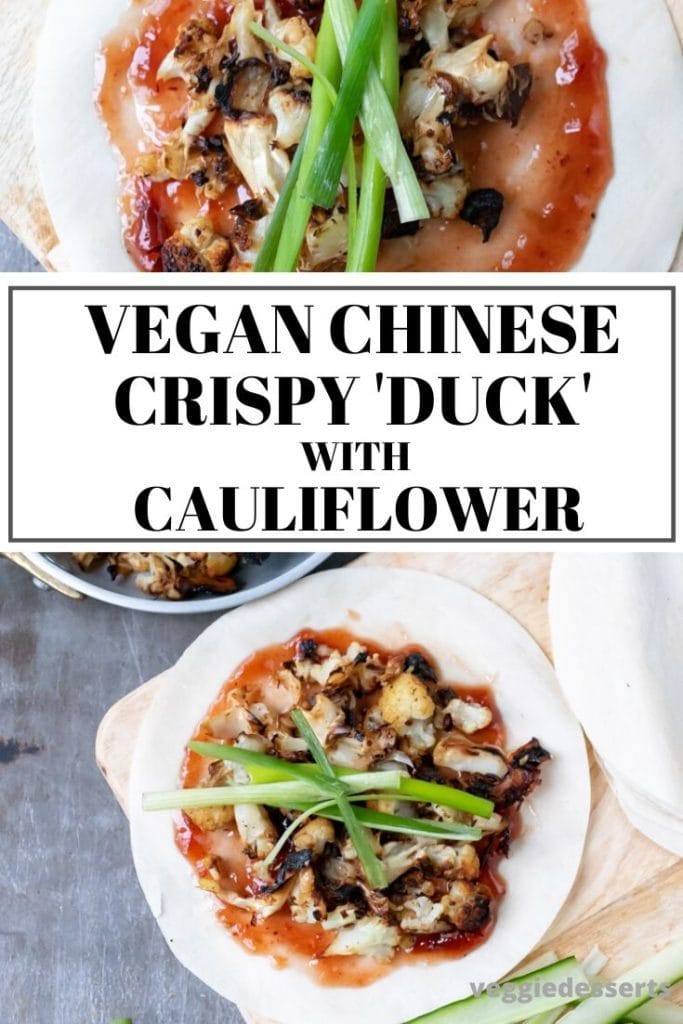 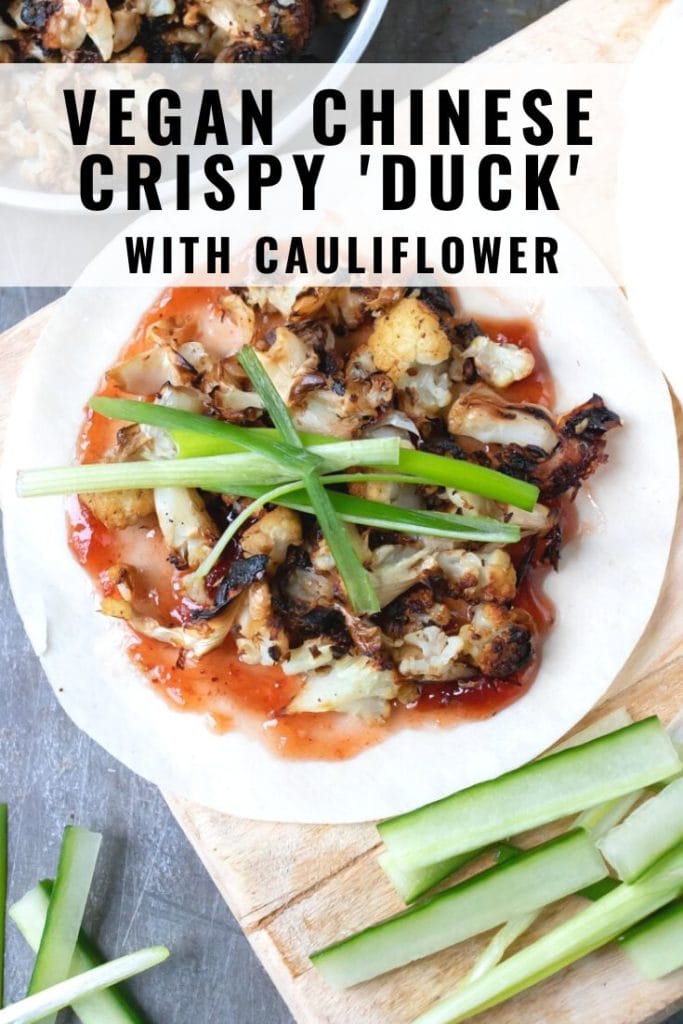 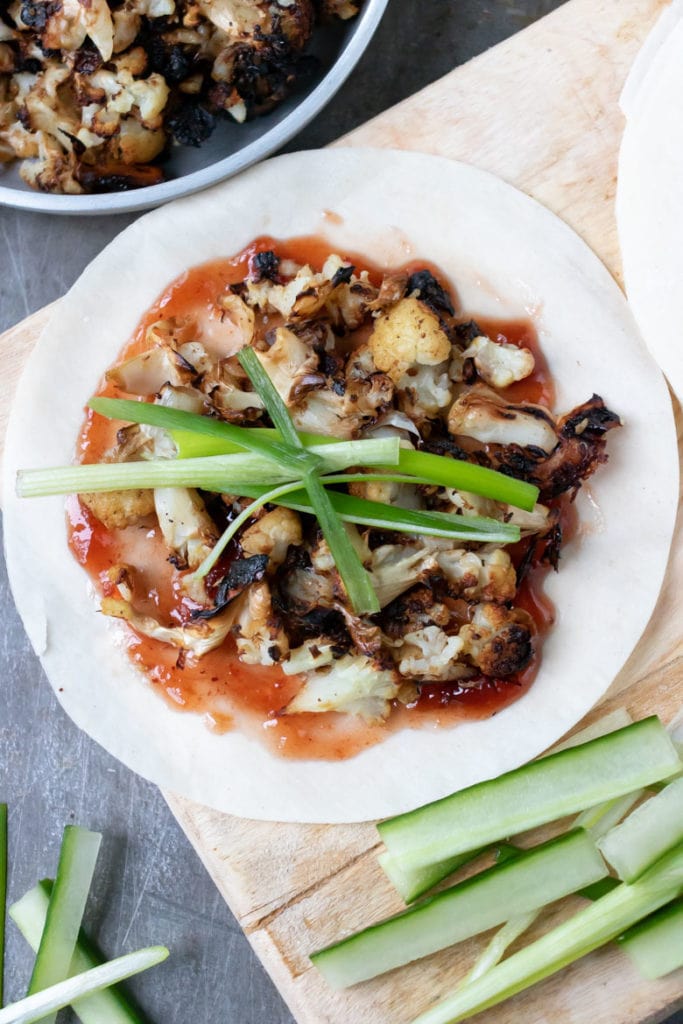 Here's a vegan version of Chinese crispy duck - with five-spice seasoned, slow-roasted cauliflower instead of meat!

Shredding the cauliflower and then re-roasting it makes it soft yet crispy - perfect for topping homemade Chinese pancakes.

While the marinated cauliflower is roasting in the oven, it's easy to make a tangy, spiced plum sauce. Just cook it all until soft and puree with a hand blender and you have a delicious sauce miles better than store-bought.

It's also very quick and easy to make the pancakes.

They're simply flour and boiling water mixed into a dough, rolled and pan-fried for 30 seconds on each side.

The warm pancakes are amazing topped with the plum sauce and vegan crispy duck (cauliflower) and some fresh spring onion and cucumber matchsticks.

If you love vegan Chinese dishes, be sure to also try my pan-fried Asian Tofu with Sticky Garlic Sauce.

This post was originally published Sept 2017. Updated Jan 2020 with new photos and information. The recipe remains the same. 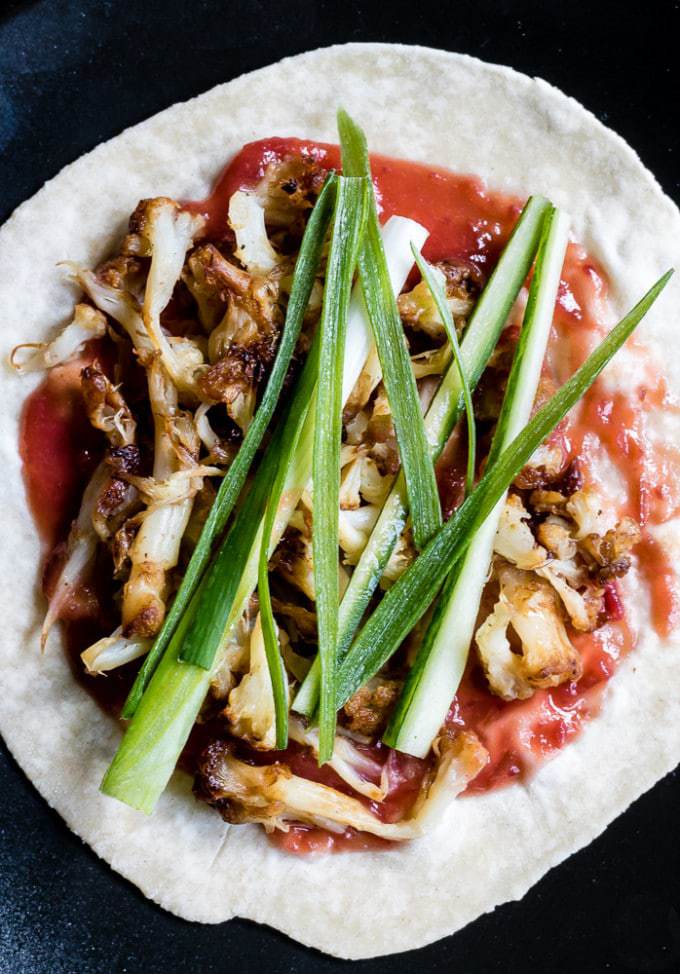 For this vegan Chinese recipe, you just need these simple ingredients.

For the homemade Chinese pancakes:
You can buy your own in many supermarkets or Chinese supermarkets, but they're actually really easy to make!
Flour
Water
Oil (olive, canola, sunflower etc..) 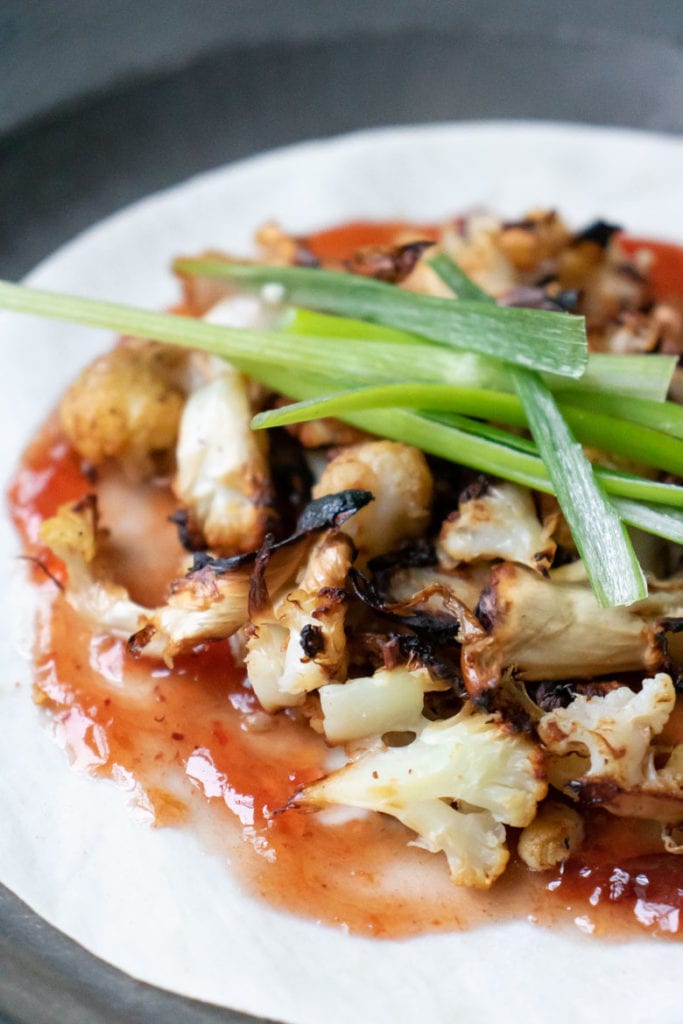 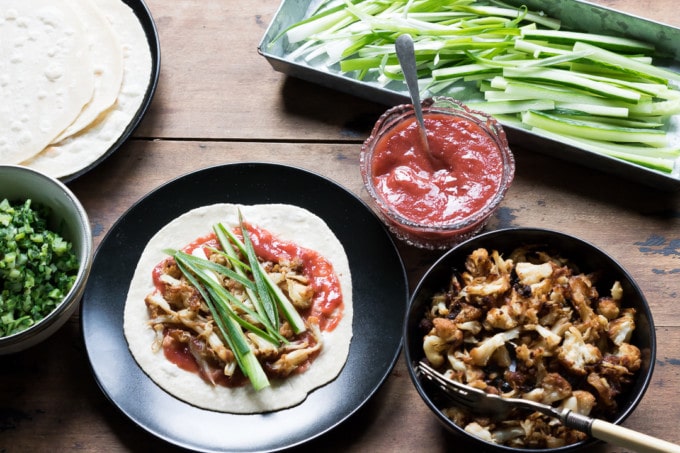 Although my husband and kids aren't veggie, we tend to eat a lot of vegan meals at home.

Getting as many vegetables into a meal as I can is important to me, and I really enjoy creating veg-filled veganized dishes that the whole family love.

My husband has often had crispy duck from the local Chinese takeout, but he said that he preferred my cauliflower version as it tastes very similar but wasn't fatty or greasy.

In fact, he put this recipe into our regular meal plan rotation.

Check out these other tasty vegan dinner recipes: 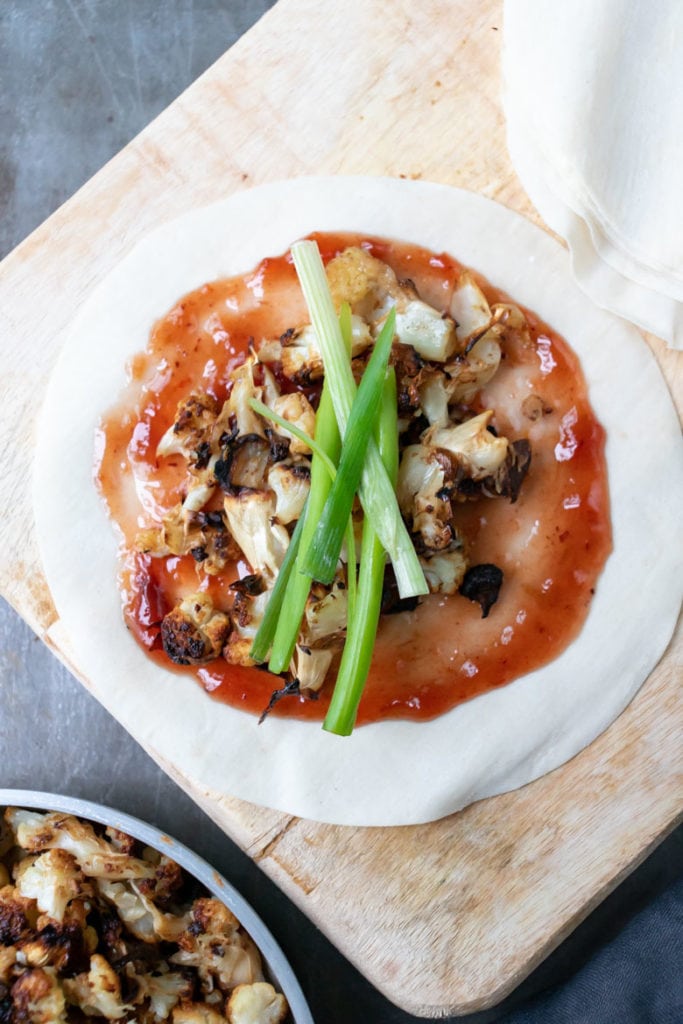 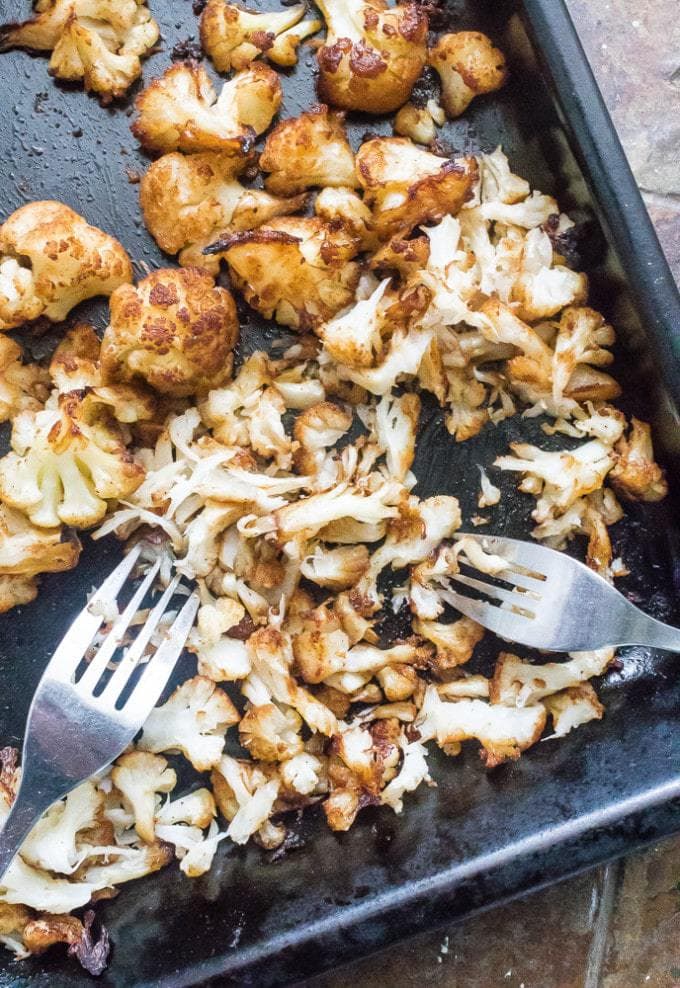 By using cauliflower, you still have the texture that you'd expect from crispy duck, but without all the grease or it being, well, meat.

Shredding the soft roasted cauliflower and then re-roasting it means it gets extra crispy on all those exposed edges. Delicious!

The stalk works great for shredding, so be sure to use it as well.

I marinaded the cauliflower in typical crispy duck seasonings of maple syrup (traditionally honey is used by it isn't vegan) and Chinese five-spice.

You can easily find it premixed in the spice aisle. I adore the way it's at once sweet and savoury. In fact, I used it in a carrot cake! Try my Carrot Chinese Five Spice Cake with Orange Icing. 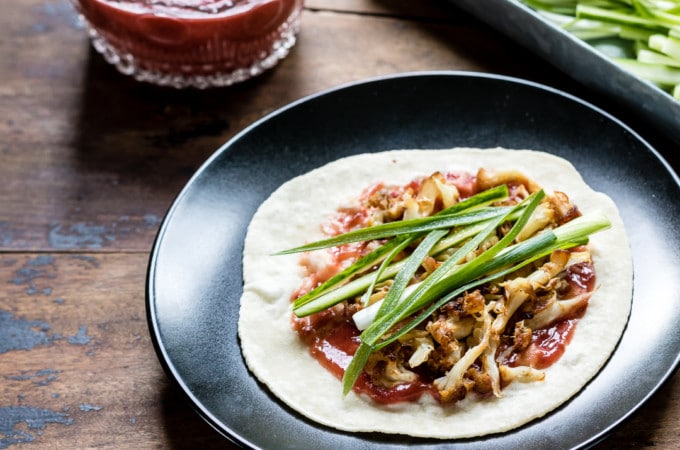 Get the recipe for Vegan Cauliflower Crispy 'Duck'

If you make this recipe, please tag it with #veggiedesserts on Instagram or other social media. I LOVE seeing your recreations of my recipes! 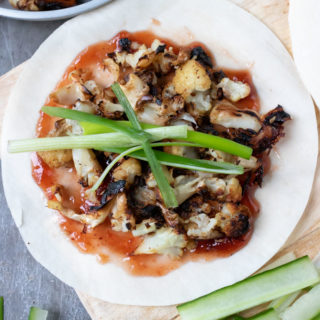 For the vegan cauliflower crispy 'duck'

For the plum sauce