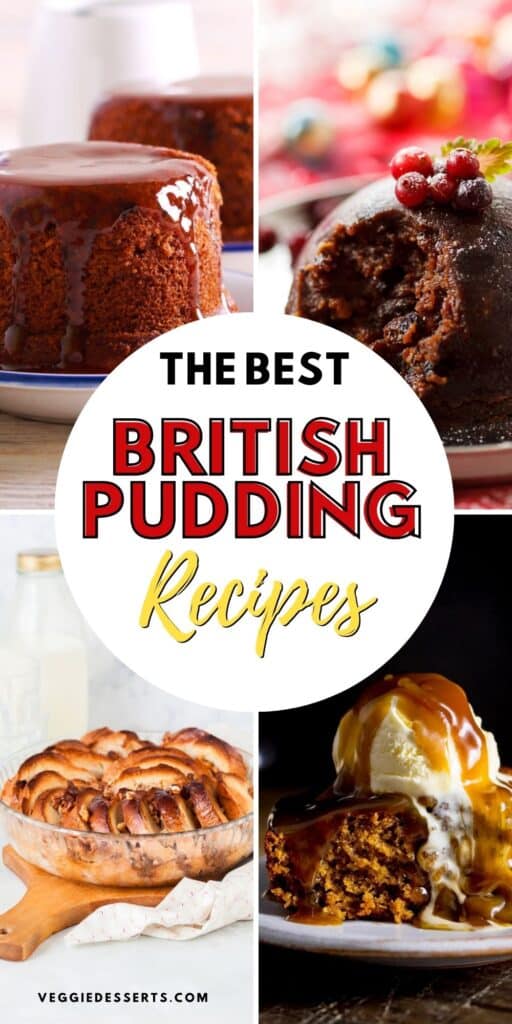 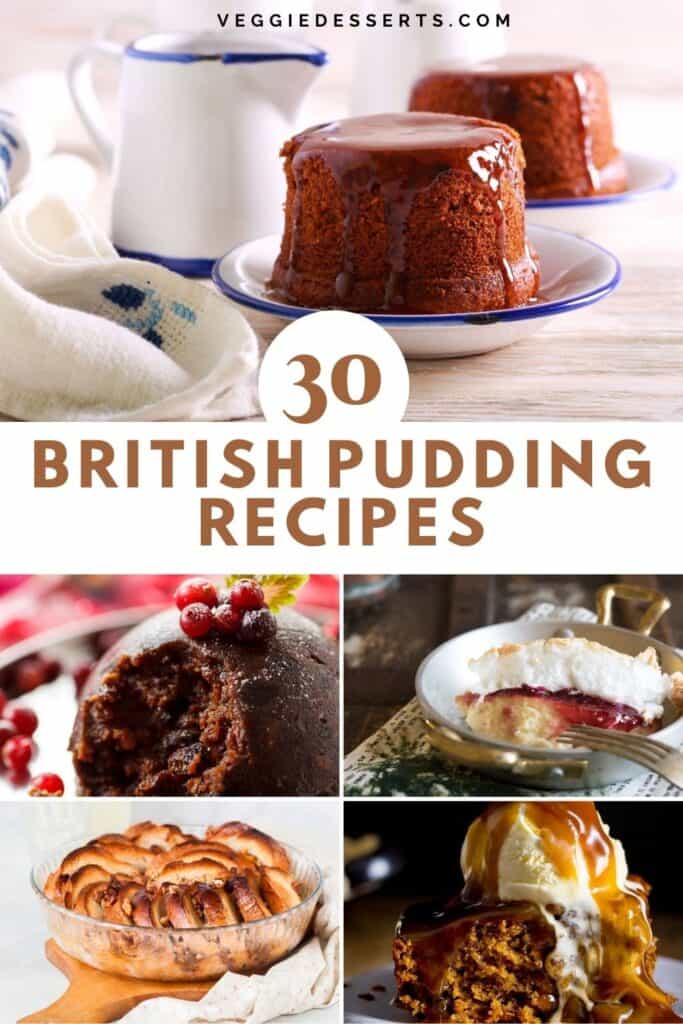 There are so many different types of traditional British pudding and there isn't exactly a firm rule about what constitutes a 'pudding'.

It gets even more confusing because in Britain, the word pudding is often used to mean dessert.

But I'm going to focus on traditional British puddings.

I've gathered the best ones together, from old school classics such as Summer Pudding to trifles, crumbles, and the interestingly named Spotted Dick.

You'll love these English puddings, many of which are specific to different regions.

But first, let's clarify. What is pudding?

In the United States, a pudding is a flavored creamy, cold, set dessert, similar to custard.

In Britain, pudding is often used as another word for dessert, to mean any sweet course after a savory meal.

However, there is also a category of desserts called pudding.

Traditional British puddings are usually steamed, baked or boiled desserts, such as Christmas Pudding, Spotted Dick, or Summer Pudding. They're a bit like cake that is steamed so they're very moist, take the shape of the bowl or basin they are cooked in and have a 'close' texture - very unlike traditional fluffy cake.

Part of the texture also comes from the wide use of suet in puddings. It's a type of grated hard beef fat, but vegetarian versions are widely available and often used instead.

Puddings can also include cold desserts, such as trifle, or baked topped fruit, such as apple crumble, as well as rice pudding and bread and butter pudding.

Puddings can also refer to savory dishes (such as black pudding, Yorkshire pudding and pease pudding), but for this post, we're sticking to sweet.

There isn't a firm rule about what constitutes an English pudding! My kids tend to call it 'tasty hot slop in a bowl'!

What is the dictionary definition of a British or English pudding? "A baked or steamed sponge or suet dish, usually sweet and served as a dessert, but also savoury suet puddings (e.g. steak and kidney). Also milk puddings, made by baking rice, semolina, or sago in milk." - Bender & Bender, A Dictionary of Food and Nutrition.

2022 marks Queen Elizabeth's 70 years on the throne. To celebrate, there is a year of Platinum Jubilee events, including the Platinum Pudding Competition.

Fortnum & Mason, the upmarket London England department store founded in 1707, is asking anyone over the age of 8 to submit a pudding recipe fit for the Queen, but 4 February.

The winner, judged by celebrity chefs including Dame Mary Berry, will be served to Her Majesty as part of the Platinum Jubilee celebrations!

Is your creation good enough? The proof is in the pudding! (sorry, groan).

Puddings can be broken down into a few basic categories: steamed or boiled puddings, bread puddings and jellies + milk puddings.

Steamed or boiled puddings are usually cooked in a basin/bowl or elaborate fluted basin. The moist puddings then take the shape of the dish it's baked in.

Sticky Toffee Pudding is a date and caramel cake that lives up to its sticky name. The rich cake is traditionally steamed but often baked instead.

Jam Roly Poly is an old-school classic that's similar to Swiss roll. A large suet-rich thin cake is spread with jam and rolled up into a swirl.

Spotted Dick is a bizarrely-named steamed suet cake full of currants/raisins. It's usually served warm with lashings of hot custard.

Traditional puddings are often made of leftover or stale bread, usually with a sauce or custard.

Bread and Butter Pudding has slices or cubes of bread baked in custard, often flavored with spices or dried fruit.

Summer Pudding consists of slices of bread around the edge of a pudding basin/bowl. It's then filled with fruit, which seeps through the bread giving it a vibrant color and fruity taste.

Other examples include Bread Pudding, Queen of Puddings (which has a breadcrumb custard), and Apple Charlotte.

From trifles to rice pudding, there are plenty of desserts that are gelatine and/or milk-based.

Rice pudding is a milky dish of sweet baked rice. It can have add-ins such as vanilla, raisins or spices. It's served on its own or with custard or fruit compote.

Eton Mess is one of the cold puddings. It's made of crumbled meringues in a glass with fruit and whipped cream.

Other examples include Blancmange, Syllabub, Fruit Fools, and Possett.

I hope you'll try them out. Let me know how you get on with them in the comments. Queen of Puddings is a traditional British dessert that consists of a baked, breadcrumb-thickened custard topped with raspberry jam and a crown of fluffy meringue. 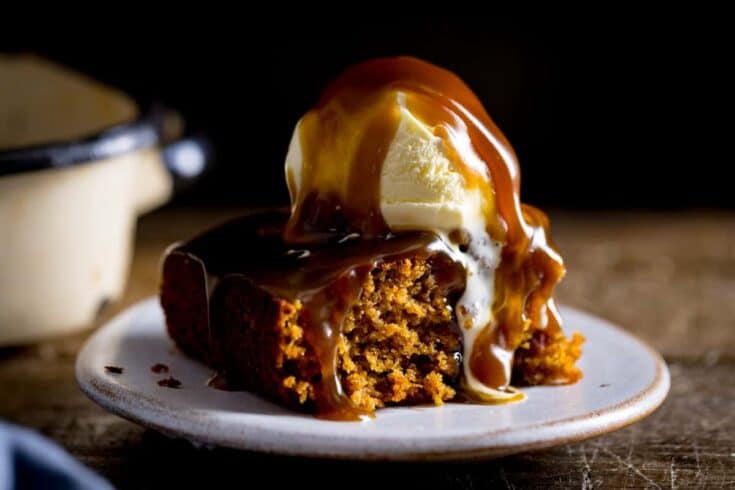 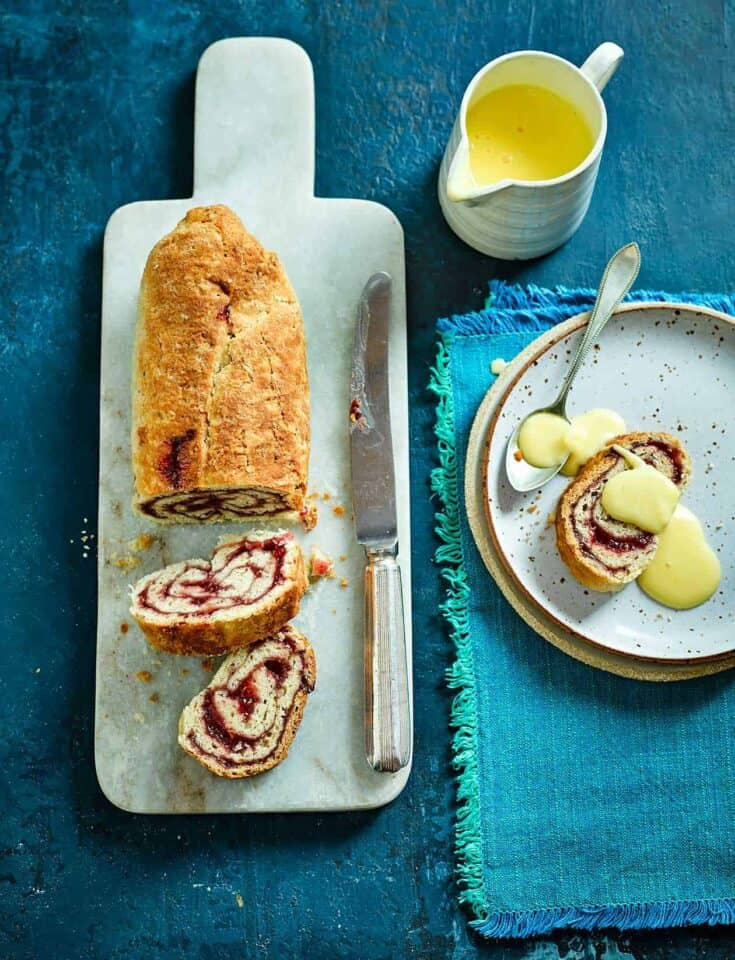 Jam Roly Poly is an old-school classic pudding. It's made of a thin suet pastry, filled with jam, rolled up, and steamed. Perfect drizzled with warm custard. A quintessential British pudding. It's custardy on the inside, and golden and buttery on the surface!. Perfect served warm with a scoop of ice cream. 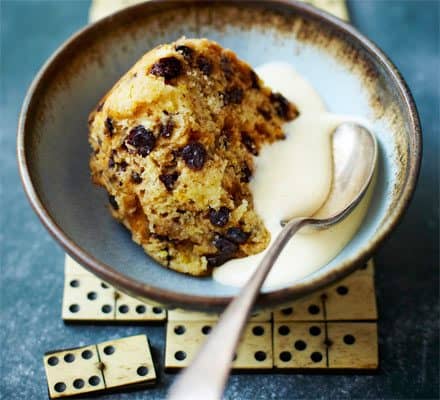 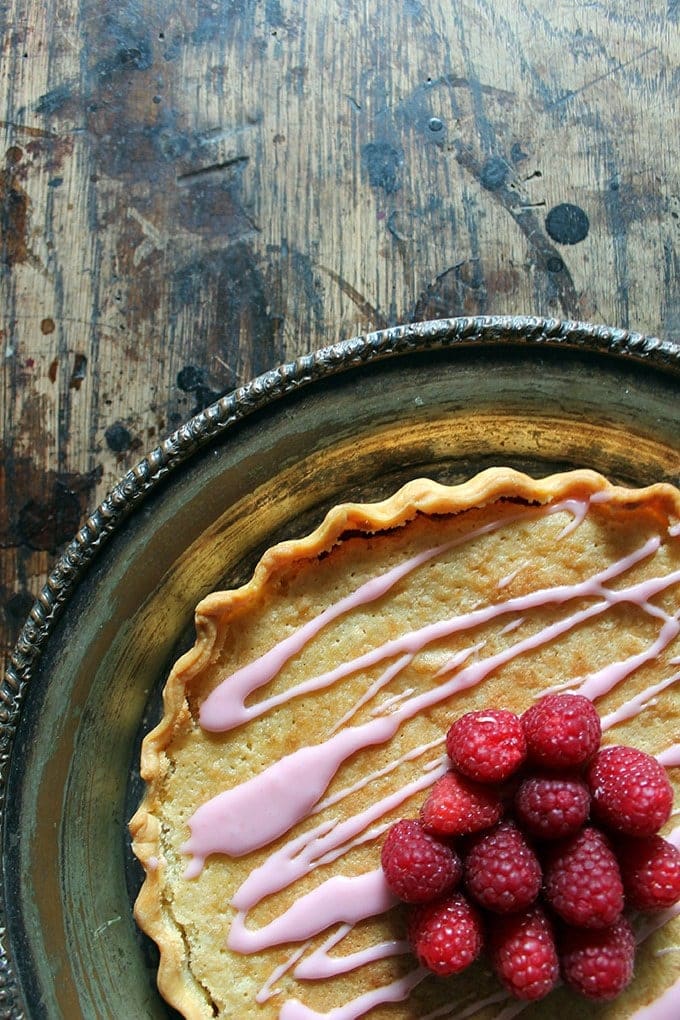 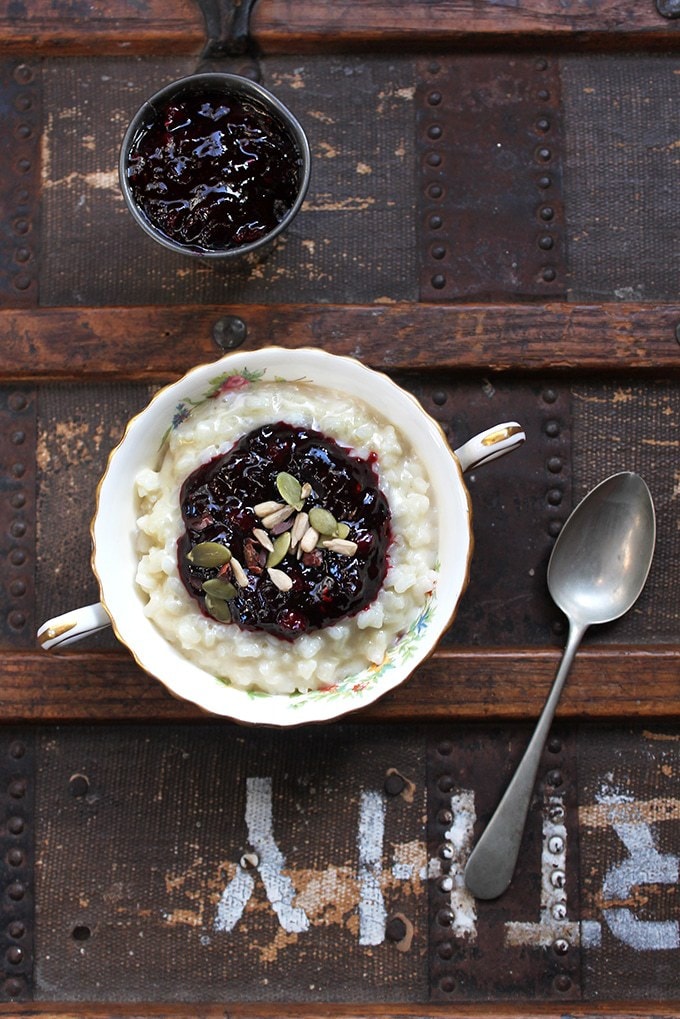 This vegan version of the classic Rice Pudding is comfort food at its finest. The milky dish of soft rice is delicious. Serve with custard or fruit compote. 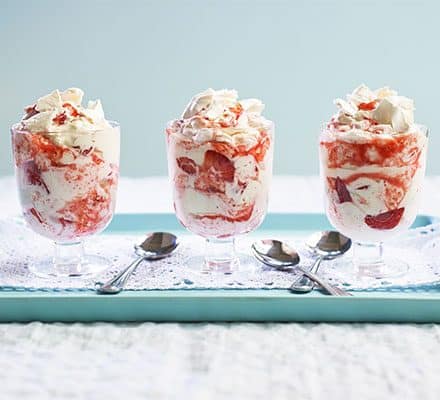 Eton Mess is a summery classic, with layers of crushed meringue, fluffy whipped cream, and fruit, all served in a glass. Sussex pond pudding is a traditional English pudding from the southern county of Sussex. The pudding is made of a suet pastry with butter and sugar, and a whole lemon inside, that is boiled or steamed. 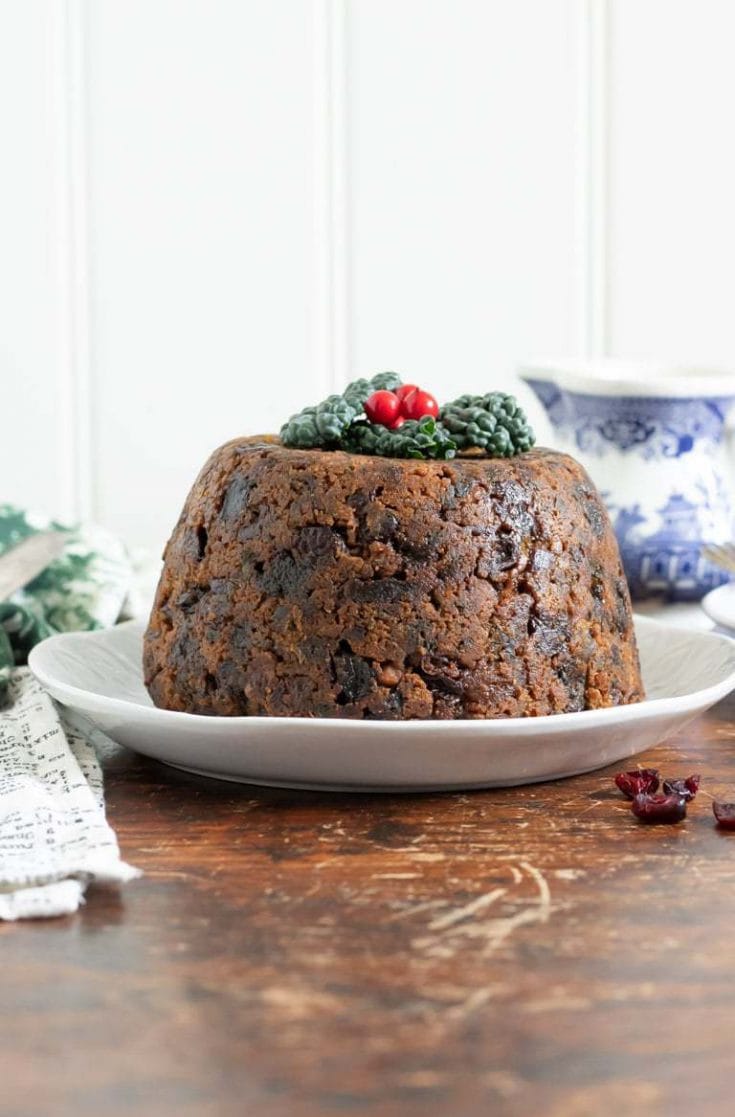 This is my twist on the classic Christmas Pudding (aka figgy pudding or plum pudding). It's a traditional steamed pudding, full of dried fruit. 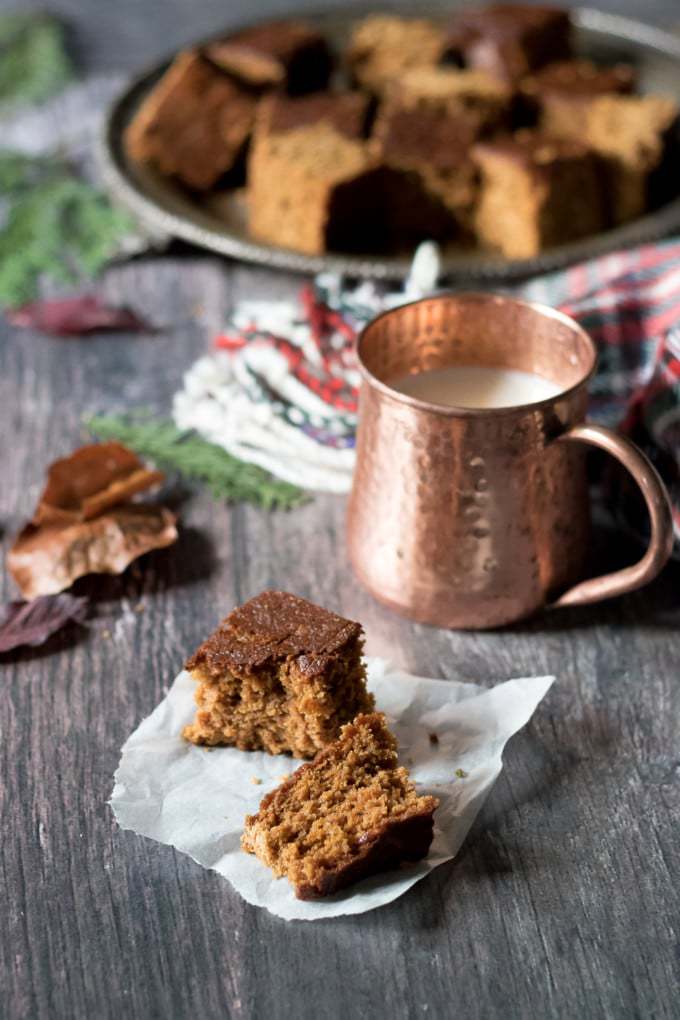 Yorkshire Parkin is a sticky oat ginger cake with a lovely dense texture. It's best if left for a few days before serving, so it gets extra sticky. 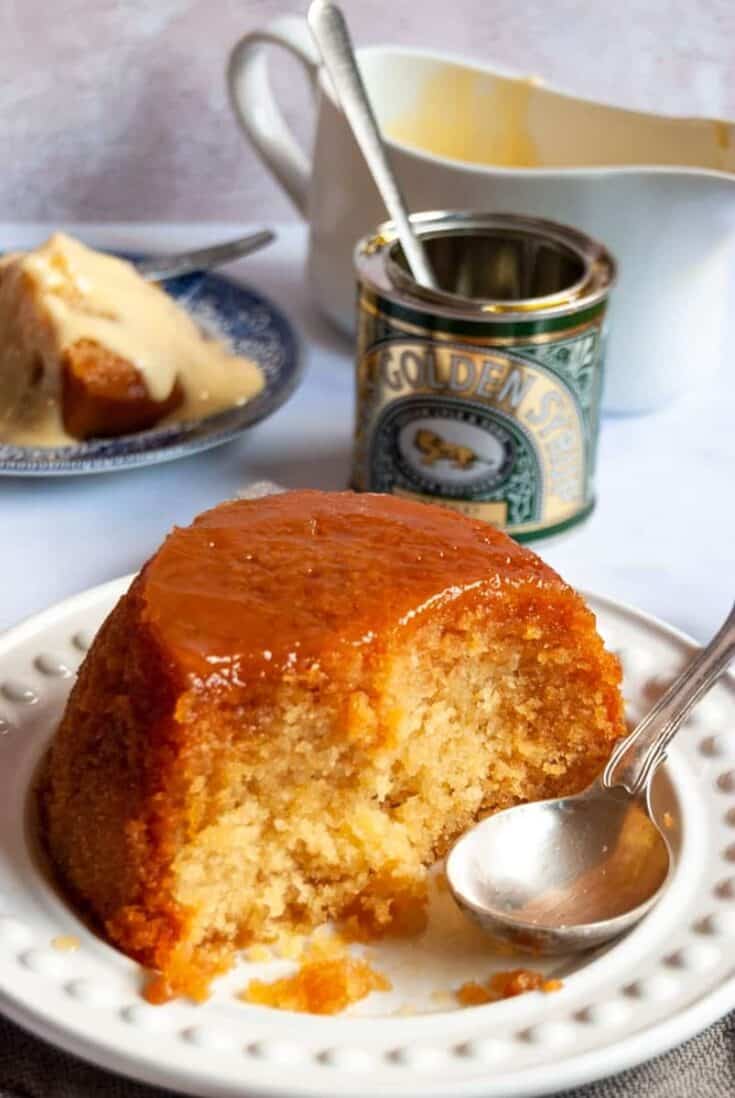 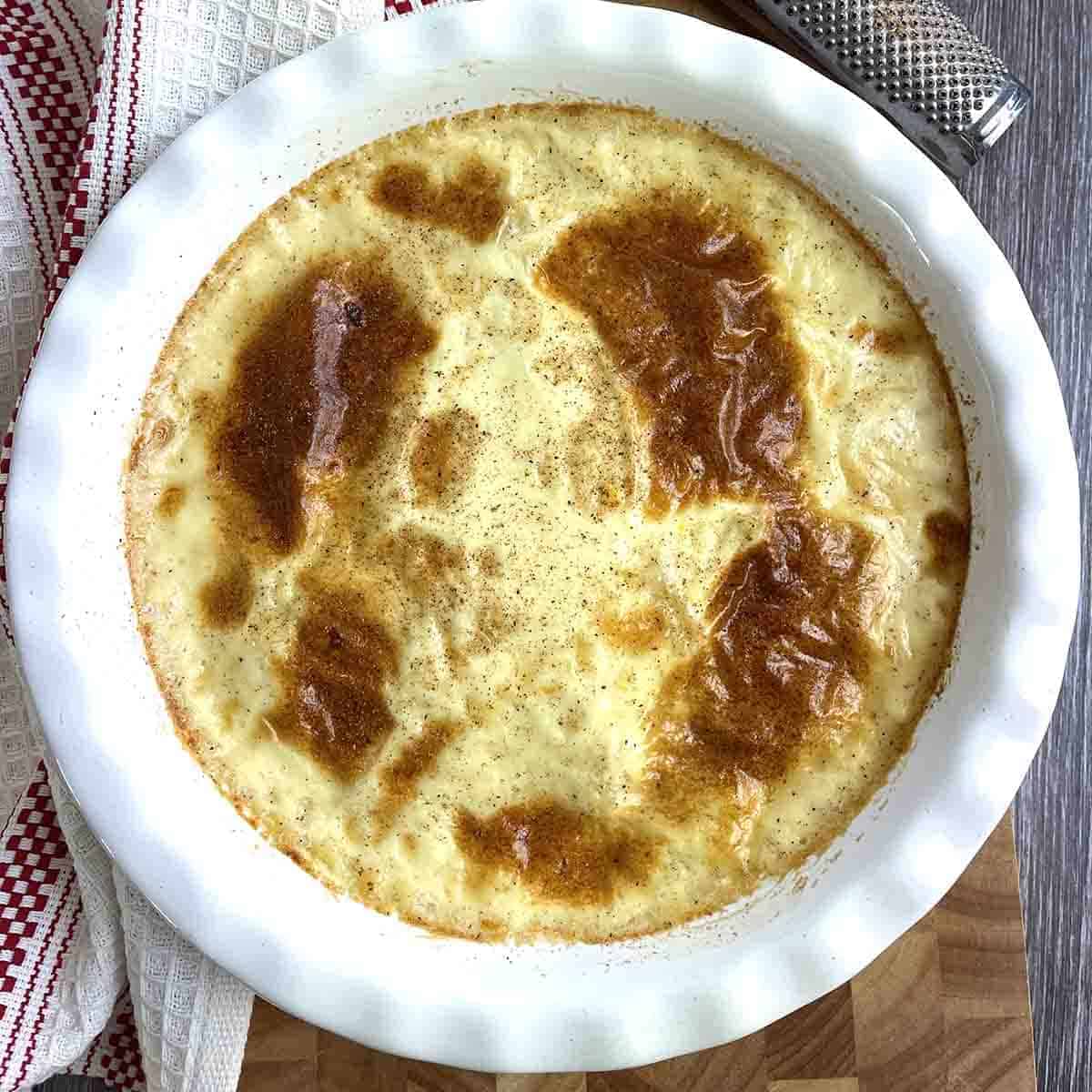 A classic old fashioned British baked custard pudding with macaroni. This frugal dessert dates back to the 1800s. 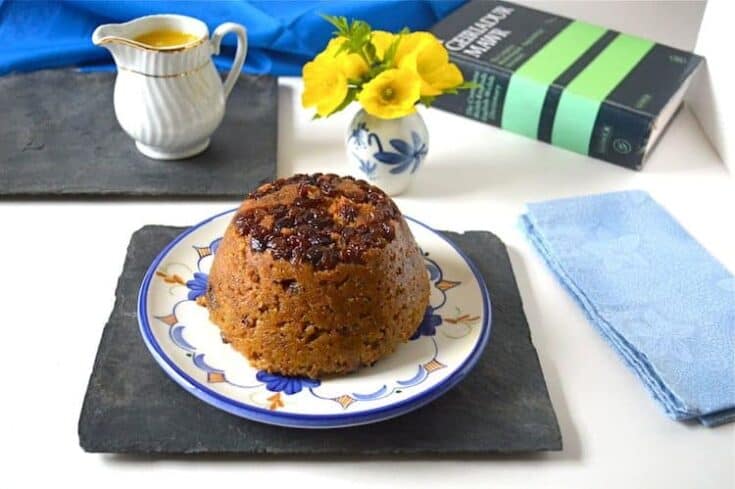 Snowdon Pudding is an old-fashioned steamed suet pudding from North Wales, that is flavored with lemon zest and marmalade. 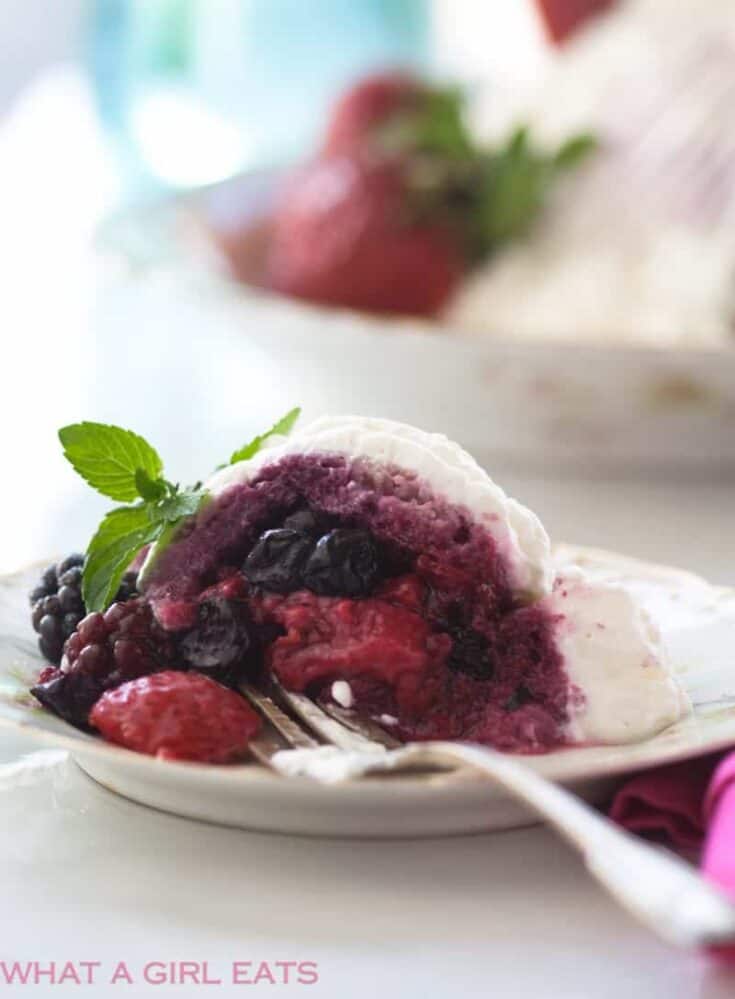 This beautiful summer pudding is a classic and delicious berry-filled dessert made in a bowl lined with slices of bread. Christmas pudding is a sticky, moist and dense sponge cake, similar to fruitcake. It's a mix of dried fruit, candied fruit peel, apple, and citrus zests, and it's soaked in brandy or other alcohol. 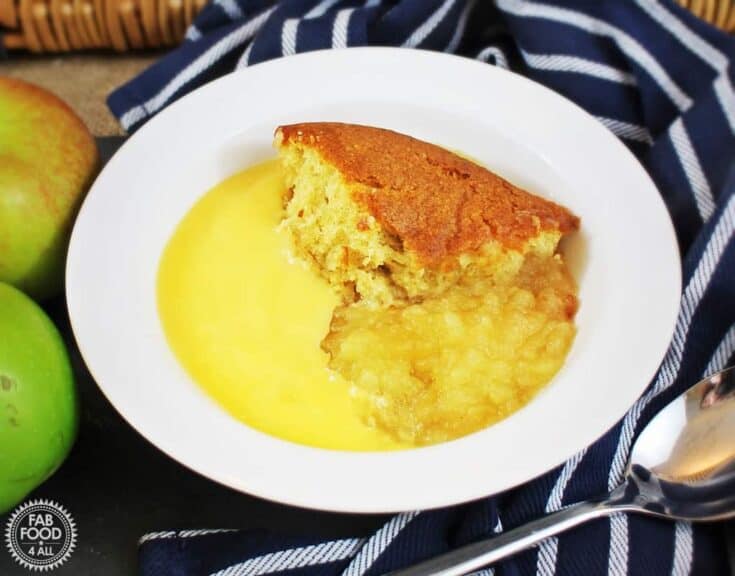 Eve’s Pudding is a British classic made of layers of stewed apples, topped with vanilla sponge cake. It's the ultimate comfort food. Serve with custard or vanilla ice cream! Banoffee pie was first created in England in 1971. It has now become a firm favorite all over the British Isles, and beyond. IBanoffee pie has a biscuit or cookie crumb crust, filled with caramel and sliced bananas, then opped with freshly whipped cream. 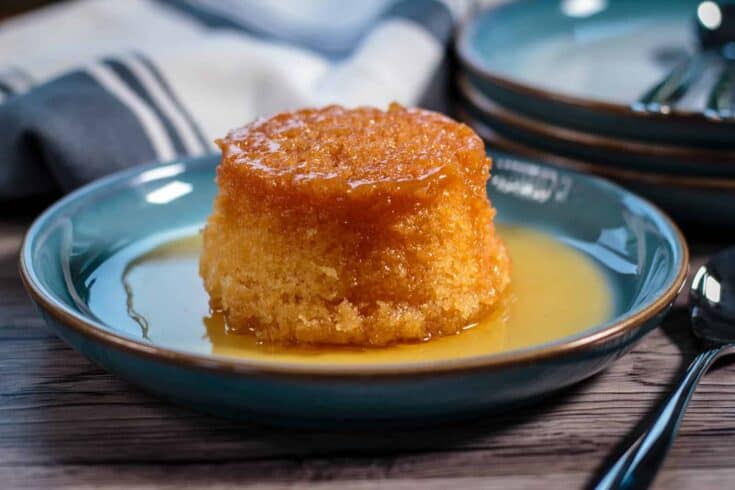 You'll love this British dessert of Treacle Sponge, made in the slow cooker. Soft sponge cake with a treacle sauce. 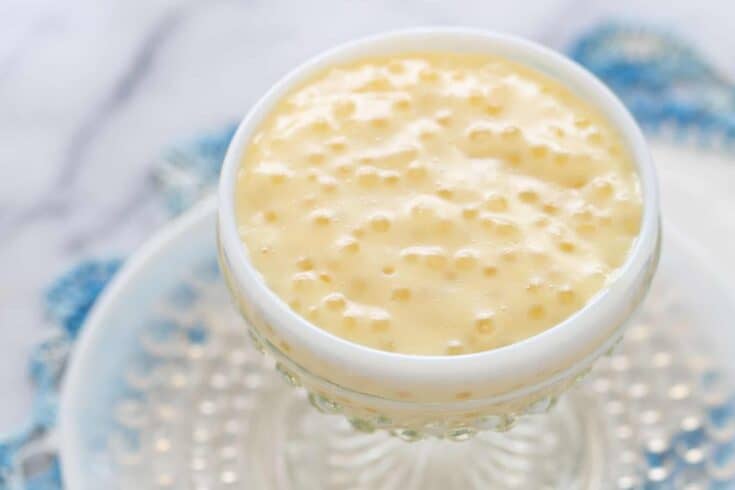 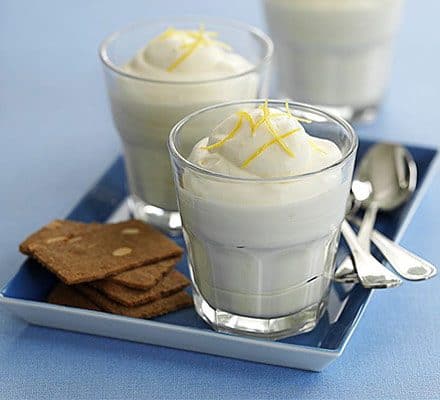 Syllabub is an Old English dessert made with whipped cream, sherry, white wine or other alcohol, plus sugar and citrus (lemon or other citrus). 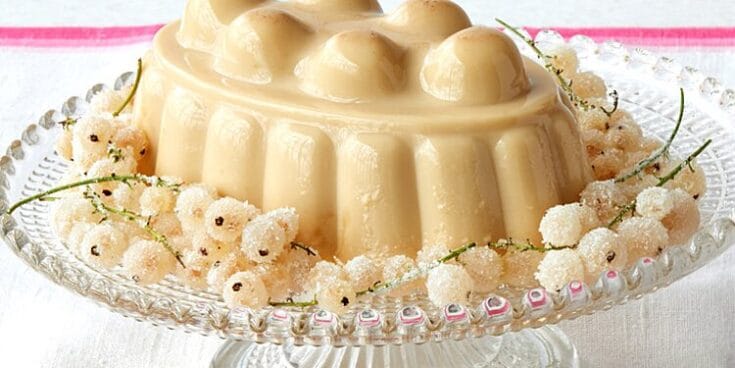 Like a large pannacotta, Blancmange is a comforting, milky gelatin pudding. You'll love the saucy middle of this melt-in-the-middle Chocolate Pudding. Plus, it's quick and easy to prepare. Steam the pudding in your slow cooker or a pot on the stovetop, and serve with chocolate sauce. 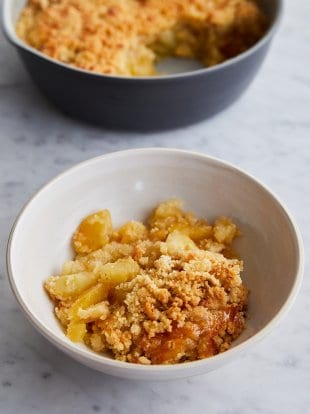 Make this classic apple crumble, then serve with custard or ice cream! 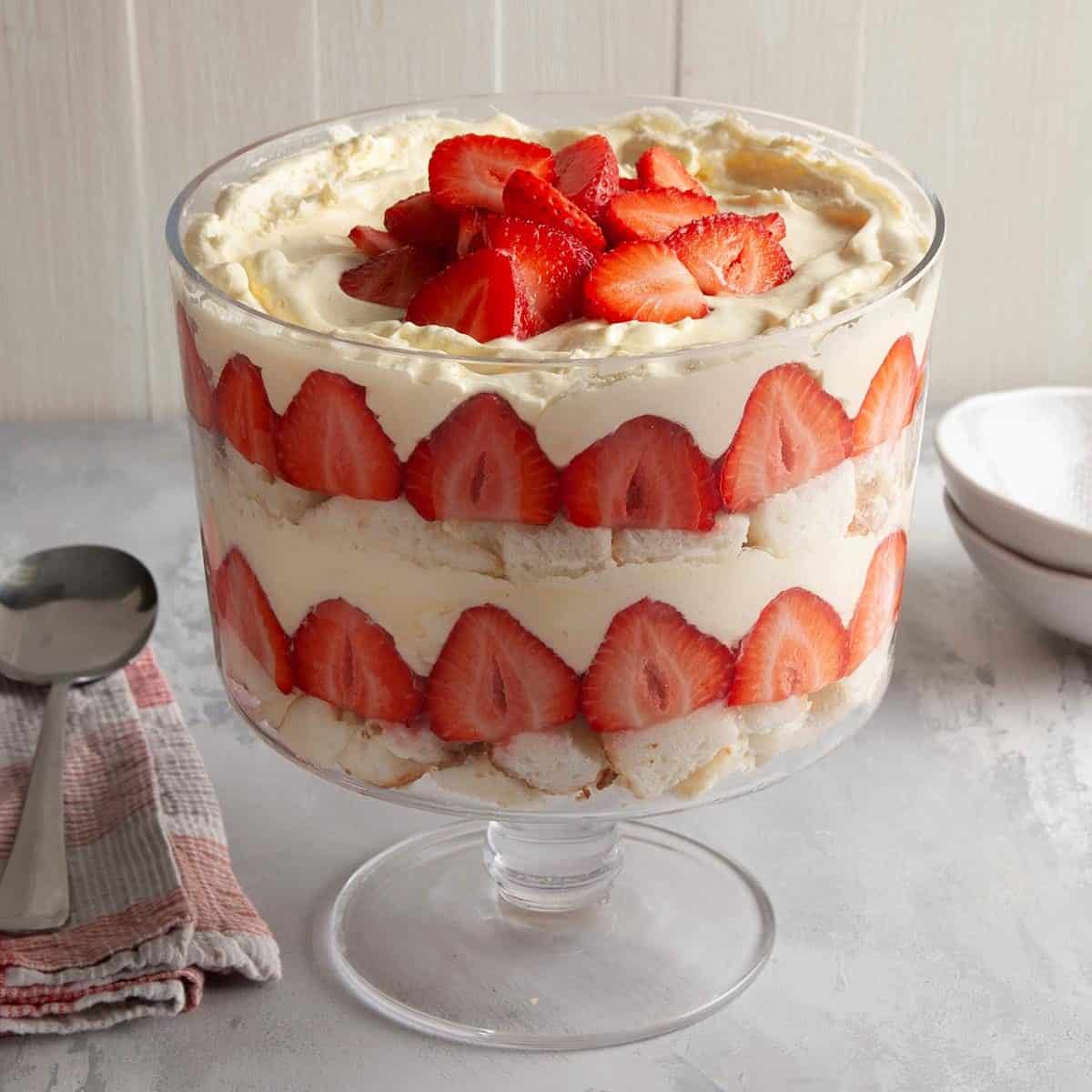 When it cooks, the batter of this dish separates into a sponge cake with its own zesty lemon sauce! 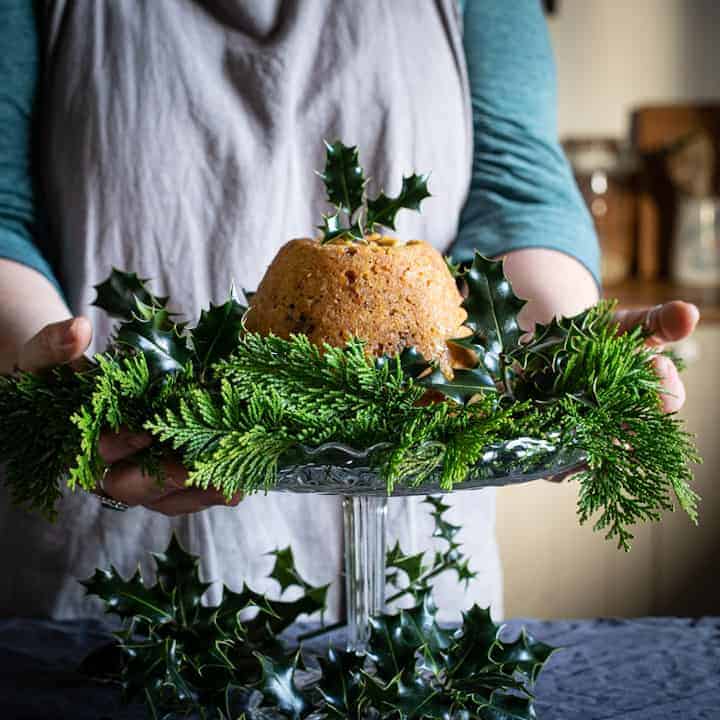 Make this traditional figgy pudding! It's a steamed pudding with suet, figs and warming spices. 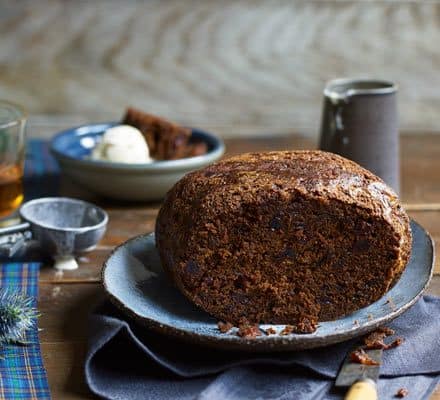 Clootie Dumpling is a traditional steamed Scottish pudding. It's made with dried fruit and warming spices. It's popular on Burns night and served with custard or ice cream. 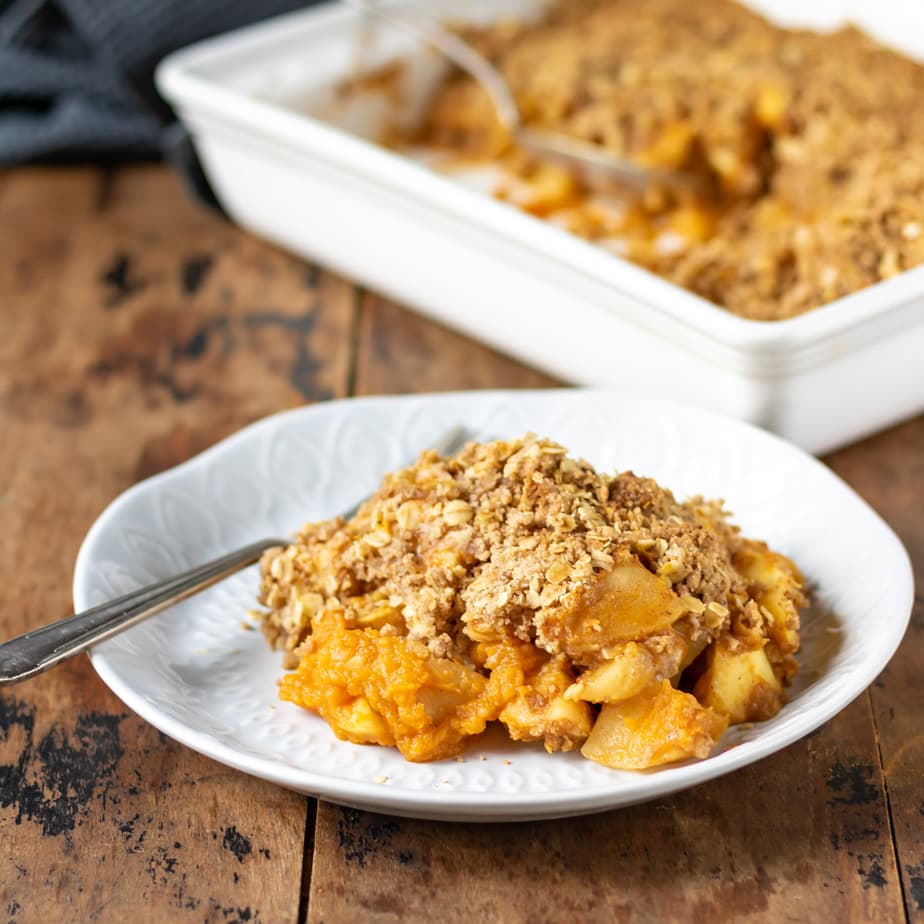 Serve this dish of pumpkin and apples baked under an oaty spiced crumble topping.