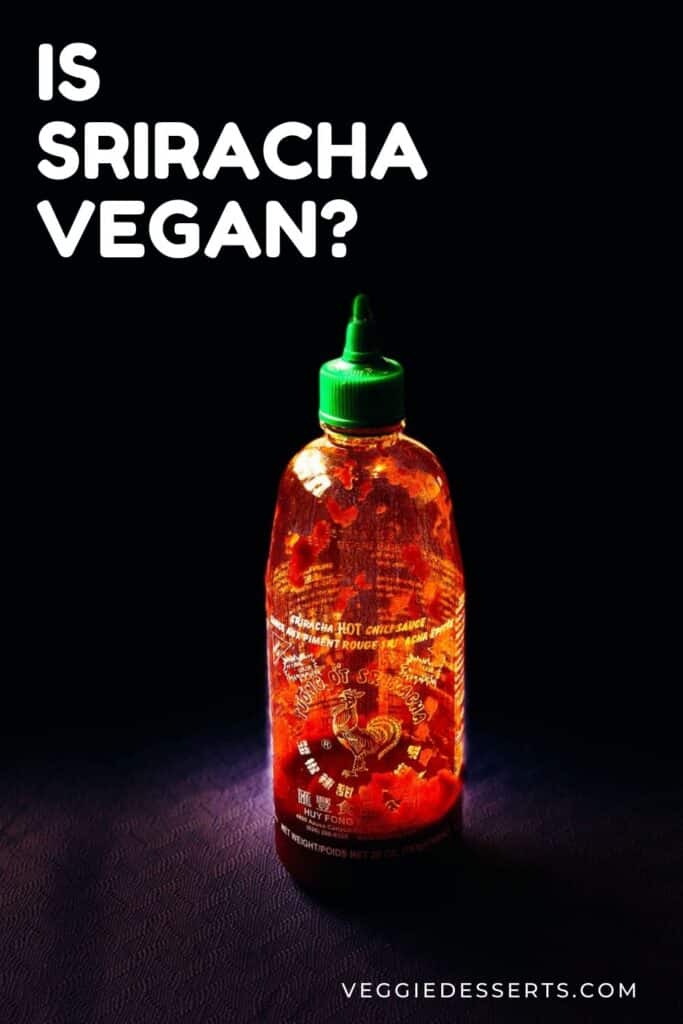 Is Sriracha sauce vegan? Sriracha makes an awesome condiment for everything from fries and burgers to Bahn mi and tacos. But, can you eat it on a vegan diet? Let's explore the iconic hot sauce...

Sriracha is a very popular hot sauce condiment that adds a rich spice to stir-fries, soups, noodles, roasted veggies, and any dish that would benefit from a kick of spice!

Made from chili, vinegar, sugar, salt and garlic, this hot sauce has gained a cult following.

But you might be wondering if sriracha is vegan? Luckily for all you vegan hot sauce lovers, most srirachas are safe for vegans.

Read on to find out which sriracha sauces are vegan.

You'll know this sauce from the iconic bottle.

The simple design graces homes, restaurants, and grocery stores all over the world.

In fact, it's such a hugely popular trend food that you can buy mini keychain bottles and even a huge range of clothing with the bottle emblazoned on them. That's a lot of love for a hot sauce.

But what exactly is it?

What is sriracha sauce?

Sriracha is a moderately spicy Thai hot sauce made from a paste of chili peppers, distilled vinegar, garlic, sugar, and salt.

Use it as a condiment to add a rich, bold spice to many dishes. Try it in Sriracha Aioli!

The history of sriracha

In 1975, David Tran began making chili sauce in Vietnam. His first hot sauce was called Pepper Sa-te, which he sold in recycled glass baby food jars, which his family sold and distributed by bicycle.

Four years later, Tran left Vietnam on a Taiwanese freighter, which was called Huey Fong - a name that inspired him to call his company after it: Huy Fong Foods.

David Tran was accepted by the United States as a refugee when no other country would.

In 1980 he started making his chilli sauces in a 5,000 square food building near Los Angeles' Chinatown.

The chilli sauces grew in popularity and the rest, as they say, is hot chilli history.

The now-global brand is based at a 650,000 sq. ft state-of-the-art facility and sells internationally.

However, some people say that the history of sriracha sauce goes back 80 years to a Thai-based company called Thaitheparos. They created a similar hot sauce called Sriraja Panich.

The first thing to do when wondering, "Is sriracha vegan?" is to grab a bottle and check out the ingredients list.

These are the ingredients in Huy Fong Sriracha Sauce (rooster sauce):

So, the ingredient that we need to consider is sugar.

This is not a simple answer! Many sriracha is vegan, but not all brands. This is because sriracha contains sugar and not all sugar is vegan.

Above, we looked at each ingredient in sriracha. One ingredient, sugar, must be explored further to find out, is sriracha vegan?

Some sugar is filtered through bone char, thus making it not safe for a vegan diet.

In many countries, sugar is vegan because it comes from the sugar beet plant or is filtered with no animal products.

However, in the USA, some sugar is filtered through bone char, so look for Certified Organic cane sugar. UK sugar isn't processed with bone char.

Be sure to look at your labels, because some brands of sriracha contain honey or fish sauce, which are not vegan.

Yes. Huy Fong Foods' Sriracha is vegan. However, it doesn't state this on the label.

There is a lot of information on the internet, saying that Huy Fong Foods use sugar that is filtered through bone char.

So, I went straight to them to see what the current situation is.

Here is their response:

Based upon a survey of our ingredient supplier’s vegetarian/vegan statements, we can state that no animal products or byproducts are used to manufacture any Huy Fong Products.

Several years ago, there were reports of “natural charcoal” used in the sugar filtering process but after reviewing statements from our suppliers, it was confirmed that there are no animal filtering products currently used in their process.

However, we still will avoid declaring that any of our products are vegetarian or vegan to avoid any mislabeling or misinterpretation that can occur due to facts that we are not aware of since we rely solely on the statements from our suppliers.

These sriracha sauces are safe for vegans:

Note: This information is correct at the time of writing. Brands might change their ingredients, suppliers, and formulas, so whether or not your sriracha is vegan could change. We will try to keep this updated with the latest information wherever possible.

If you know of any more vegan sriracha sauces, let me know and I'll add them to this list!