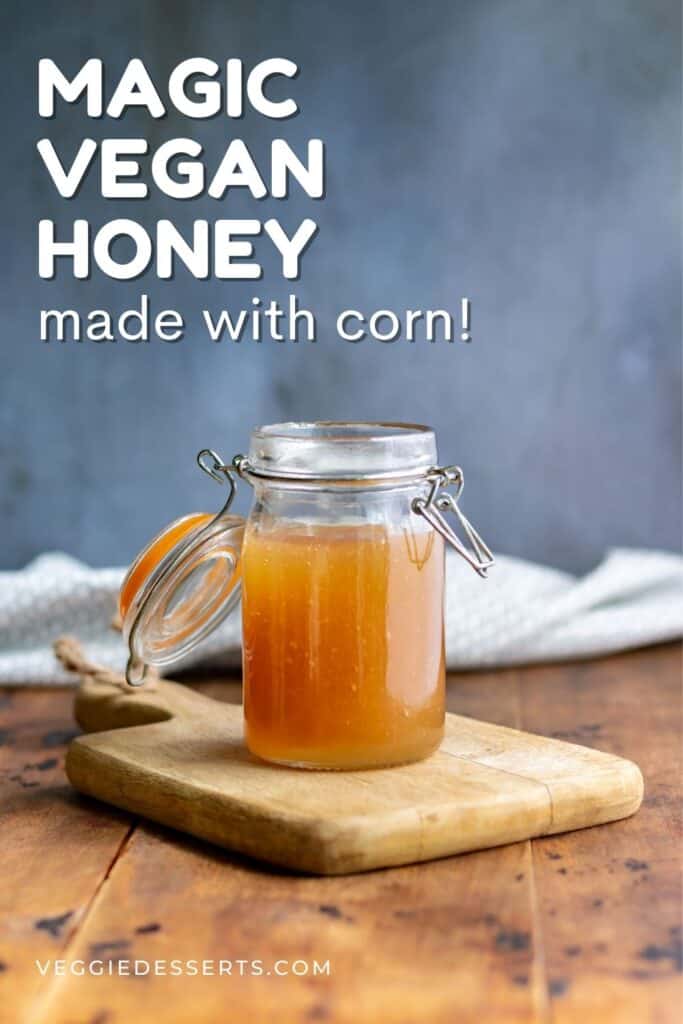 Make this magic Vegan Honey with just 3 ingredients! It's thick, sweet, and has a distinctly honey-like flavor. It's made with a VERY unusual ingredient that would otherwise be thrown away. Trust me, you're going to love it. It's going to blow your mind.
Spread it on toast, sweeten your tea, or drizzle onto a stack of vegan pancakes. This versatile vegan honey is out-of-this-world good!

You can make your own veganized honey substitute at home, with a VERY unusual ingredient!

An ingredient that you'd never believe can be turned into thick, sweet honey.

It's not dandelions (there are a few vegan honey recipes using it, but they're not easy to get year-round).

Nope. My vegan honey is inspired by an old homesteading recipe that uses a food that would otherwise be thrown away and wasted.

This vegan honey is made with..... brace yourselves... corncobs!!

Boiling up corn cobs with sugar and adding pectin (like goes in jam) turns into this magical vegan honey!

This vegan honey recipe is based on a very old homesteading recipe for corn cob jelly. I've actually been making it for years, but just hadn't gotten around to blogging it!

It's a great way to turn food waste (cobs) into something pretty special.

I've seen other ways to make vegan honey, using dandelions or other unusual ingredients. But I love that this uses corn cobs that would otherwise be thrown away! Plus, it tastes sooo much like honey.

I use this vegan honey on hot toast or crumpets. It's wonderful on cornbread. I also love it stirred into a cup of tea to sweeten it.

This was inspired by my other veganized recipes on this site, including vegan mayo and vegan worcestershire sauce. Be sure to check out my vegan grocery shopping list too!

No, honey isn't vegan. It's a common misconception that honey is vegan even though it's made from an insect and not an animal and the bees don't necessarily die during harvest.

However, since vegans believe it's unfair to exploit the labor of bees that provide honey, it's not considered a vegan sweetener.

Bees make honey for themselves as an energy source. Farmers take their honey, then replace it with sugar which isn't natural to them, or as nutritious, so it's exploitative. Also, mass bee farms can have practices where bees can be killed during or after harvest.

The good news is there are plenty of vegan alternatives to sweeten your food and drink, including this recipe for corncob jelly.

Believe it or not, the cobs of corn make an excellent honey substitute when boiled with sugar (ensure it's vegan), water, and a bit of thickening pectin.

Use this sweet treat in your favorite drinks or wherever you need a bit of sweet flavor!

It's made with three simple ingredients that can be found anywhere - corncobs, sugar, pectin (and water).

The entire recipe takes under 1 hour to make.

It's a great substitute for honey that is 100% vegan.

It's great in drinks, as a spread (delicious on toast with vegan butter) and can be used in some desserts.

I know, you're thinking "Vegan honey is made out of WHAT??" But trust me, it works!

Please see the recipe card below for quantities.

Wondering how to make this vegan honey recipe? It's easy! Just follow this step-by-step photo tutorial. Then, scroll down for the recipe card for the full ingredients list and recipe method.

Prep the corn cobs: Remove the husk and the silk from the corn and cover with water in a large pot. Boil for 5 minutes before removing (save the cooking water in the pan) and rinsing in cold water. Shave off the kernels and save them for another recipe.

Boil the corncobs: Add the cobs back to the water and boil for 30 minutes.

Strain the water: Remove the corn cobs from the water. Strain 1 cup of the cooking water through a fine-mesh strainer (or nut milk bag) and discard the remaining water.

Assemble the vegan honey: Pour the strained water into a small saucepan and whisk in the pectin. Bring to a boil, then add the sugar and let it simmer for 5 minutes. Remove any foam or impurities that settle on top with a spoon, and strain if necessary (careful, it's HOT!). Cool, then pour into a sterilized jar and allow the honey to cool completely before refrigerating.

HINT: The vegan honey will thicken to more of a jelly in the fridge. You can stir it to get it back to a runny pouring honey consistency.

Choosing vegan sugar is very important for this recipe. In the US, go for organic sugar as it’s not usually filtered with bone char. Most other countries don’t process sugar this way, so sugar should be vegan - but check the packaging to be sure.

When removing the corn kernels from the cobb, make sure you are using a very sharp knife as it is much safer! Save the kernels for another recipe (like these Chipotle Tortilla Bowls).

It's natural to have some foam and impurities rise to the surface of the boiling water, just lightly skim them off with a spoon before distributing the jelly into jars.

The jelly by itself will be a clear color with a light yellow/amber tint.

The sugar liquid will be VERY hot and can cause serious burns if splashed on your skin. Be sure to remove and strain any liquid very carefully.

Use your vegan honey as a sweetener in hot drinks.

Spread it on toast for breakfast.

Drizzle it on vegan pancakes or vegan waffles. Perfect drizzled on oatmeal or baked oats too.

I love it swirled into coconut yogurt and topped with fresh berries.

Drizzle it on cake. It would be amazing with a vegan vanilla cake.

I've obviously not tested it as a sweetener in all dessert recipes, but in recipes where honey is the star (such as a honey frosting) it should work.

Stir in some cooked kernels to the final product for a chunky corn jelly.

You can use light or dark brown sugar instead of white sugar for a deep caramel flavor.

A few drops of vanilla extract gives this vegan honey a warming flavor.

You can add cinnamon or Pumpkin Pie Spice to the jelly to serve in Fall recipes.

Storing: Vegan honey in a sterilized jar will stay fresh in the fridge for 2 weeks.

If you want to store the vegan honey for longer, perhaps for giving as a gift, then be sure to can it using the water bath method, so it lasts for a year.

Freezing: You can freeze corncob jelly for up to 3 months. Just make sure the jar or container has enough room for the jelly to expand as it freezes. Thaw in the fridge overnight before serving.

Is the cob of the corn edible?

Unfortunately, no. But this recipe is a great way to use up all parts of the corn cob without any waste!

Why do vegans think honey is cruel?

Bees work very hard to make honey as it is the labor of their lifetime. Vegan ideology states that no animal (or bee) should be exploited for their labor which makes honey unsuitable for a vegan lifestyle.

Pectin is made exclusively from plants (mostly apple pulp and fruit skins) and can safely be used while following a vegan lifestyle. 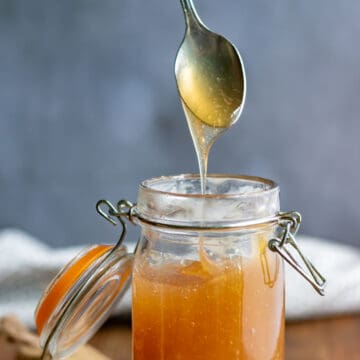