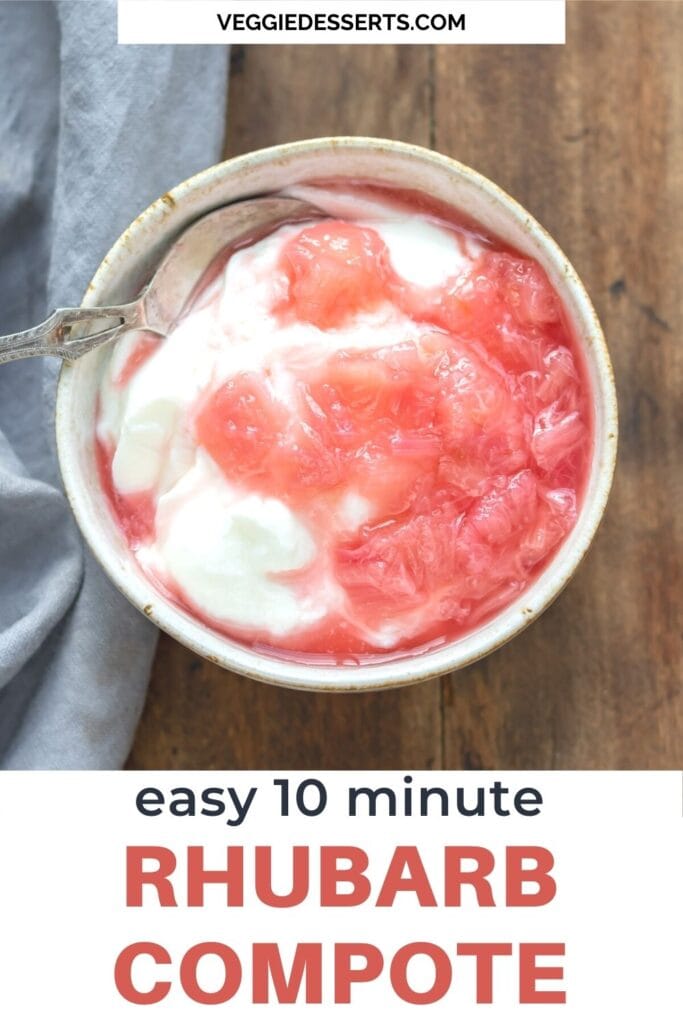 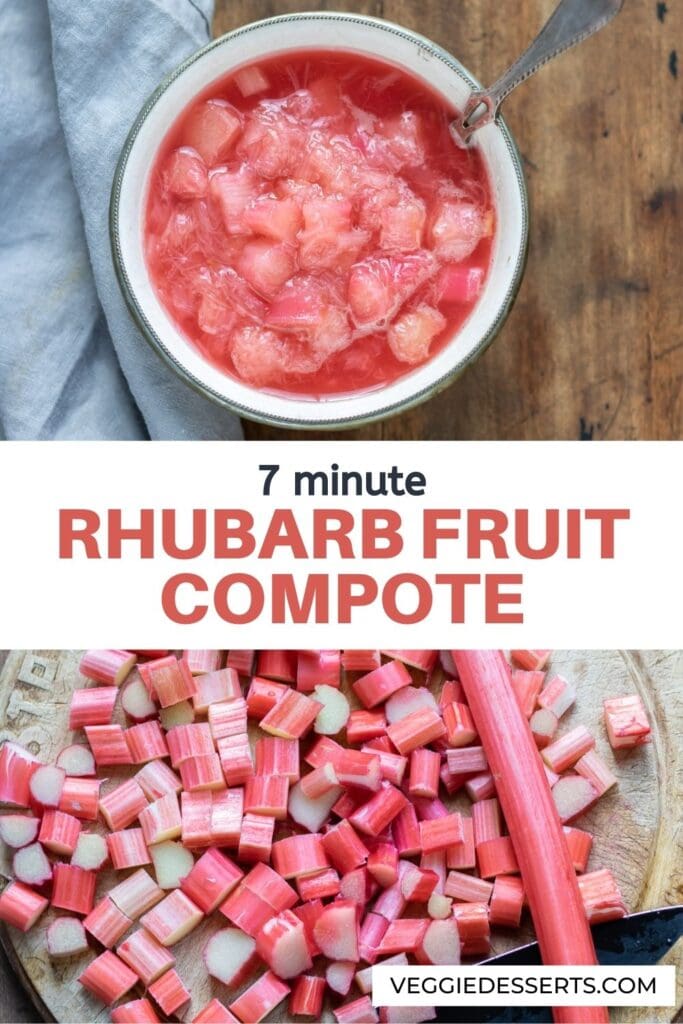 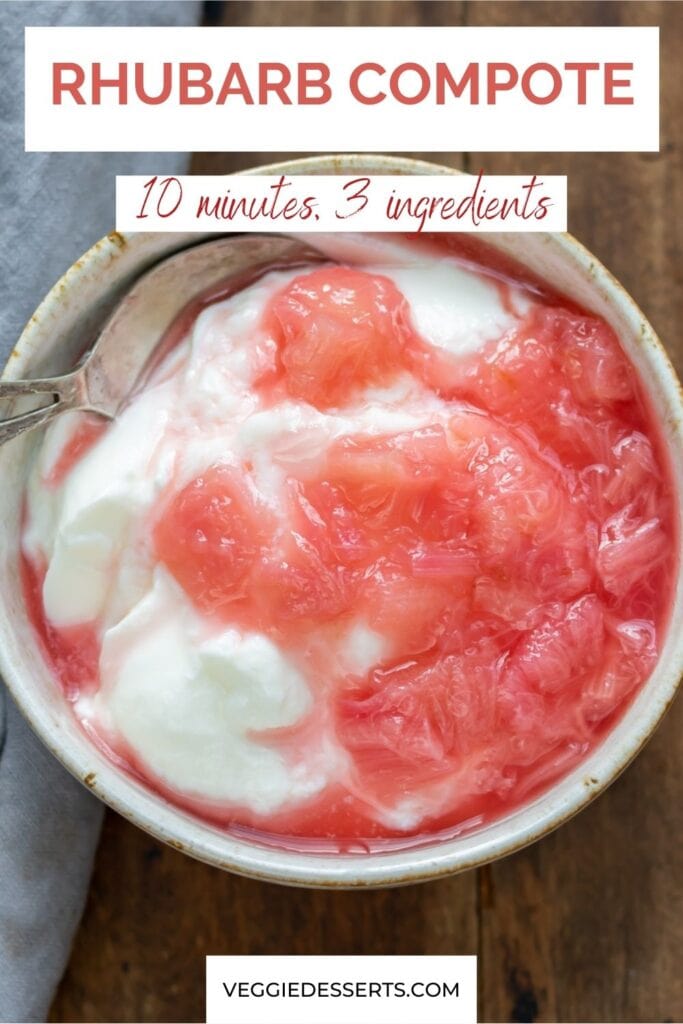 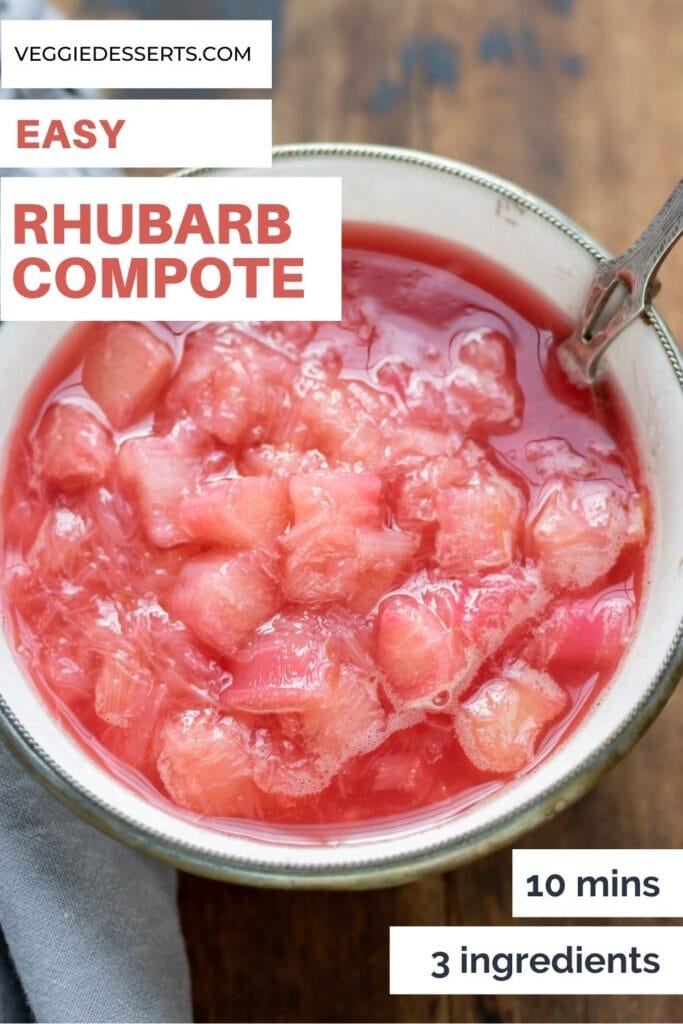 This easy Rhubarb Compote recipe uses fresh or frozen rhubarb to make a delicately sweet and tangy topping. Serve it on top of ice cream, yogurt, waffles or your favorite dessert! Make it in 7 minutes with 3 ingredients.

Rhubarb compote is a sweet and tangy topping that you can make in just a few minutes with 3 ingredients!

All you’ll need to do is cook down fresh or frozen chunks of pretty pink rhubarb with sugar and orange juice.

The result is a delightful homemade topping from scratch that tastes great on breakfasts and desserts.

Then you have a sweet, tangy rhubarb sauce to add to yogurt, pancakes, cheesecake, ice cream etc...

It adds some serious pizazz to so many dishes. Just like other fruit compote recipes. Compotes are such an easy way to use up seasonal fruit to create a tasty topping.

Rhubarb is the edible green, pink or red stalk of the rhubarb plant The celery-like stems are the only edible part of the plant and the leaves are not safe to eat.

With its dense texture that softens as it cooks, and its pretty color, rhubarb is such a unique food to use in cooking.

The texture is similar to celery and it’s very bitter and tangy when eaten raw.

Botanically a vegetable, once it’s cooked up with some sugar, the flavor is delicate and delicious.

Most famously, rhubarb is used in recipes like pies, salsa, and chutneys but it also makes a wonderful compote.

You can use fresh rhubarb when it’s in season between April and June and tastes its best.

The recipe only needs 3 ingredients (plus water!) making it simple and budget-friendly.

Rhubarb compote can be used as a topping for many different breakfasts or sweet treats.

A great way to use rhubarb that’s not in a rhubarb pie or crumble/crisp. Be sure to also try Rhubarb Sauce, which is great on both sweet and savory dishes.

Rhubarb is a great source of magnesium and fiber as well as other vitamins and minerals.

The natural pink color it creates is visually stunning!

The sweet yet tangy taste is out-of-this-world delicious.

Wondering how to make this recipe? Follow this step by step photo tutorial, then scroll down to the recipe card for the full ingredients list and method.

Chop the rhubarb into small chunks.
Add to a pot with the sugar, orange juice and water.

Bring all of the ingredients to a boil, then reduce the heat and simmer for 5 minutes or until soft but not completely broken down. Allow to cool slightly and serve.

When choosing rhubarb, make sure you are picking out stalks that are bright, firm and tender. Ones that are wilted and weak will result in a less vibrant flavor.

When boiling the rhubarb, you want to make sure not to boil it too much to the point it breaks down completely. You still want it to break down but have edible pieces. This should take about five minutes.

Rhubarb compote will thicken as it cools.

Pour some on top of this hearty Baked Oatmeal.

Dollop onto plain yogurt and add a few slices of banana.

Spread it on toast instead of jam.

Makes a great topping to serve with this classic Vegan Cheesecake.

Serve it alongside some Fluffy Vegan Pancakes for breakfast or some Vegan Waffles.

Switch up the citrus flavor by using lemon, lime or grapefruit juice instead of orange.

Give this rhubarb compote a warming flavor by adding a pinch of ground ginger, ground cinnamon or Pumpkin Pie Spice.

Add your favorite fruit along with the rhubarb such as strawberries, blueberries, raspberries, or blackberries.

Give the compote a hint of natural spice by grating in some fresh ginger.

Storing: Store any leftover rhubarb compote in a glass jar with a lid in the fridge for up to 2 weeks.

Freezing: Compote can be frozen in small batches in freezer-safe bags with the air removed for up to 3 months. Let thaw in the fridge completely before serving.

Where is rhubarb in the grocery store?

You can usually find rhubarb in the produce section of your grocery store often near the root vegetables and celery. If it’s in season, it may be placed in front of the store.

Can you eat raw rhubarb?

Rhubarb can be eaten raw but the taste is not recommended as it is very bitter and tart. Most recipes called for cooked rhubarb to enhance the flavor. Though as a child we used to pick it from the garden and eat the raw stems dunked into a bag of sugar!

While the stalk of the rhubarb plant is edible, the leaves contain high amounts of oxalic acid, which can cause digestive upset in humans and animals so is considered toxic and should not be eaten.

If you love this rhubarb compote recipe, be sure to try these other fruit compotes too!

And all these other great Fruit Compote Recipes

Get your free Cookbook!

We know time can be tight. Whether you're vegan or just want to add some easy meat-free meals to your meal plan, we've got you covered. Download your free 15 Minute Vegan Dinners e-Cookbook, full of quick, easy and tasty recipes! You’ll also be added to our mailing list to receive new recipes via email as soon as they're published. 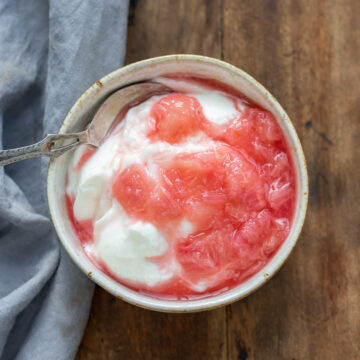 Switch up the citrus flavor by using lemon, lime or grapefruit juice instead of orange. Give this rhubarb compote a warming flavor by adding a pinch of ground ginger, ground cinnamon or Pumpkin Pie Spice. Add your favorite fruit along with the rhubarb such as strawberries, blueberries, raspberries, or blackberries. Give the compote a hint of natural spice by grating in some fresh ginger. Storing: Store any leftover rhubarb compote in a glass jar with a lid in the fridge for up to 2 weeks. Freezing: Compote can be frozen in small batches in freezer-safe bags with the air removed for up to 3 months. Let thaw in the fridge completely before serving.