Check out these great vegan soup recipes! Here you will find dozens of delicious plant based blended soups, chunky hearty plant based soups and vegan Instant Pot soups. You're sure to find a delicious recipe that's perfect for you.

Whether you're vegan, doing Veganuary (going vegan for the month of January), you're dairy free, veggie or just trying to eat more plant based meals, you're sure to find loads of great recipes in this epic soup roundup.

Soup is a great way to get lots of portions of vegetables in a meal.

They can be filling, easy to make and many freeze well.

I like to make big batches of soups and freeze portions so I can have them for lunch or dinner.

Actually, I often have breakfast soup! It's as warming as oatmeal, and you start the day with nutritious veg.

Here are 25+ plant based soup recipes to keep you warm and full of veggies.

There are loads of recipes here from easy hearty vegan lentil soup to a Malaysian vegan laksa (that actually only takes 15 minutes to make).

In this list below you'll find:
Plant based blended soups

So read on and I hope you'll find some inspiring soup recipes to try!

Courgette Soup with Basil (zucchini soup) // You only need 5 ingredients and 15 minutes for this tasty, healthy soup.

It's velvety smooth and the spiralised raw courgette/zucchini adds a great texture contrast. 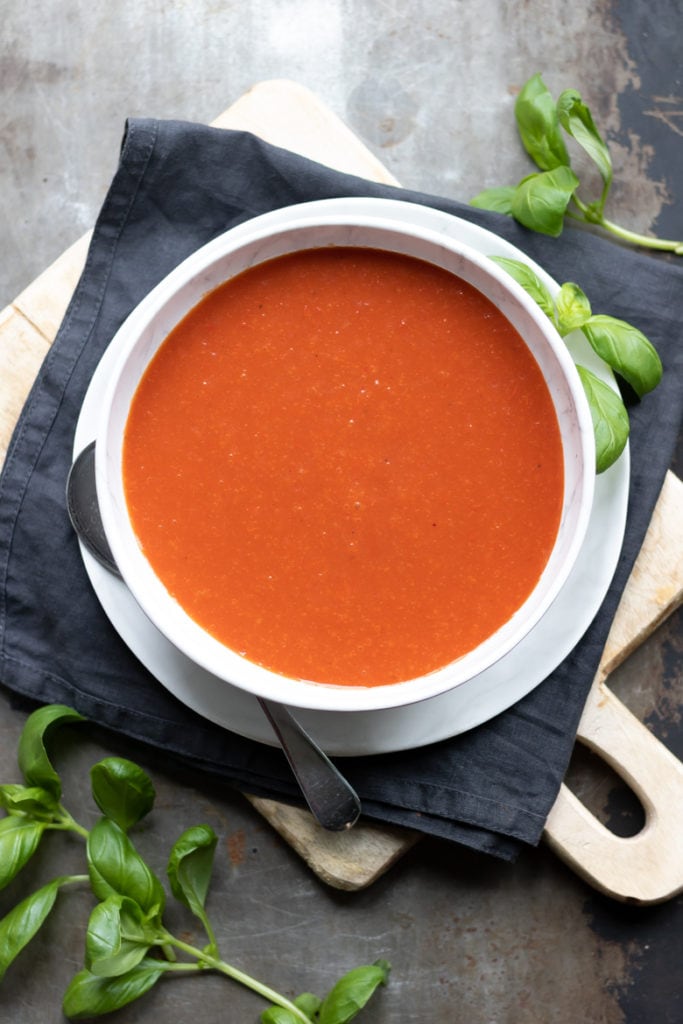 It’s full of flavour, creamy and a healthier version of the classic canned soup.

Celeriac Soup - Roasted celery root is combined with thyme, garlic and stock, then blended into this velvety soup.

Cabbage Soup - this low calorie, healthy soup is perfect for dieting. Just 98kcals with the potatoes or 38 kcals without. 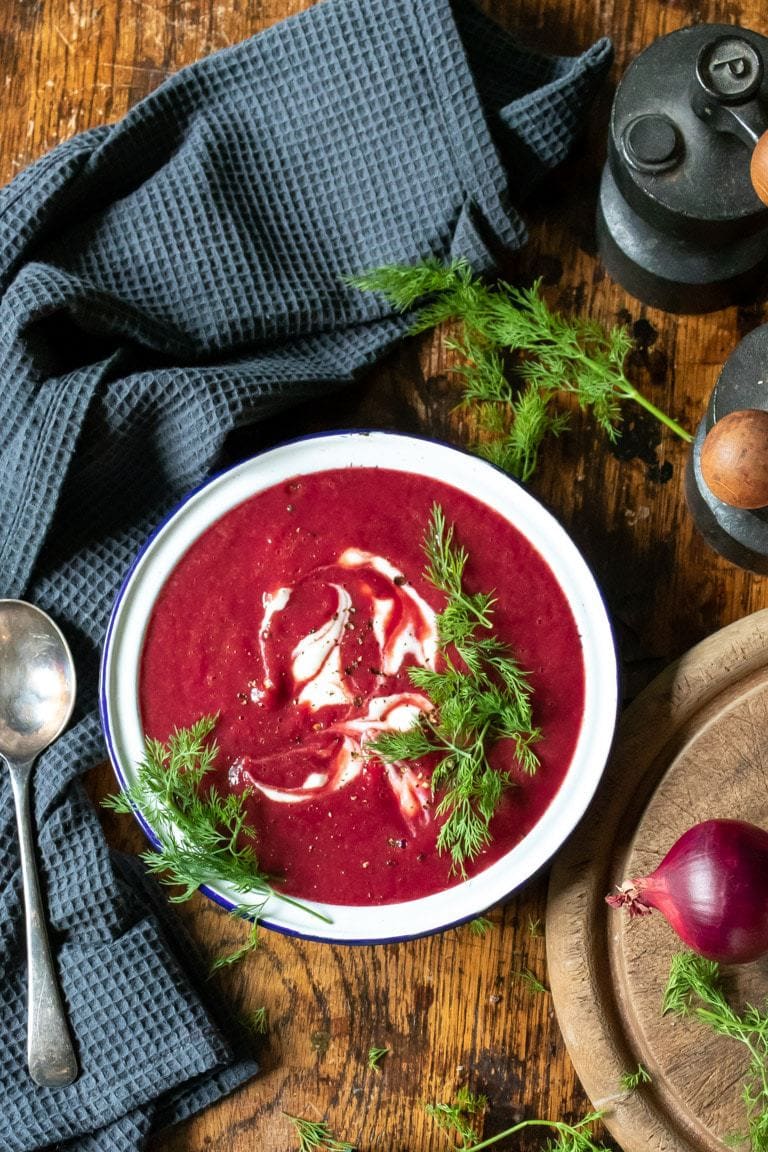 Beetroot Soup // This beetroot soup is vibrant, smooth and full of flavour.

You only need 6 ingredients for this smooth, creamy and tasty vegan or vegetarian beet soup.

It is similar to borscht soup and it’s hearty and filling and each bowl only has 143 calories! 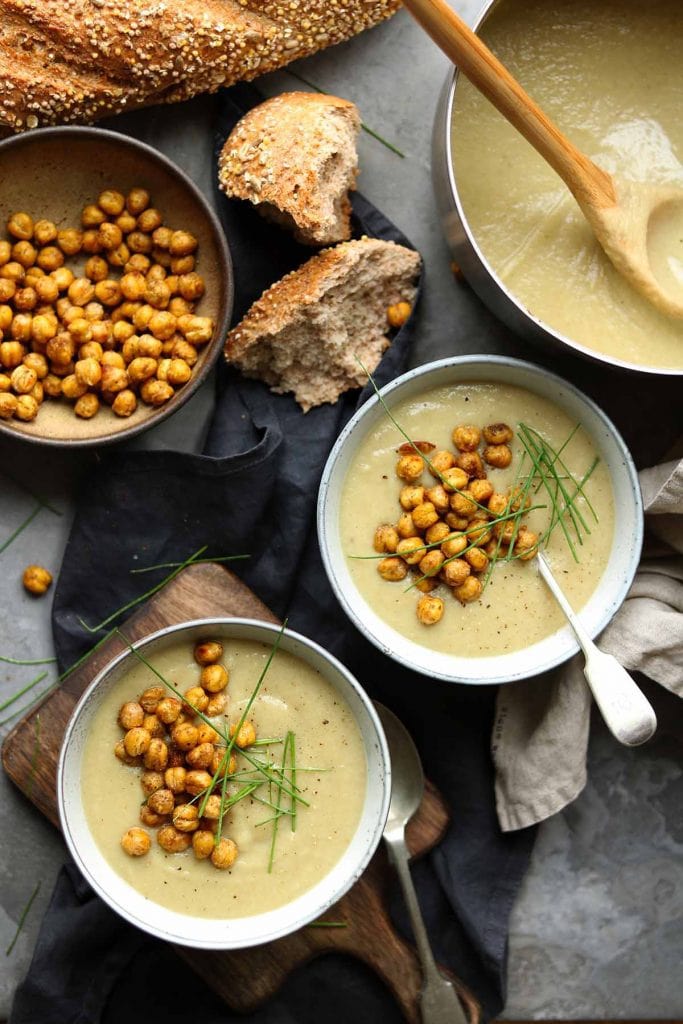 Spicy Vegan Cauliflower Soup // This spicy cauliflower soup from The Last Food Blog is warming and filling, smooth and creamy.

It only takes 30 minutes and it's perfect for those chilly days when you need something really satisfying. 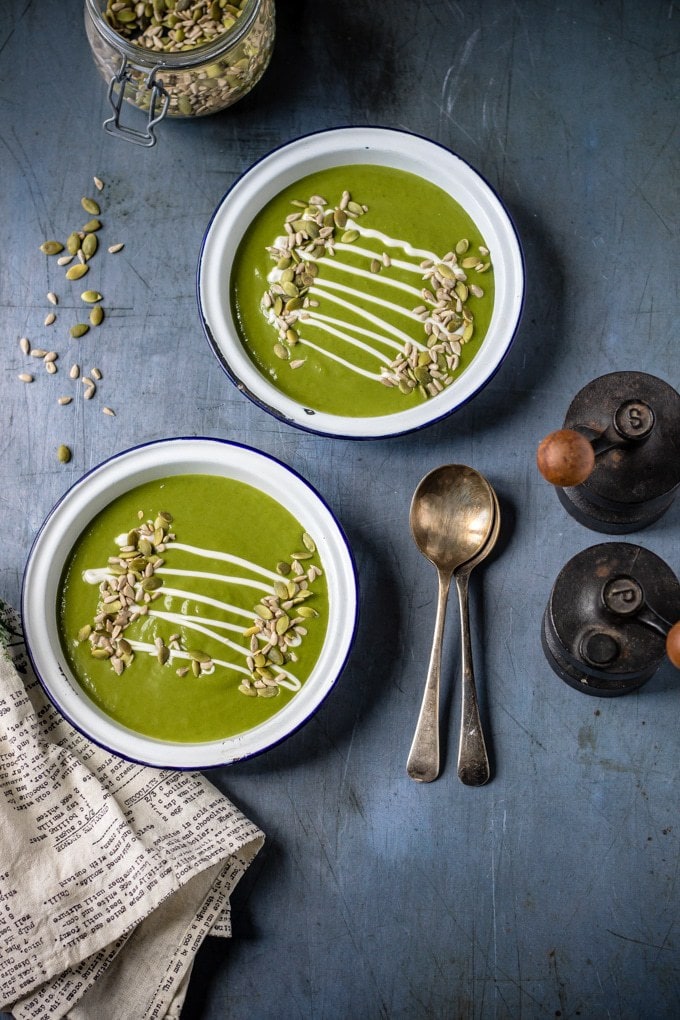 Quick Kale Soup // Ready in just 20 minutes, this thick and creamy kale soup is hearty and tasty and only 150 calories per generous bowl.

Plus it's bursting with green goodness.

It's deliciously creamy from the cashews, light from the zucchini and ready in just 20 minutes. 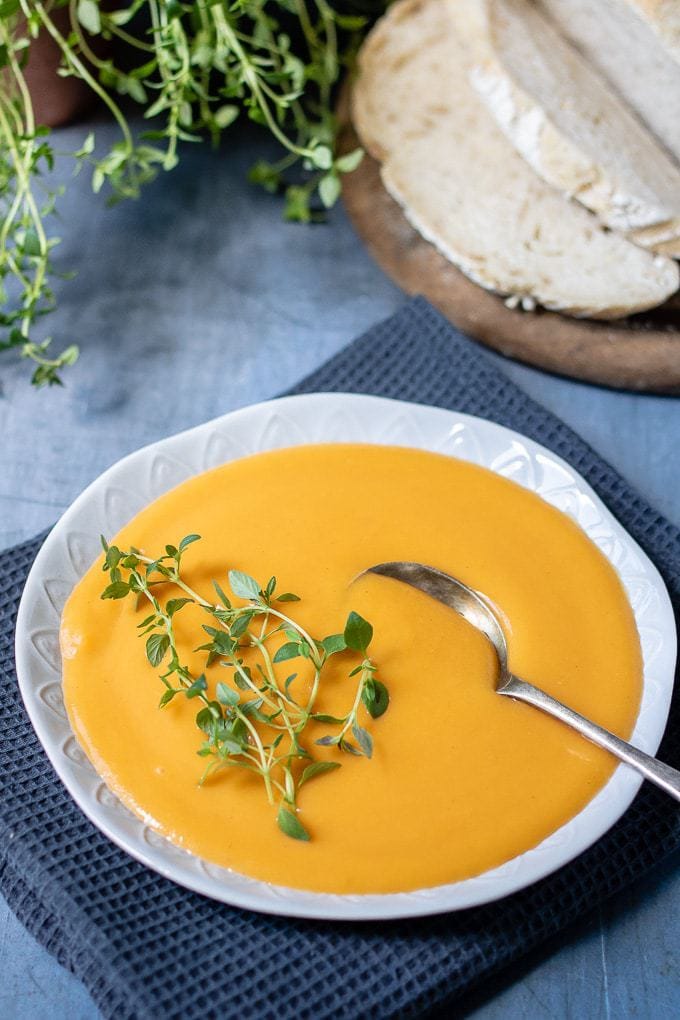 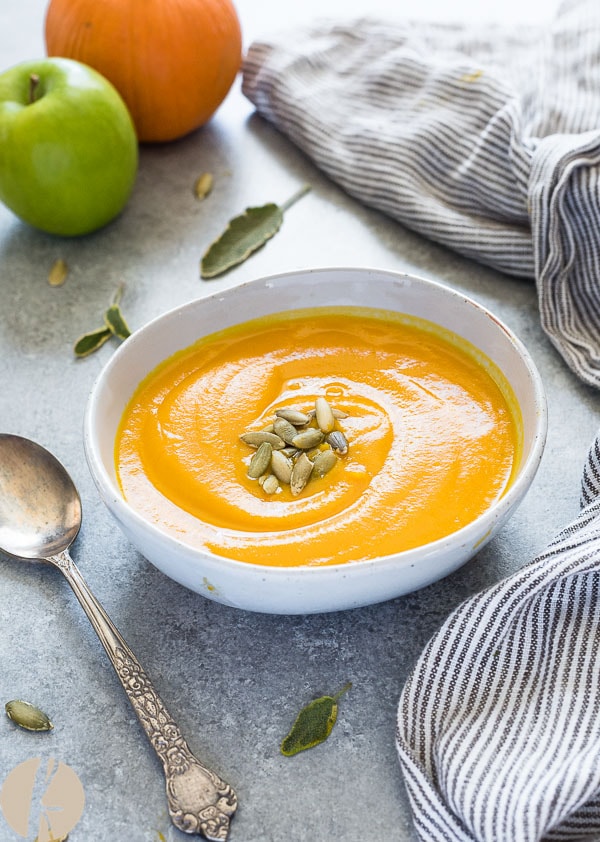 Easy Vegan Laksa // This easy Laksa (Malaysian soup) is ready in under 15 minutes, and it’s bursting with flavour from the coconut milk, chilli and turmeric. 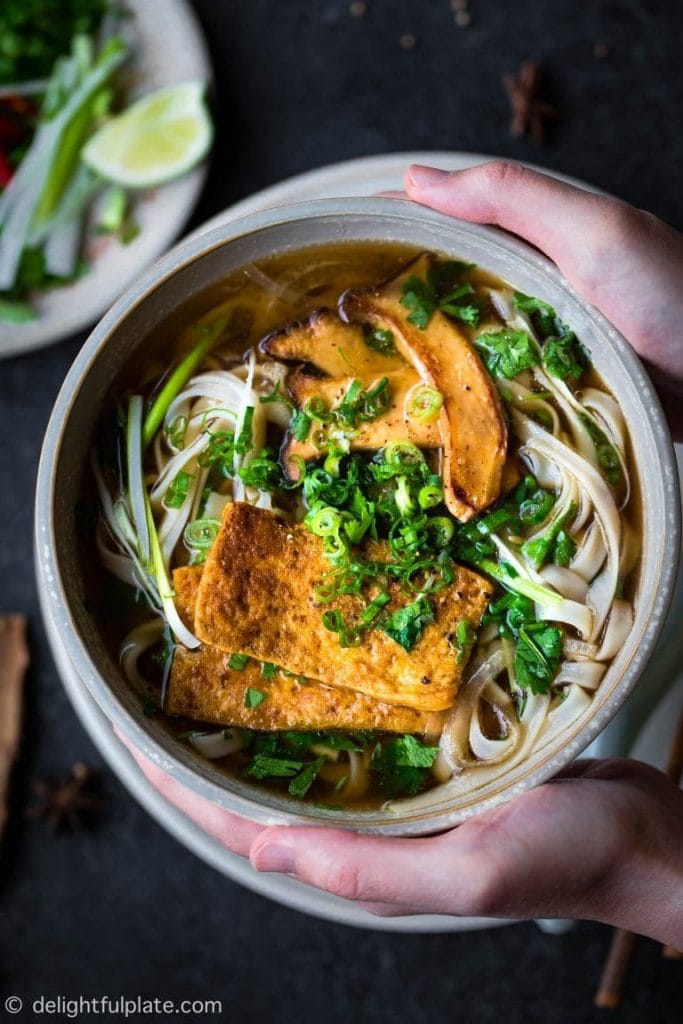 While this vegan pho from Delightful Plate is quicker to make than traditional beef pho, it is just as comforting and delicious. 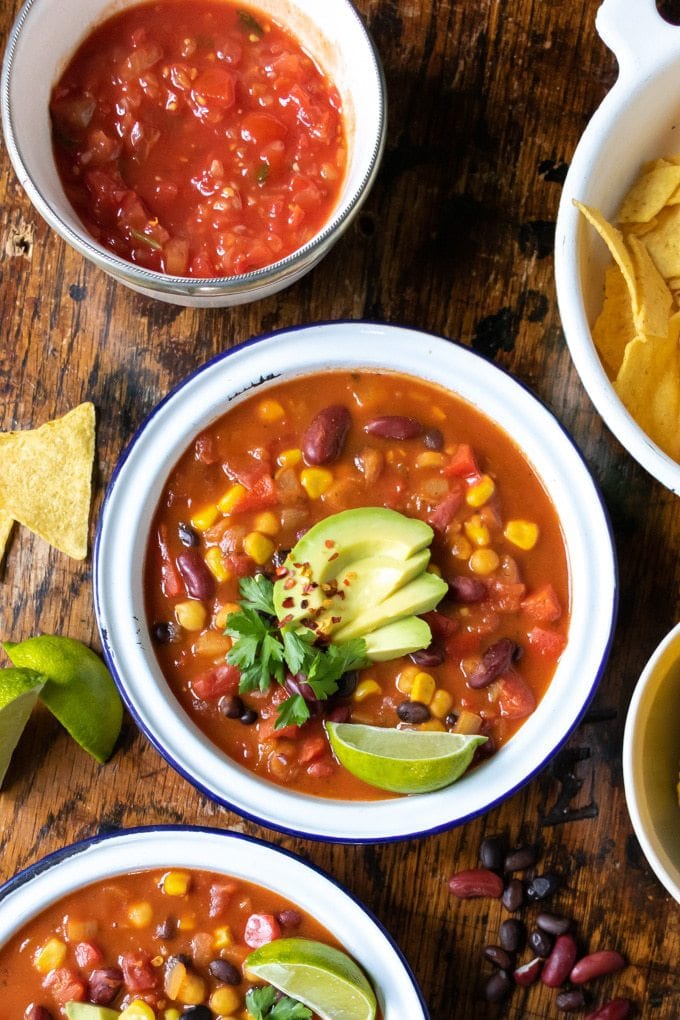 It’s rammed with beans and veggies, and is deliciously spiced and warming.

The best thing is you can make this recipe in just 15 minutes!

Shiitake Ginger Broth with Gyoza Dumplings // This Shiitake-Ginger Broth is light and deeply-nutritious, with thinly-cut vegetables and a few juicy gyozas. Kellie from Food to Glow suggests that it's the perfect antidote to heavy winter food and you should sip this wholesome, healing Japanese-inspired soup piping hot for the best cold-blasting effect. 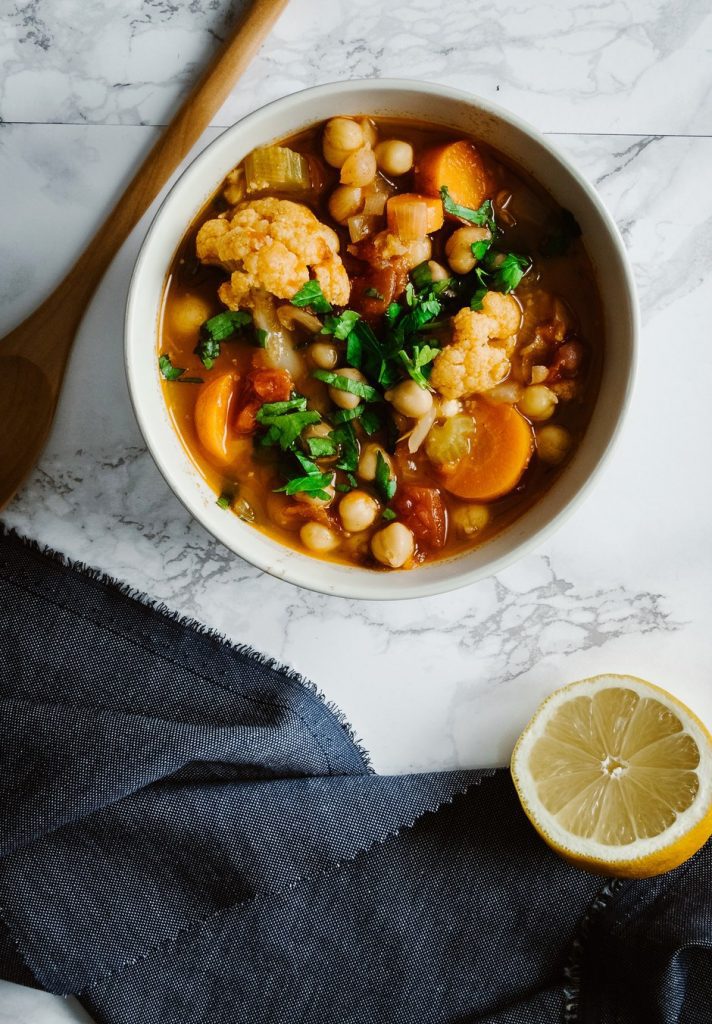 Cauliflower lends it a lovely meatiness and interesting texture, plus cauliflower soaks up so much flavour goodness which makes it somewhat better the next day.

Serve with fresh squeezed lemon and cilantro or parsley.

It's chunky and filling so will satisfy you for ages.

Mel from A Virtual Vegan suggests that you make it even more filling and delicious by adding toppings. 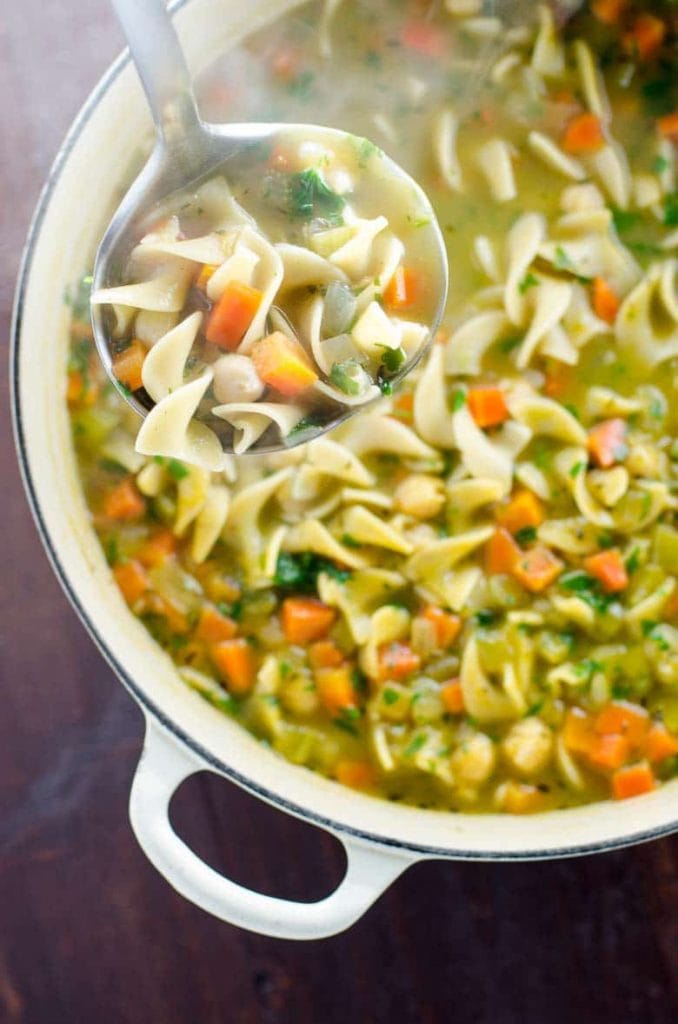 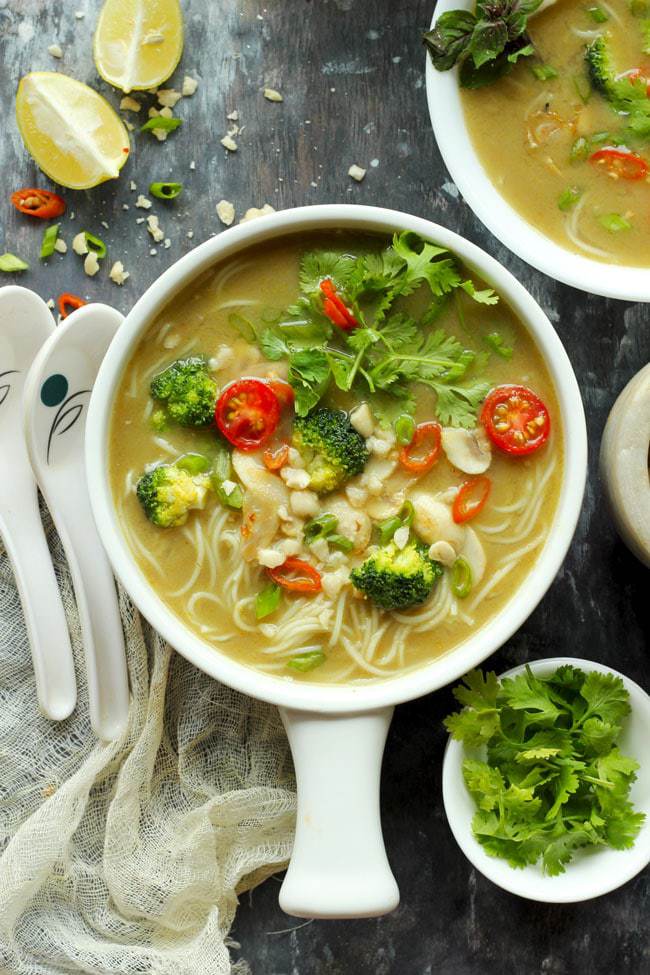 And it is surely going to keep you warm during the cold winter nights. 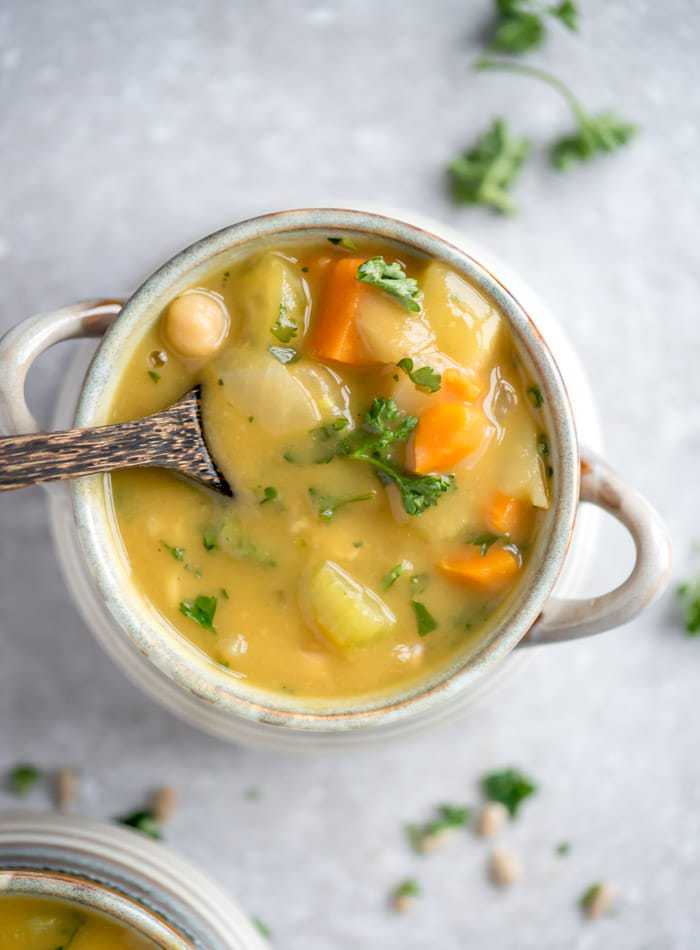 It’s made with chickpeas, potatoes and carrot for a bit of a twist on classic veg chowder. 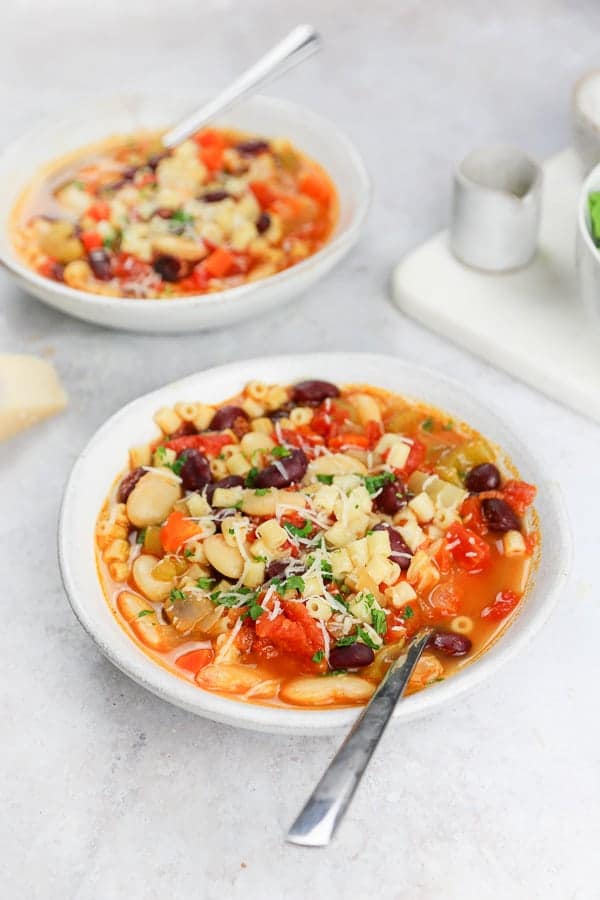 This hearty soup from Little Sunny Kitchen is perfect for a chilly evening as it will not just fill you up, but it will also keep you warm. 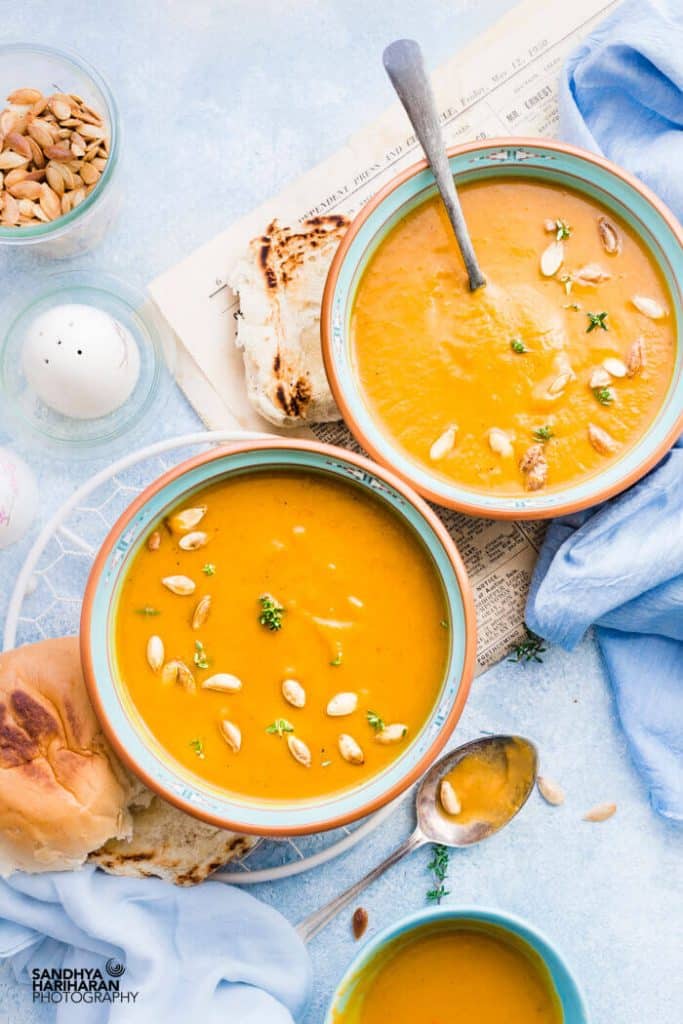 This nut free recipe can be made in the Instant Pot or stovetop. 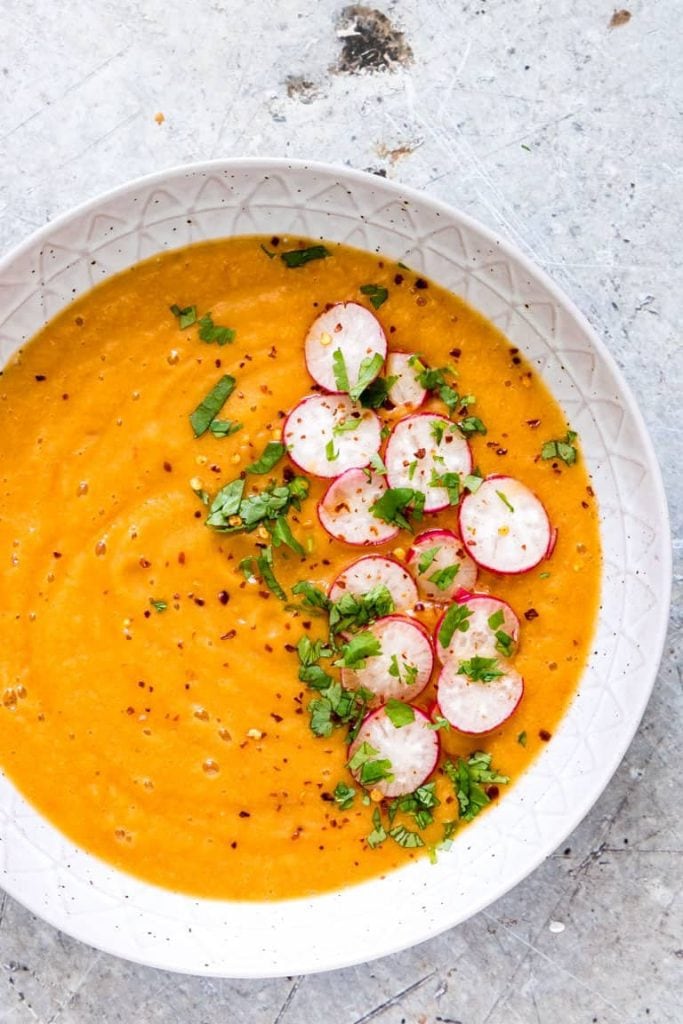 It's perfect for a low carb midweek meal. 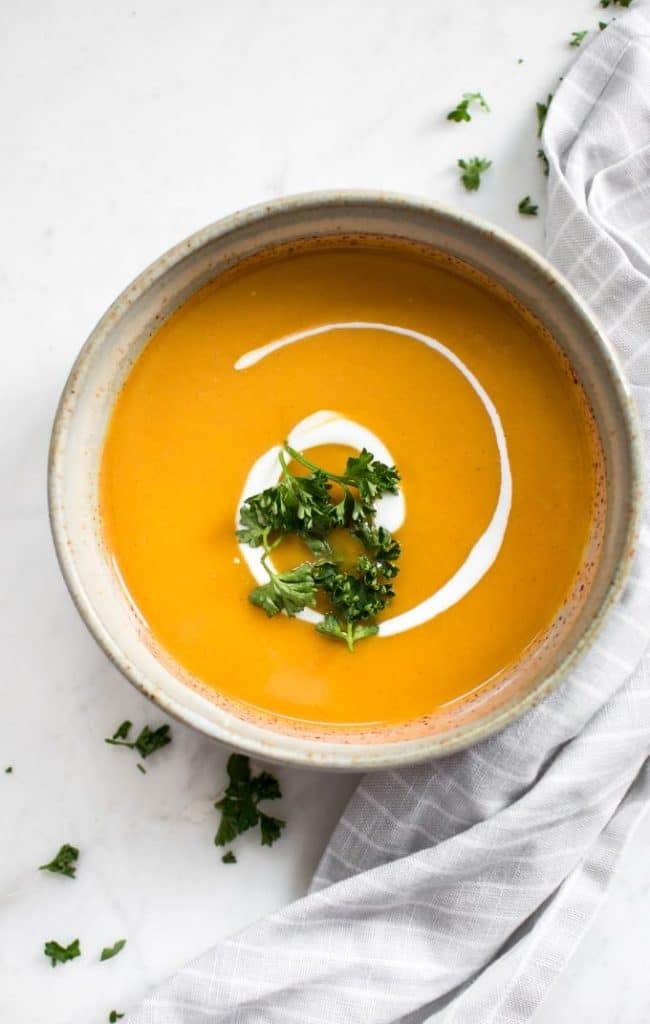 A lovely warming soup for winter or fall. 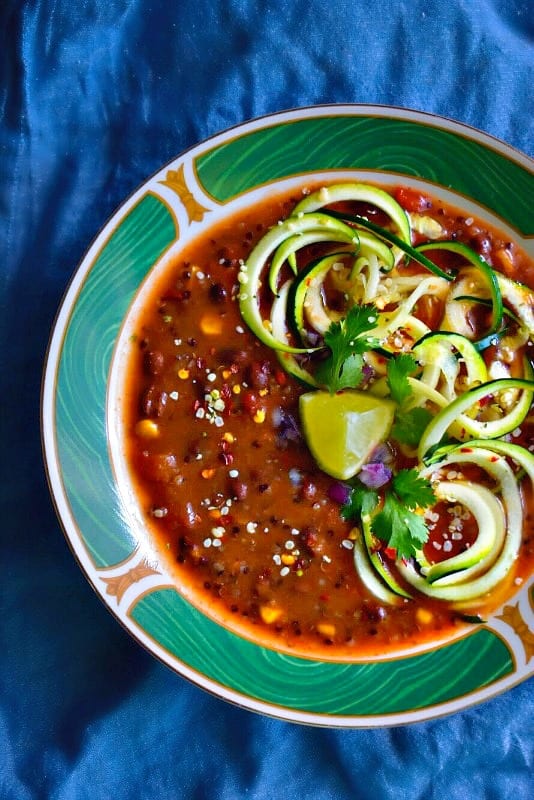 The soup, by Cooking with Molly has smoked chipotle flavors mixed with lentils and topped with zoodles. 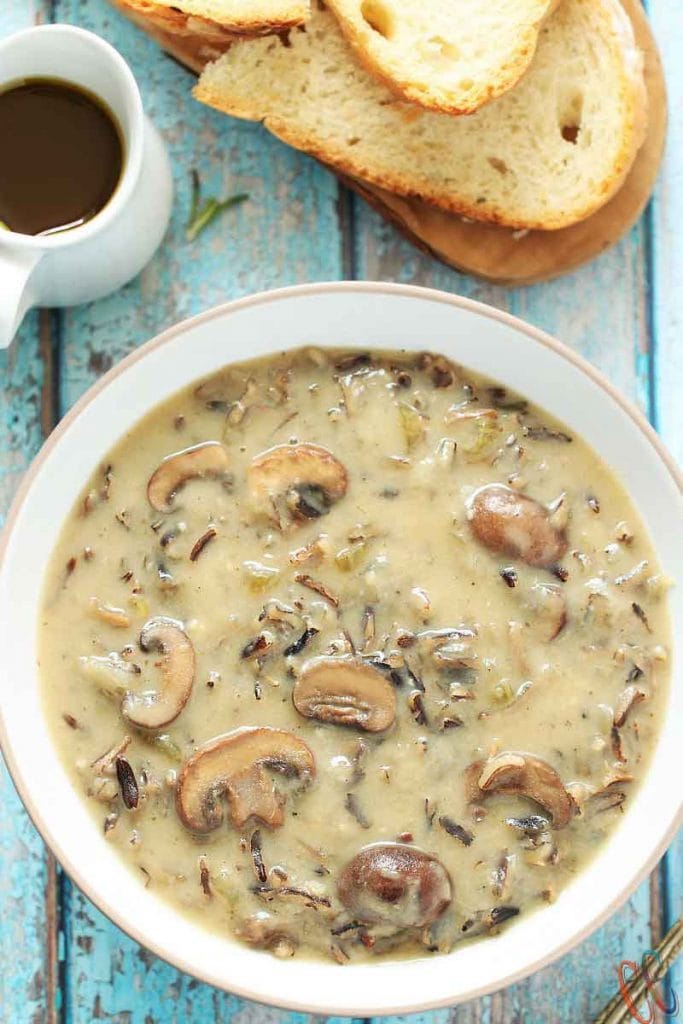 It's creamy, earthy and full of flavor.

There are so many delicious ones to try from blended soups and hearty soups.

Plus I've also added vegan Instant Pot soup recipes for those of you with a pressure cooker.

Please comment below with your favourite recipes because I love hearing from my readers. You all allow me to do what I love and write this food blog, sharing vegetarian recipes, vegan recipes, vegetable cake recipes, vegan cake and also easy vegan desserts.
Kate x

Thanks for letting us know!
This is how we improve bertha
What did you expect to happen?