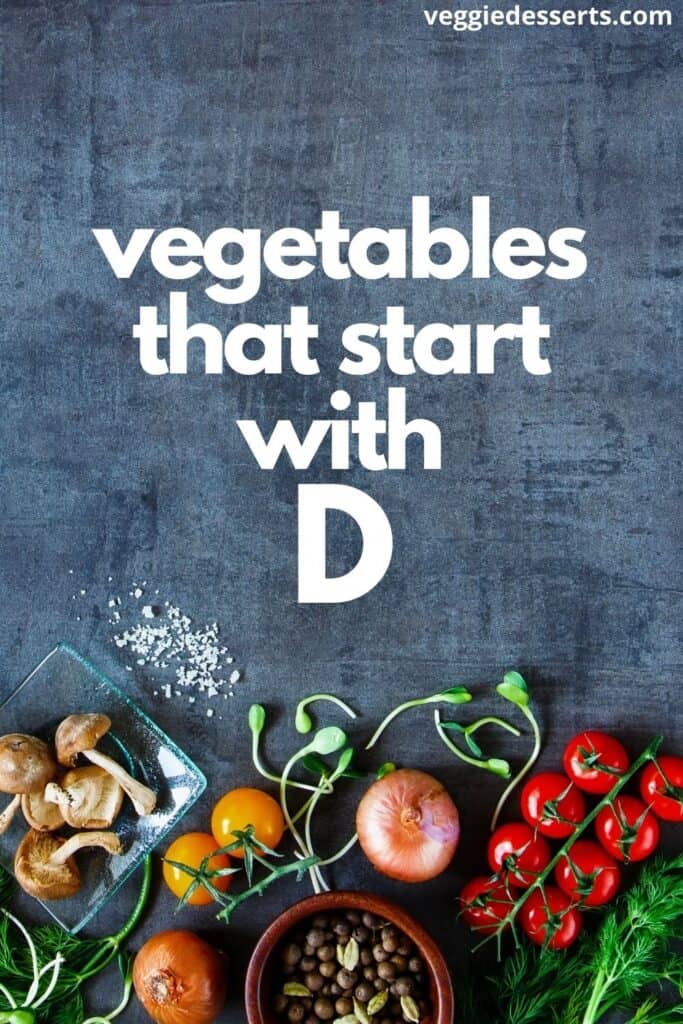 If you're looking for a list of vegetables that start with D, then we've got them right here for you!

If you're working on a school project, doing a pub quiz, or just curious, you might need to know which veg begins with the letter D. Well, here ya go!

We've gathered all the veggies that begin with the letter D and listed them right here for you. There are 12 of them!

So, if you've been scratching your head to figure out all the D veggies, then look no further.

If you know of any other D vegetables, then let us know in the comments and we can add them to this epic list.

Culinary Vegetables: These are edible plants and plant parts that are considered veggies for cooking purposes. They are usually savory or are put into savory dishes. This includes pumpkins, eggplant, tomatoes and bell peppers, which are, botanically speaking, fruits. This list of 'C' vegetable names will focus on culinary veggies.

This vegetables that start with D list was made with culinary vegetables listed.

Here is the list of 12 veggies starting with the letter D!

Roots. Daikon (also known as mooli) is an oblong, white-coloured winter root vegetable with a mildly peppery flavor. It is eaten in many countries and can be served raw, pickled, boiled, sautéed or steamed. You can use daikon like you'd use carrots: in soups, stews, casseroles and salads. Try this pickled daikon recipe.

Leaves. Yes, the garden weed is edible! You can find dandelion greens in farmer's markets and the dark leafy vegetables are full of nutrients. They can be bitter, which is nice in salad balanced with sweeter leaves or cook them and they lose a bit of that bitterness. Try them sauteed with a little butter, garlic and chili flakes as a simple side dish.

Roots & Tubers. Dasheen (also known as taro, yautia, eddo and kalo) is a starchy root vegetable (colocasia esculenta) that grows in tropical and humid environments, such as the Pacific Islands and Hawaii. Dasheen has fuzzy brown skin with distinctive rings, and pale white flesh speckled with purple.

Its starchy texture is similar to a potato, but it’s sweeter. It’s used in a wide variety of ways, including boiled, roasted, deep-fried, or steamed, as well as used in everything from ice cream to cakes!

The root can’t be eaten raw, and gloves should be worn before preparing it, as it can cause skin irritation when uncooked. Try these Taro Recipes.

Fruits. Datil is a small-sized but quite hot pepper, from the species capsicum chinense. Datil peppers are grown throughout the United States, but are mainly produced in St. Augustine, Florida.

Fruit. Delicata Squash is long and fairly thin, with yellow skin with green or orange stripes running down the length. They are named delicata for their thin, delicate skin that is edible. Since they don't need to be peeled, they are popular in cooking.

Delicata squash holds their shape during cooking so are great for stuffing. Try using them in this stuffed squash recipe.

Learn how to cook delicata squash.

Stems. Kohlrabi is a round vegetable with shoots coming out of the top. It has a mild, sweet cabbage-like taste and a crisp, crunchy texture. It can be eaten raw in coleslaw or salad or cooked. Try it steamed, boiled roasted or stir-fried. The leaves can also be eaten. Kohlrabi slaw.

Fruit. Pumpkins are winter squash from the genus Cucurbita. Famously used for carving into a Jack o'Lantern at Halloween, the skin, flesh, and seeds are all edible. Dickinson pumpkins have an elongated shape and usually weigh around 12lbs. Dickinsons are famously used as the variety in canned pumpkin. So you've likely eaten them! Pureed pumpkin in cans can be used in sweet and savory recipes - particularly pumpkin pie.

Try it in Pumpkin Cupcakes, or this list of the best Pumpkin Recipes.

Leaves. The dill plant (Anethum graveolens) has fragrant feathery green leaves and is also known as the dill weed herb. It's seeds are the flat, oval fruits of the plant and are used dried as a spice. Dill seeds are often used in canning dill pickles, while the leaves, dried or fresh, are used in potato salads and many other recipes. Try it in Homemade Dill Seasoning or Dill Pickle Pasta Salad.

Leaves. Dinosaur Kale (aka cavolo nero, lacinto kale or black kale) is Italian kale with long, thin dark leaves. It can be boiled- steamed or eaten raw. Native to Tuscany, it's famously used in ribollita, as well as zuppa toscano. You could even use it to make bright green cavolo nero cupcakes or a cavolo nero Christmas pudding.

Seeds and Pods. Dragon tongue beans have flavorful beans in a beige-colored pod with mottled red/burgundy patterns and average 6 inches in length.

When young, the seeds and pod are eaten, but when mature, the pod is tough so they are shelled.

Seeds & pods. Drumstick Plant (also known as Moringa) has edible leaves, but it mainly cultivated for its seed pods. The leaves, which taste similarly to spinach, can be eaten raw or cooked.

The seed pods have an asparagus-like taste and are used in soups and stir-fries. Try it in Drumstick with Potatoes.

It is also found dried and ground to a powder and sold as a health supplement.

Leaves. Dulse is a type of seaweed that grows on the northern coasts of the Atlantic and Pacific Oceans. It is popular snack food, eaten dried, and has a crispy yet chewy texture. Like other seaweeds, dulse has a salty, ocean taste.

That's it! I hope you've found this list of 'Vegetables that start with D' useful. If any are missing, let us know in the comments and we'll add them.