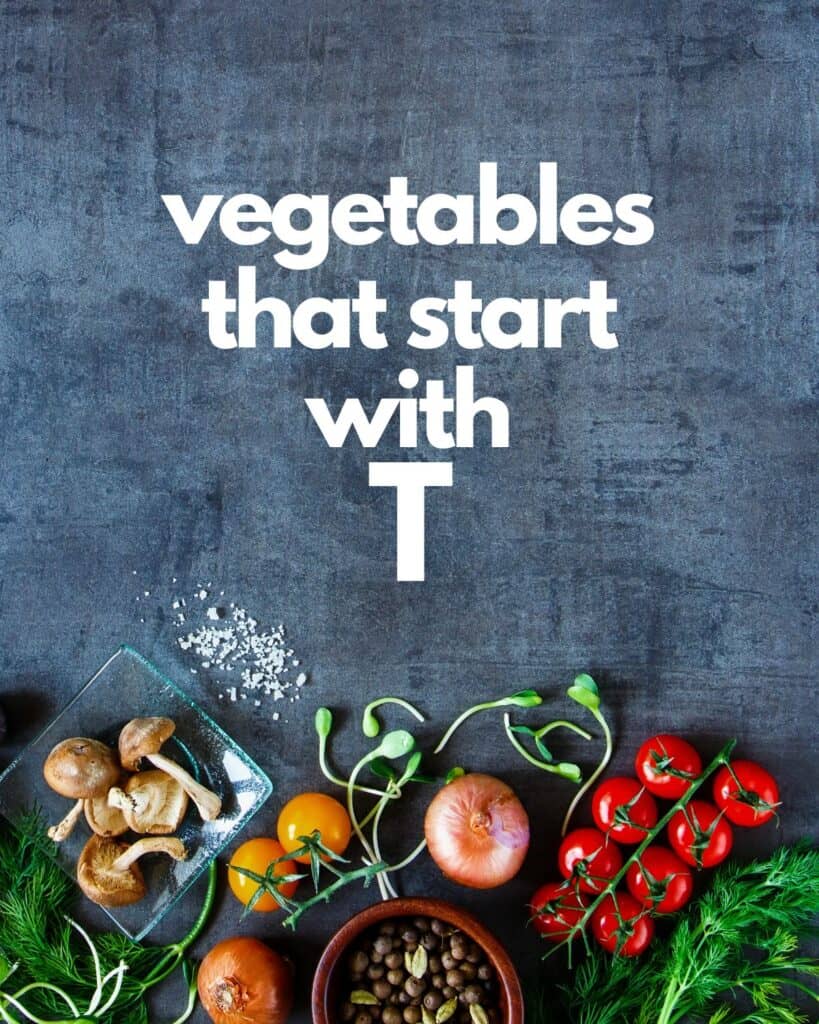 Here are the vegetables that start with T, from Tamarillo to Tuscan Kale. Here are not only the 22 veggies beginning with the letter T in this list, but we'll also give you info, classifications, recipes, pictures, and more.

Our selection of veggies beginning with the letter T has all the ones we know. If you know of any more, let us know in the comments!

A few notes before we launch into the list of vegetables that start with the letter T.

NOTE: This vegetables that start with the letter T list was made with culinary vegetables listed.

Here is the list of 26 veggies starting with the letter T!

Fruits. Tabasco peppers are a type of chili pepper that is native to Mexico. They are typically used to add heat and flavor to dishes, fresh, dried, pickled or in sauce.

When used fresh, they are typically chopped and added to dishes such as salsa or guacamole.

Dried Tabasco peppers can be ground into a powder and used as a spice.

Pickled Tabasco peppers are often used as a condiment, added to sandwiches or burgers.

Fruits. Tamarillo is a small, egg-shaped fruiting vegetable that is native to South America. Also known as the Tree Tomato, it has a thin, edible skin that is red, orange, or yellow in color.

The flesh of the fruit is tart and juicy, and it contains small seeds. Tamarillo can be eaten fresh, or it can be used in jams, jellies, and sauces.

Roots & Tubers. Taro is a starchy root vegetable (colocasia esculenta) that grows in tropical and humid environments, such as the Pacific Islands and Hawaii. Taro root has a fuzzy brown skin with distinctive rings, and pale white flesh speckled with purple.

Its starchy texture is similar to potato, but it’s sweeter. It’s used in a wide variety of ways, including boiled, roasted, deep fried or steamed, as well as used in everything from ice cream to cakes!

Taro root can’t be eaten raw, and gloves should be worn before preparing it, as it can cause skin irritation when uncooked. Other names for taro are dasheen, yautia, eddo and kalo. Try these Taro Recipes.

Seeds. Tarwi is a type of bean that is native to the Andes region of South America. It is also known as tarhui, tarhuino, or Peruvian lupin.

Tarwi is a high-protein food that has been a staple of the Andean diet for centuries. The beans can be cooked and eaten whole, or they can be ground into a flour and used to make breads and other dishes.

Tarwi is also a good source of vitamins and minerals, and it is thought to have some health benefits.

Leaves. Tatsoi (also called Tat Choy or Chinese flat cabbage) is an Asian variety of Brassica rapa that is grown for its edible greens leaves. The leafy green vegetable can be eaten raw or cooked and used similarly to spinach. Try it in Spicy Stir Fried Tatsoi.

Seeds & Pods. Tepary Beans (Phaseolus acutifolius) are a legume that is grown in Mexico and the Southwest USA. The small round beans range in color from white to brown, with the white ones being the sweetest and the brown having an earthy flavor. They can be eaten fresh from the shell, but are usually used dried and then cooked. Tepary Beans are also called Pavi, Tepari, Papago Bean, Pawi, or Escomite. Try them in Tepary Bean Dip.

Fruits. Thai Eggplants (Solanum melongena) are a variety of eggplants that are small, round and green, white, or purple. They’re popular in Sri Lankan cuisine, amongst other Southeast Asian countries.

There is no need to peel, salt, or soak Thai Eggplant. They can be eaten raw, used in chilli pastes, or, most commonly, used whole or chopped in curries.

Flowers, leaves and stems. Allium triquetrum, also known as three-cornered leek, is a perennial plant in the onion genus Allium. It is native to the Mediterranean Basin.

The three-cornered leek has a strong garlic-like odor and flavor, and is used as a seasoning in many dishes. It is also a common ingredient in many commercial garlic-flavored products.

Roots. Tigernut is a small root vegetable that is native to Africa and parts of Asia. It is also known as earth almond, groundnut, and wild ginger. Tigernut has a sweet, nutty flavor and can be used in a variety of dishes.

Fruits. Tindora (Coccinia grandis) is also known as scarlet gourd, kowai fruit or ivy gourd. The tropical vine grows in tropical climates, and is popular in Indian, Thai and Malaysian cuisines. Tindora have a crunchy texture and can be eaten cooked or raw. Although it is botanically a fruit, it is cooked like a vegetable. Try it in this Tindora Stir Fry.

Fruits. Tomaccio tomatoes are small and round, with a deep red color. They are a type of cherry tomato and have been bred to be good for drying. They have a sweet flavor, and are often used in salads or as a garnish.

Fruits. Tomatillos (Physalis philadelphica), are a nightshade plant that originated in Mexico. The small, spherical green/purple or green fruits have a dry leafy husk (similar to physalis). Although the name tomatillo translates to ‘little tomato’, they aren’t young tomatoes. Tomatillos aren’t as sweet as tomatoes and have a more acidic flavor. a staple of Mexican cuisine. Discard the husks, then they can be eaten raw or cooked and are commonly used in salsa verde.

Fruits. Tomatoes are a savory fruit that is often mistaken to be vegetables. Botanically they’re a fruit, but in culinary terms they’re a vegetable (see above for clarification between classifications). There are many varieties, shapes, sizes, and colors, from cherry and grape tomatoes to Roma and beefsteak. They can be enjoyed raw or cooked, in many dishes from salads and drinks to curries and condiments. Try them in Tomato Soup or Homemade Ketchup.

Roots and tubers. Topinambur, also known as Jerusalem artichoke, is a root vegetable that is native to North America.

It is a member of the sunflower family and its scientific name is Helianthus tuberosus.

The plant grows to a height of 3-5 feet and has large, dark green leaves. The root is white with a reddish hue and has a nutty flavor. Topinambur can be eaten raw, cooked, or roasted. It is a good source of fiber and vitamins A, C, and K. Try it in Jerusalem Artichoke Soup.

Fruits. The Trinidad Moruga Scorpion Pepper is a chili pepper that is native to the Moruga village in Trinidad and Tobago.

Fruits. Turban squash is a type of winter squash that is characterized by its turban-like shape. It has a thick, hard shell that is difficult to cut through, but the flesh inside is soft and flavorful.

This squash is typically harvested in the fall, but it can be stored for months if properly cured.

Roots. Turmeric is a small orange-yellow root that is used dried and ground, or freshly grated, particularly in the Indian subcontinent and Southeast Asia. Be careful if using fresh, as it is a natural dye and will stain clothes, hands, and surfaces.

Turmeric has a strong, earthy flavor. It is used as a spice in curries, and also for its reputed health benefits. Turmeric also gives a strong yellow color to dishes. Try it in Golden Milk, Turmeric Rice, or Turmeric Bread.

Roots. Turnips are  root vegetables in the cabbage family. They have a skin that ranges from white to purple or red, and a white flesh inside. Smaller turnips are sweeter, and more mature turnips in winter have  a stronger, pepperier taste.Turnip leaves are edible and can be boiled, steamed or added to stews.

Leaves. Tuscan Kale (aka lacinto kale, cavolo nero, dinosaur kale or black kale) is Italian kale with long, thin dark leaves. It can be boiled- steamed or eaten raw. Native to Tuscany, it's famously used in ribollita, as well as zuppa toscano. You could even use it to make bright green cavolo nero cupcakes or a cavolo nero Christmas pudding.

That's it! I hope you've found this list of 22 'Vegetables starting with T' useful. If any are missing, let us know in the comments and we'll add them.