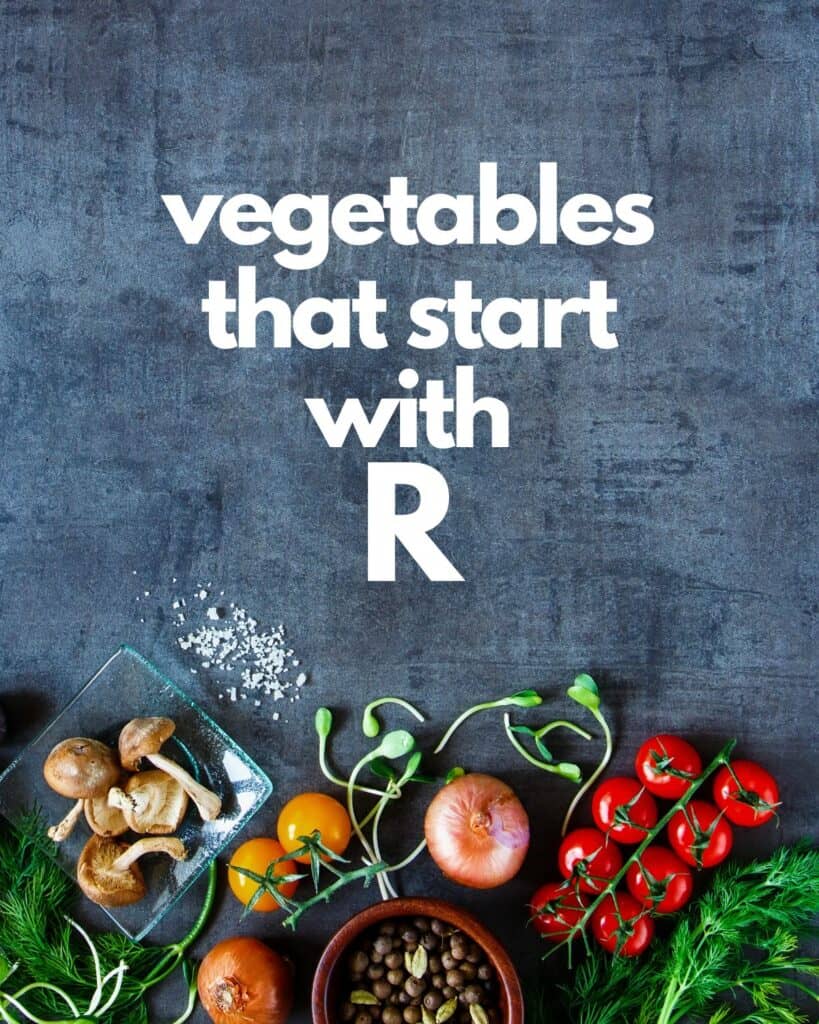 If you're wondering which are the vegetables that start with R, we've got them all here, from Radicchio to Rutabaga. Here are not only the 21 veggies beginning with the letter R in this list, but we'll also give you info, classifications, recipes, pictures, and more.

Our selection of veggies beginning with the letter R has all the ones we know. If you know of any more, let us know in the comments!

A few notes before we launch into the list of vegetables that start with the letter R.

NOTE: This vegetables that start with the letter R list was made with culinary vegetables listed.

Here is the list of 21 veggies starting with the letter R!

Leaves. Radicchio is an Italian leaf vegetable, closely related to chicory. It has distinctive red leaves with a white stem that grows in a shape similar to cabbage. Radicchio has a bitter taste that adds depth of flavour to salads. The flavor is mellowed if it is sauteed, grilled or roasted.

Roots. Radishes, (Raphanus sativus), is an herbaceous annual or biennial plant in the Brassicaceae family. The round root is usually bright pink, with a bright white interior. All parts of radishes are edible: the bulbs, seeds, and leaves. Enjoy them raw in a salad, or raw with butter and salt as they do in France. They can also be roasted, which mellows the flavor. Try Roasted Radish Tart or Roasted Radishes and Asparagus side dish.

Ramps, Allium tricoccum, are a wild spring onion. They are also known as wild leeks. They taste a bit like a cross between a leek and a shallot. Ramps can be found in Farmer's Markets in the spring or foraged at higher altitudes. Try them raw, sautéed, roasted, grilled, or pickled. They're also wonderful whizzed into ramps pesto.

Leaves & Stems. Ramsons are a kind of wild garlic. They have a strong garlic flavor and are often used in cooked dishes.

Other names for ramsons include: allium ursinum, bear garlic, and wild garlic.

Ramsons have long, narrow leaves that are green on the top and white on the bottom. The leaves grow in a rosette around a central stem. Ramsons also have small, white flowers that bloom in the spring. Try it in Ramson Pesto.

Leaves, Stems and Flowers. Rapini (or broccoli rabe) is a green cruciferous vegetable. It looks similar to broccoli, but with long thin stems and it doesn't form a large head. The leaves, buds, and stems are all edible and have a slightly bitter taste. Try Sauteed Rapini.

Leaves. Red Cabbages are leafy brassicas that are round with red/purple leaves. They're a winter cabbage and can be eaten raw or cooked. Try it thinly sliced into coleslaw or salad. They can be boiled, steamed, sauteed. Try it in braised red cabbage or cabbage salad.

Fruits. Red kuri squash, also known as onion squash or hokkaido squash), is a winter squash (in season from October to December) that is often used in dishes like soup or ravioli.

It has reddish-orange skin and creamy, orange flesh. This squash has a sweet flavor, almost like pumpkin but is a bit milder. It can be found at most grocery stores and is often located near the other winter squashes like butternut and acorn. Try it in Red Kuri Squash Salad.

Roots & Tubers. This incredibly popular root vegetable is a member of the nightshade family, Solanaceae. Originally native to The Americas, they are now a staple crop around the world. There are over 4,000 varieties of potatoes. Red potatoes have a thin red skin and pale flesh. Find out more about Types of Potatoes.

Leaves. Gongura (also known as gongura, Ambada, Pitwaa, or Pulicha Keerai) are medium-sized broad, flat, green leaves with a sour, tart taste. Popular in India, they are often served pickled, steamed, or ground into a paste to make chutney. It is one of the main ingredients in authentic Andhra cuisine.

Roots. Lotus root (also called Renkon) is a vegetable that comes from the root of the aquatic lotus flower. It's popular in many Asian cuisines and has a mild celery-like taste and dense texture. When sliced it has a distinctive design with patterns of small holes. Enjoy lotus root stir-fried, steamed or added to soups.
Try it in Kung Pao Lotus Root.
Tip: Lotus root browns quickly, so after peeling and slicing, keep it in a bowl of water with a squeeze of lemon juice until ready to use.

Stems. Although it's normally treated as a fruit, botanically, rhubarb is a vegetable. The long thick colourful stems can be eaten raw, but they are very bitter so are best cooked with sugar. This makes them perfect for rhubarb compote, crumbles or crisp, or stewed and used to top ice cream or yougurt. The leaves are not edible.

Leaves. Also known as Arugula or Rocca, rocket is a peppery tasting leafy vegetable that is part of the Brassicaceae or mustard family. It is popular in salads and on pizza as it has a fresh peppery flavor. Try it in this rocca salad.

Leaves. Also known as cos lettuce, Romaine is a leafy vegetable commonly used in salads, particularly Caesar Salad. The large leaves can also be cooked, so try cutting the romaine heads into quarters, brushing with oil, and grilling them. Vegan Grilled Caesar Salad.

Flowers. Romanesco has a distinctive look with a yellow/green colour and florets that grow in geometric fractals. It has a delicate, slightly nutty flavor. Romanesco is also known as broccoli, Romanesque cauliflower, fractal broccoli, green cauliflower, or Roman cauliflower.

Romanesco is a Brassica (cruciferous vegetables) and can be eaten raw or cooked and can be steamed, roasted, boiled, or stir-fried, like cauliflower. If yours comes with the leaves attached, you can wash them and cook them like kale.

Try it in this Roasted Romanesco Salad or even in Romanesco Cookies.

Fruits. Rossa Bianca Eggplant is also known as aubergine. It has a rounder shape than regular eggplant and has a purple and white streaked color, with a spongy pale interior. Botanically a fruit or berry, eggplant is part of the nightshade family. Enjoy it in moussaka, roasted eggplant wedges, or cheesy baked eggplant.

Seeds and Pods. Runner Beans (Phaseolus coccineus) are a legume that grow as a large flat, long green pod.

The pods are edible, though as they mature they get tougher and stringier, though it is mainly just the British who eat the pods, and most other countries just eat the seeds. The seeds are eaten fresh or dried.

Roots & Tubers. Russian Blue Potatoes have a blue skin and dark purple skin, with a round to oblong shape. They are a waxy potato and are great for salads, boiling, steaming, and baking.

Roots. Rutabaga is a root vegetable that's also called swede, neep (Scotland), Swedish turnip, and turnip (though not the same as a regular turnip). It has a round shape and green/purple skin, while the flesh is yellowy-orange.

Rutabaga has a sweet, nutty, earthy flavour. It can be roasted, boiled, steamed, sauteed or added to soups and stews. Try rutabaga in rutabaga mash, roasted rutabaga or in the classic Finnish Christmas casserole Lanttulaatikko. Its sweetness means you could even try it in vegetable desserts! Try this Rutabaga Nutmeg Cake.

That's it! I hope you've found this list of 21 'Vegetables starting with R' useful. If any are missing, let us know in the comments and we'll add them.