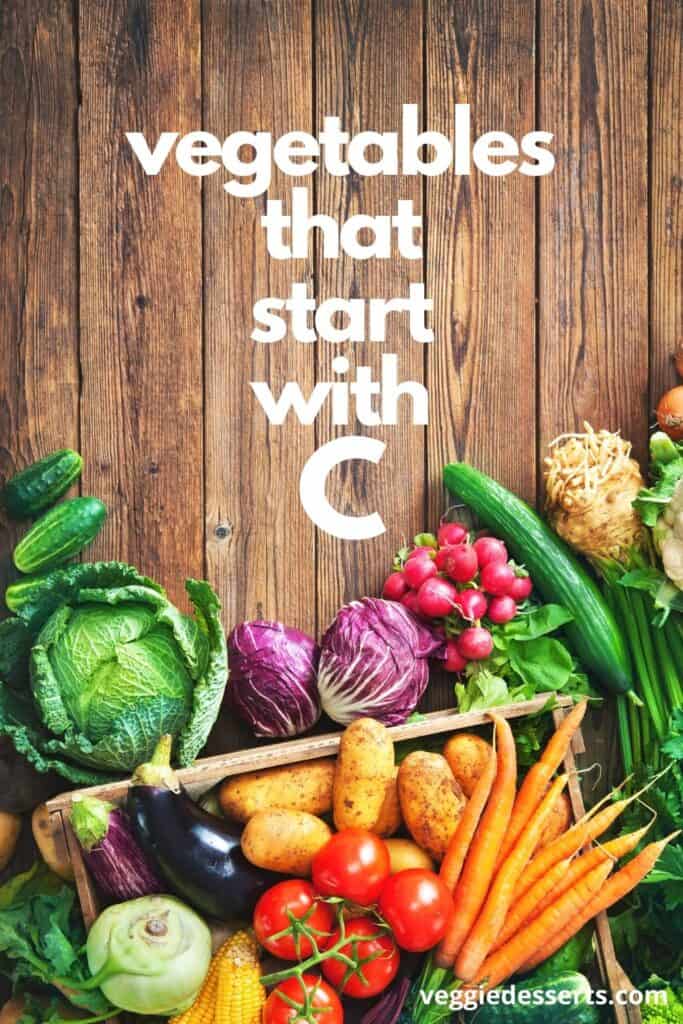 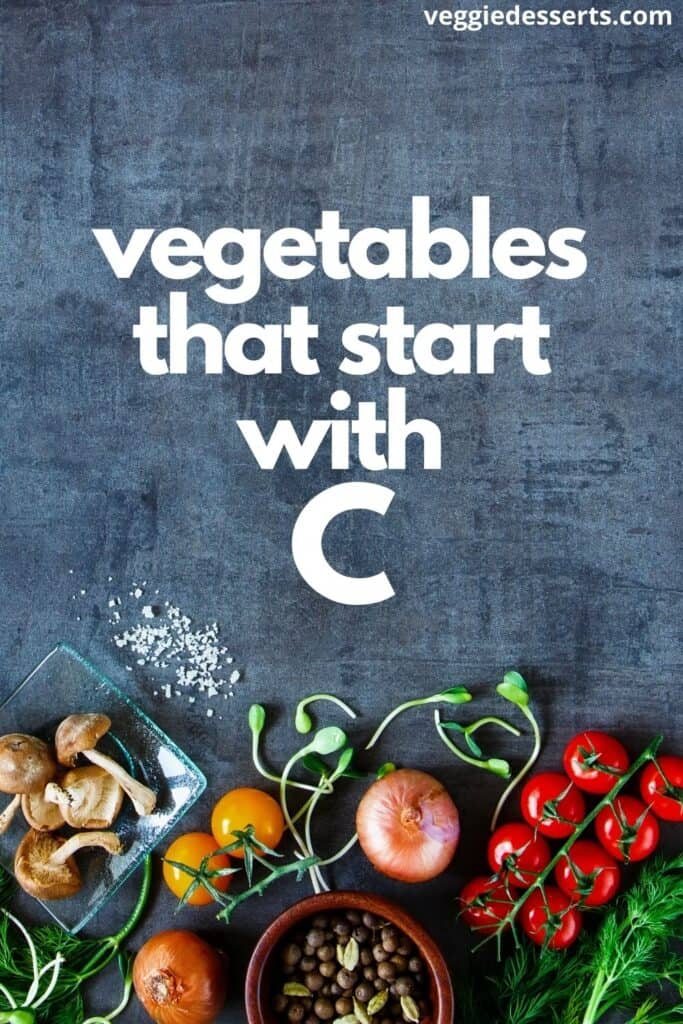 If you're looking for a list of vegetables that start with C, then you've come to the right place!

Maybe you need to know which veg starts with a C for a school project, or perhaps you're just curious! Well, here they are.

We've gathered all the veggies that begin with the letter C and listed them right here for you. There are 22 of them!

So, if you've been scratching your head to figure out all the C veggies, then look no further.

If you know of any other C vegetables, then let us know in the comments and we can add them in.

A few notes before we launch into the list of vegetables that start with C.

Culinary Vegetables: These are edible plants and plant parts that are considered veggies for cooking purposes. They are usually savory or are put into savory dishes. This includes pumpkins, eggplant, tomatoes and bell peppers, which are, botanically speaking, fruits. This list of 'C' vegetable names will focus on culinary veggies.

This vegetables that start with C list was made with culinary vegetables listed.

Here is the list of 22 veggies starting with the letter C!

More info about the vegetables

Leaves. Cabbages are leafy green brassicas that come in a variety of shapes, sizes and colors. From pointed napa cabbage to wrinkled savoy cabbage, there are plenty of nutritious types to choose from. It can be boiled, steamed, sauteed and added to soups, stews and curries. You're going to love using it in cabbage soup, braised red cabbage or cabbage salad.

Cabbage is a cruciferous vegetable.

Flowers. Calabrese is a type of broccoli that has a slightly larger flowering head. They have a blue-green head and grow about 5" across. Try using it in Broccoli Salad. Broccoli is a cruciferous vegetable.

Flowers. Capers are small unripened flower buds that are dried and then preserved in brine. They have a tangy flavor, like a lemony olive. Capers are used as a seasoning or condiment, added to dishes for a burst of flavor. Use them in tartar sauce or caponata alla siciliana.

Fruits. Also known as bell peppers or sweet peppers, capsicum are a fruit that can be found typically in green, yellow, orange and red and served savoury. Green peppers are more bitter, and they increase in sweetness with red being the sweetest. Try them in Italian stuffed capsicum.

Stems. Cardoons are the edible stems of a thistle-like plant. They're popular across the Mediterranean and North Africa. They look like giant celery stems and need to be cooked before eating. Use gloves when preparing cardoons as they can be spiky. How to prepare cardoons.

Roots & Leaves. Carrots are nutritious root vegetables that can be eaten raw or cooked. They are usually orange, but some varieties can be red, purple, white or black. The leafy green tops are also edible. Carrots can be steamed, boiled, roasted, or used as an ingredient in soups, stews and many other dishes. Try carrot cupcakes, carrot curry or carrot hummus.

Roots. Cassava, also known as Manioc, Yuca or Yucan Root, is a starchy root vegetable or tuber with a mild, nutty flavor. It's popular in the Caribbean and across Latin America. Enjoy it mashed, turned into chips or fries, or baked into bread or cake. Try this cassava cake.

Cauliflower can be boiled, roasted, steamed or added to dishes.

Leaves. Cavolo Nero (aka dinosaur kale, lacinto kale or black kale) is Italian kale with long, thin dark leaves. It can be boiled- steamed or eaten raw. Native to Tuscany, it's famously used in ribollita, as well as zuppa toscano. You could even use it to make bright green cavolo nero cupcakes or a cavolo nero Christmas pudding.

Roots. Also known as celery root, celeriac (pronounced sell-air-ee-ack) is another vegetable that starts with C. It is a knobbly round winter root vegetable with a mild celery taste. It can be mashed, roasted or used in soups and stews. The tough outer skin needs to be cut away or peeled as the folds and roots can hide soil.

Tip: Once cut, celeriac's white flesh can quickly discolor. Place it into a bowl of water with a big squeeze of lemon juice to stop it from turning brown.
Try it in celeriac soup, celeriac remoulade or even celeriac apple cake!

Stems. Celery grows as a group of long, thick, watery stalks that get smaller around the center. It can range from white to green and has a slightly bitter taste. The texture is crisp and juicy when eaten raw, but softens when cooked. It forms a central part of a mirepoix (France) or soffrito (Italy, Spain and Latin America) - sauteed onion, carrot and celery that forms the aromatic cooking base of many dishes, such as soups, stews, casseroles and sauces.

Try it in the classic Ants on a Log kids snack, with stalks of celery spread with peanut butter and dotted with raisins. It's also great in celery and blue cheese soup.

Leaves. The edible leaves of the Thai Acacia Tree, these bitter, nutty-tasting leaves are popular in soups, curries, stir-fries, and omelets in Laos and Thailand. Try it in this Cha Om Omelette.

Leaves. Chard is a leafy green vegetable that grows from an inedible root. Swiss Chard is known for its bright rainbow-colored stems, while other varieties have white or green stems. Young chard leaves and stems can be eaten raw in salads, while larger chard can be used in stir-fries, soups, stews, casseroles or sauteéd as a side dish. Cook it like kale or collard greens. Try it in these creative swiss chard recipes.

Tip: The stems and leaves of chard cook at different times, so for many dishes you'll need to chop the stems and add them to the cooking pot a little sooner.

Leaves. Also known as endive, chicory is a cluster of white leaves with yellow or red tips. The crisp leaves are mildly bitter and are usually used to add a deeper flavor to salads. Chicory is a forced crop, meaning it is grown in complete darkness, which results in its pale color. It's usually served raw in a salad, but can also be grilled or broiled.

Fruits. Chili peppers (also known as chile or chilli peppers) are the fruit of plants from the genus Capsicum and they are members of the nightshade family, Solanaceae. Chili peppers are used in cuisines all over the world to make dishes hot and spicy. There are many varieties that vary in heat. The intensity of the hotness of chili peppers is commonly graded in Scoville Heat Units (SHU). There are many claims to hottest chili pepper, but the hottest according to the Guinness World Records is the Carolina Reaper.
The first cultivated chili peppers have been traced back to Mexico, 6,000 years ago.
Try it in Xnipec Habanero Salsa.

Fruits. Chayote is a gourd that is also known as choyo, mirliton, choko, tayota, chocho, and chuchu. This summer squash has a mild taste, similar to cucumber or zucchini. Chayote can be peeled or unpeeled and eated raw or cooked. Though it is usually cooked, similar to butternut or pumpkin. Although it is usually the pear-shaped green wrinkly fruit that is eaten, the root, stem, tubers, seeds and leaves are all edible too. It can be fried, boiled, stuffed, mashed, baked, or pickled. Try it in a chayote side dish with vinegar and chili flakes.

Leaves. Choy sum (aka Choi sum) is a leafy vegetable that's popular in Chinese cuisine. It is a member of the genus Brassica of the mustard family, Brassicaceae. Also known as Chinese flowering cabbage, it's widely used in Cantonese cooking, as well as throughout Asia and the west. Use Choy sum raw in salads, stir-fried, cooked into dishes or steamed as a side dish. Try Stir-Fried Choy Sum with Minced Garlic.

Leaves. Also known as turnip greens or broccoli di rapa, cime de rapa is the leafy tops of broccoli rabe and has a strong, bitter taste. The leafy green vegetable is a brassica in the mustard family and is popular in Italy.
Try cime de rapa wilted in a pan with oil, garlic, and chilli. It's used in this classic Italian dish from Puglia: Orecchiette con le Cime di Rapa.

Leaves. Collard greens are large leaves with a tougher stem that are popular in Southern cuisine. They're from the cabbage family and taste similar to cabbage, chard or kale. The leaves are slightly tough, so they're great to use as a healthier substitute for bread or wraps. Try these quinoa and sweet potato collard wraps.

Fruits, grains and vegetables. You may be wondering, is corn a vegetable? Well, there isn't a straight answer. The ears of corn are classified as a fruit since it grows from the seed/ovary of a corn plant. But it's also a grain because each kernel is a caryopsis (a dry one-seeded fruit in which the ovary wall is united with the seed coat). So, botanically, corn is both a fruit and a grain However, corn is also a culinary vegetable in the sense that it's served up for dinner. Try it in mini elote (Mexican street corn) or as a sweet dish with coconut in this Vietnamese che bap.

Fruits. Next up in this list of vegetables that start with C is the Courgette, which is also known as zucchini. These summer squashes are oblong in shape and are green, yellow or striped.

Courgette is the young fruit, and older ones are tougher and called marrow. It comes from the same family as cucumber, melon and squash.

The skin is edible and they can be eaten raw, fried, roasted or grilled. They have a high water content, so aren't great boiled as they'll fall apart. The mild flavor lends itself well to sweet dishes as well as savory. Try lemon courgette cake, courgette fritters or courgette soup.

Fruits. Cucumbers are fruit that grows on a creeping vine. They're green, with an elongated shape, pale flesh and the watery insides have soft edible white seeds. Cucumbers are 95% water.
They originated in South Asia, but are now widely grown around the world.

That's it! I hope you've found this list of 'Vegetables that start with C' useful. If any are missing, let us know in the comments and we'll add them in.