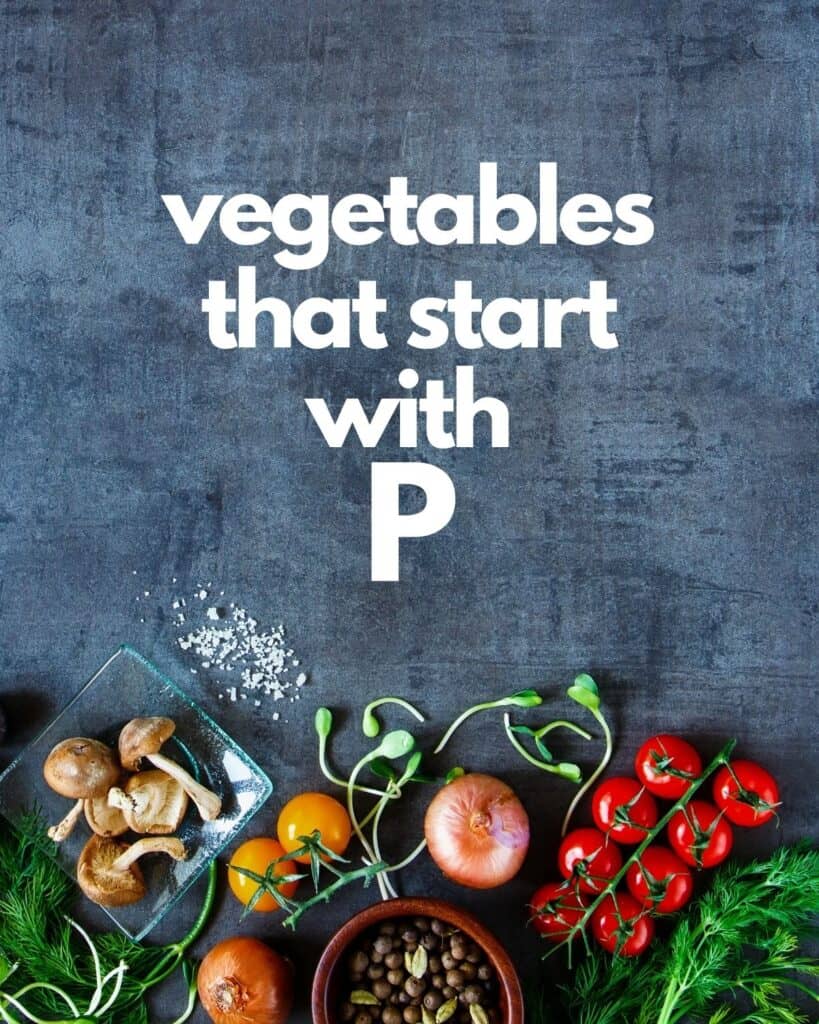 Wondering which are the vegetables that start with P, we've got them all right here for you in a handy list, from Pak Choi to Purslane. Here are not only the 23 veggies beginning with the letter P, but we'll also give you info, classifications, recipes, pictures, and more.

You're here because you're wondering which vegetables start with the letter P! Well, here they all are listed for you.

Our selection of veggies beginning with the letter P has all the ones we know. If you know of any more, let us know in the comments!

A few notes before we launch into the list of vegetables that start with the letter P.

NOTE: This vegetables that start with the letter P list was made with culinary vegetables listed.

Here is the list of 23 veggies starting with the letter P!

The leaves are used in many dishes, from rice to desserts, where their delicate perfume flavor infuses the food. Crushed leaves also color food a natural green. Try Pandan Chiffon Cake which has pandan paste.

Roots. Parsnips (Pastinaca sativa) are long, pale roots with a delicately nutty flavor that are closely related to carrots. They have pale skin and flesh. Parsnips harvested after the final winter frosts have a sweeter taste. Their sweetness lends them to be used not only in savory dishes but also in sweet ones. They make a great alternative to carrots in carrot cake.

Fun Fact: The Romans used parsnips as a sweetener before they cultivated sugar beets and cane sugar. Emperor Tiberius even accepted parsnips as payment from the Germans.

Seeds. Botanically, most nuts are seeds, while some true nuts such as chestnuts, acorns, and hazelnuts, are fruits. However, peanuts are legumes, so are technically vegetables. Try them in a West African Peanut Stew or a vegan Thai Noodle Salad with Peanut Sauce.

Seeds & pods. Peas (Pisum sativum) grow with small edible orbs inside an edible pod. Although peas are treated as a vegetable for cooking, botanically, they're a fruit. Peas are usually bought frozen, but also fresh or dried (as split peas). Frozen peas tend to have more nutrients than fresh since the goodness is 'locked in' when they are frozen immediately after harvesting. As a side dish, peas can be boiled or steamed for a few minutes.

Bulbs. Pearl Onions, also known as silverskin or creamers, are very small onions (about ½-inch in diameter), closely related to leeks. They're often used in stews, soups, and meat dishes, or pickled. Try them sauteed with a balsamic glaze as a side dish.

Fruits. Also known as sweet peppers, bell peppers or capsicum. Peppers are a fruit that can be found typically in green, yellow, orange and red. Green peppers are the most bitter, and they increase in sweetness with red being the sweetest and also having the most phytonutrients. Try them in vegan stuffed peppers.

Fruits. Pickles are pickled cucumbers (also known as gherkins or dill pickles). The name gherkin is common in the United Kingdom. Pickles are made with young cucumbers, which are fruit that grows on a creeping vine. They're green, with an elongated shape, pale flesh and the watery insides have soft edible white seeds. Try them in Dill Pickle Pasta Salad.

Seeds & pods. Pigeon Peas (Cajanus cajan) are also known as tur dahl, arhar, red gram, or gungo peas. They're legumes from the family: Fabaceae. Pigeon Peas are popular in Asia, Latin America, and Africa. They are a major source of protein for the people of the Indian subcontinent. They can be bought as dried peas, flour, or green peas. Pigeon peas are often served with rice or flatbreads, cooked into daals, soups, or stews.

Seeds & pods. Pinto Beans, a type of common bean (Phaseolus vulgaris), are a legume. They are a staple in Latin American cuisine. When dry, the small beans have a brown speckled exterior, however, when cooked, they are a solid brownish pink color. They are often used cooked whole in dishes, mashed, in burritos, or as refried beans. Try them in homemade refried beans or cooked as a Mexican Pinto Beans side dish.

Leaves. Pitwaa (also known as Red Sorrel, Ambada, Gongura, or Pulicha Keerai) are medium-sized broad, flat, green leaves with a sour, tart taste. Popular in India, they are often served pickled, steamed, or ground into a paste to make chutney. It is one of the main ingredients in authentic Andhra cuisine.

Fruit. Plum Tomatoes (also known as Roma or San Maranzo) have a longer, more cylindrical shape than regular tomatoes, and have less seeds. They're often found caned, or used to make sauces and paste/puree. Use them like any other tomatoes or try them in Tomato Soup, Homemade Ketchup, or Spanish Beans.

Leaves. Pointed cabbages (also called hispi cabbage) are leafy green brassicas with closely packed pale green colour and one end that tapers slightly to a point. They have a mild flavor and soft texture. Pointed cabbage can be eaten raw or cooked. Due to their close texture, they can be cut into wedges and grilled. They can also be eaten in salads or boiled, steamed, sauteed, or added to soups. Try it in Cabbage Soup or Roasted Pointed Cabbage.

Roots & Tubers. This incredibly popular root vegetable is a member of the nightshade family, Solanaceae. Originally native to The Americas, they are now a staple crop around the world. There are over 4,000 varieties of potatoes, including Yukon Gold, Maris Piper, Fingerling, King Edward. They can be grouped into russet potatoes (which have a rough brown skin), white potatoes, red potatoes, purple potatoes, and yellow potatoes. Potatoes are best consumed cooked, since they have compounds that, when eaten raw, can cause digestive issues. Try them in Garlic Mashed Potatoes, Hasselback Potatoes, Bombay Potatoes, Colcannon, Mini Baked Potatoes, and many other ways.

Leaves. Prickly Pear (also called nopales) are a type of cactus that is commonly eaten in Mexico.

The pads of the cactus are harvested and used in a variety of dishes, including salads, stews, and tacos. Prickly Pear have a slightly tart and salty flavor and a slightly chewy texture. They can be found in grocery stores, fresh, frozen or canned.

Fruit. Pumpkins are winter squash from the genus Cucurbita. Famously used for carving into a Jack o'Lantern at Halloween, the skin, flesh, and seeds are all edible. You can often find cooked and pureed pumpkin in cans for use in sweet and savory recipes.

Stems, Flowers, Leaves. Purple Sprouting Broccoli has long thin stems and small purple flowers at the head, similar to broccolini/tenderstem. The flowers, stems, and leaves are all edible, though you should cut off and discard any tough woody ends of the stems. Try it raw, steamed, boiled, or roasted.

Roots & Tubers. Purple Sweet Potatoes (also called Okinawan sweet potatoes or Hawaiian Sweet Potatoes) are a root vegetable with a distinctive dark purple skin and bright purple flesh. Their sweet taste and purple color lends them to be used in many dishes, so try them mashed, baked, boiled or steamed.

Leaves. Purslane (Portulaca oleracea) is also known as duckweed or fatweed. It is a leafy green vegetable, popular in Mediterranean countries, that can be eaten cooked or raw in salads. Purslane tastes a bit like a bitter apple with green beans. Find purslane at Farmer's Markets or foraged in the wild during the summer. Wild Purslane Salad.

Stems. Purple asparagus is a stem vegetable that grows as a long, pointy spear that is purple (though the most common varieties are usually green). Enjoy pruple asparagus sauteed, grilled, steamed or roasted. Try roasted asparagus or sweet potato asparagus frittata.

That's it! I hope you've found this list of 23 'Vegetables starting with P' useful. If any are missing, let us know in the comments and we'll add them.