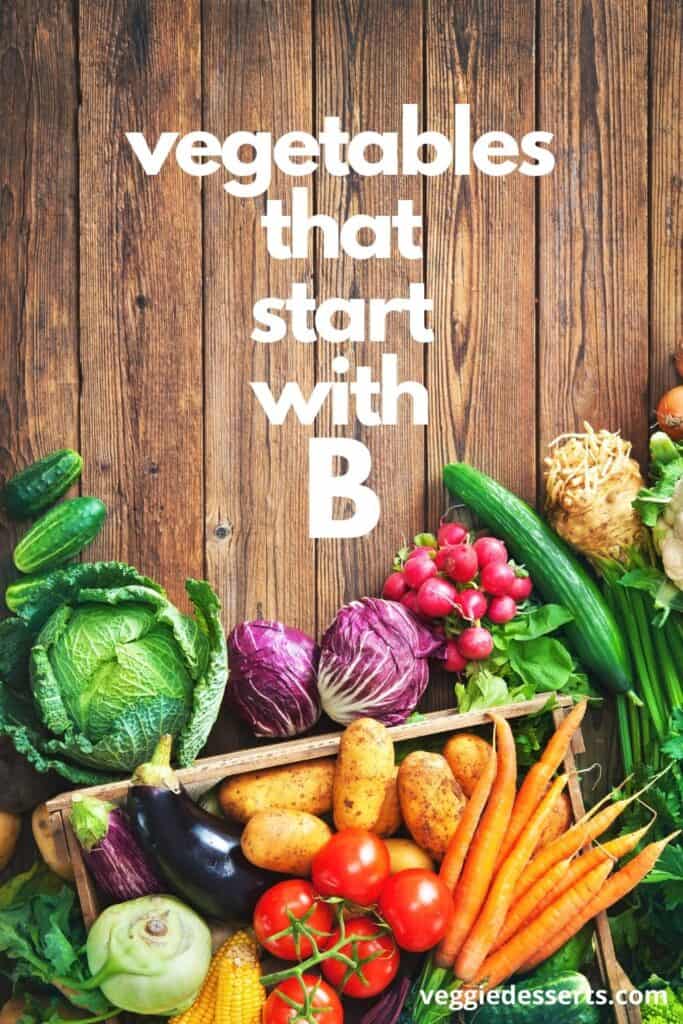 If you're looking for a list of vegetables that start with B, then you've come to the right place!

Maybe you need to know which veg starts with a B for a school project, or perhaps you're just curious! Well, here they are.

We've gathered all the veggies that begin with the letter B and listed them right here for you. There are 20 of them!

So, if you've been scratching your head to figure out all the B veggies, then look no further.

If you know of any other B vegetables, then let us know in the comments and we can add them in.

A few notes before we launch into the list of vegetables that start with B.

Culinary Vegetables: These are edible plants and plant parts that are considered veggies for cooking purposes. They are usually savory or are put into savory dishes. This includes pumpkins, eggplant, tomatoes and bell peppers, which are, botanically speaking, fruits. This list of 'B' vegetable names will focus on culinary veggies.

This vegetables that start with B list was made with culinary vegetables listed.

Vegetables beginning with B

Here is the list of 12 veggies starting with the letter B!

More information about the Vegetables

Fruits. Banana Squash is a large winter squash. It has an elongated banana-like shape, with pale blue, pink, or orange skin, and bright orange flesh.

They can grow to 2-3 feet long, with a diameter of about 6 inches. These huge squashes have a mild, sweet, nutty flavor, similar to butternut squash, and can be used in many dishes.

Try it roasted, steamed, baked, boiled, or used in dishes. Find out how to cook banana squash.

Legumes. Beans are classified as a legume because they are the seeds of flowering plants in the Fabacea family.

Typically, beans grow in pods with multiple beans inside. Other types of legumes are peanuts, lentils, and peas. There are many varieties of beans and they're popular around the world. Types of beans include kidney beans, pinto beans, navy beans, and great northern beans.

Are beans vegetables or legumes?

Legumes: Beans are legumes, which is a classification of vegetables that have edible seeds inside of a pod. They include beans, lentils, peas, and peanuts.

Seeds & Pods, fruits. Green beans are also known as French beans, string beans, snap beans and haricot vert. Many are eaten with their pods, though others are shelled and the seeds inside are eaten. They can be roasted, steamed, boiled and sauteed.

Try cooking finely chopped onion and garlic in a pan, then add bean sprouts and a dash of soy sauce and briefly saute as a tasty side dish.

Roots, leaves and stems. Beets are a root vegetable, but you can also eat their leaves (beet greens) and stems if you're lucky enough to find fresh ones with the tops still attached. Most commonly found in a dark purple color, you can also find them golden yellow and striped (called candy cane or chioggia beets). They can be eaten in many ways, and can add a great natural purple color to dishes.

Fruits. Also known as capsicum, peppers or sweet peppers, Bell Peppers are a fruit that can be found typically in green, yellow, orange and red. Green peppers are the most bitter, and they increase in sweetness with red being the sweetest and also having the most phytonutrients.

Try them in vegan stuffed peppers. Botanically speaking, bell peppers are fruit, but in culinary terms, they are considered vegetables.

Seeds & Pods. Black beans (also called Black Turtle Beans) are small black-colored beans with a smooth texture and mild taste. They are popularly used in Mexican and Brazilian cuisine, as well as Cajun and Creole recipes.

Try them in soups, chillis, stews, casseroles, and tacos. Check out this list of Black Bean Recipes.

Seeds & Pods. Black-Eyed Peas are a popular Southern staple in many dishes, where they're considered to be good luck when eaten on New Year's Day. Don't be fooled by their name, they are beans, not peas. These small beige beans have a black spot, which lends to the name 'black-eyed peas'. You'll love their mild earthy flavor and a creamy texture.

Use them in soups, stews, casseroles, etc... Try them in these Southern Black Eyed Peas.

Flowers. Broccoli is a brassica or cruciferous vegetable from the cabbage family. Its large flowering head, as well as the stalk and small leaves, are all edible. The popular vegetable can be enjoyed in many dishes, from soups and stews to side dishes. Try this broccoli salad.

Flowers. Also known as tenderstem, broccolini is sweeter than broccoli and has thinner long edible stems. The entire broccolini vegetable (leaves, young stems, shoots, and flowers) are edible. Add it to stir-fries, soups, or serve as a side dish, grilled, steamed or roasted. Try it in this tenderstem and mushroom one pot pasta.

Flowers. Broccoli Rabe (also called rapini or rapa) is similiar to broccolini, but is leafier with thin stems and small florets that are sparser than the florets on regular broccoli. It is a dark green vegetable in the turnip family. It's popular in Italian cooking.

Flowers. Broccoflower (also known as romanesco, romanesque cauliflower, fractal broccoli, green cauliflower, or roman cauliflower) has a distinctive look with a yellow/green colour and florets that grow in geometric fractals. It has a delicate, slightly nutty flavor.

Broccoflower is a Brassica (cruciferous vegetables) and can be eaten raw or cooked and can be steamed, roasted, boiled, or stir-fried, like cauliflower. If yours comes with the leaves attached, you can wash them and cook them like kale.

Try it in this Roasted Romanesco Salad or even in Romanesco Cookies.

Leaves. Bok choi (also known as bok choy or pak choi) is an Asian leafy green vegetable and a type of Chinese cabbage. It is a member of the brassica or cruciferous family. The dark green leaves grows from small clusters of short pale white stems. Use it in salads, soups, stir-fries and fillings for spring rolls, dumplings and potstickers.

Seeds & pods, fruits. Broad beans (also known as fava beans) are a legume in the pea and bean family. The large beans grow inside large pods that are discarded after shelling unless picked very young. How to cook broad beans.

Check out this in-depth guide to Broad Beans, including information, prep, storage, and recipes.

Leaves. Brussels Sprouts are a nutritious cruciferous vegetable. They look like tiny cabbages and are edible buds that grow on a tall stalk. They can taste very sulfurous and bitter if overcooked, so try roasted balsamic Brussels sprouts as a tasty side dish. You'll also love Roasted Frozen Brussels Sprouts and Creamy Brussels Sprout Pasta.

Fun fact: Brussels sprouts are named after the Belgian city they were cultivated in during the 16th Century. They're still very popular in Brussels to this day.

Fruits. Buttercup Squash, are round and dark green, with a flat top and orange flesh. They have a sweet taste and dry texture. Find the winter squash at farmer's markets from fall through winter.

Try baking them with fillings, such as in this Baked Buttercup Squash with Apples.

Fruits. Butternut squash (aka butternut pumpkin or gamma) is a versatile squash has a long neck and bulbous end where the seeds are. It is a winter squash and grows on a vine. The thin peel can be eaten and left on when cooked if desired. Try it in stuffed butternut squash or chocolate squash cake.

That's it! I hope you've found this list of 'Vegetables that start with B' useful. If any are missing, let us know in the comments and we'll add them in.