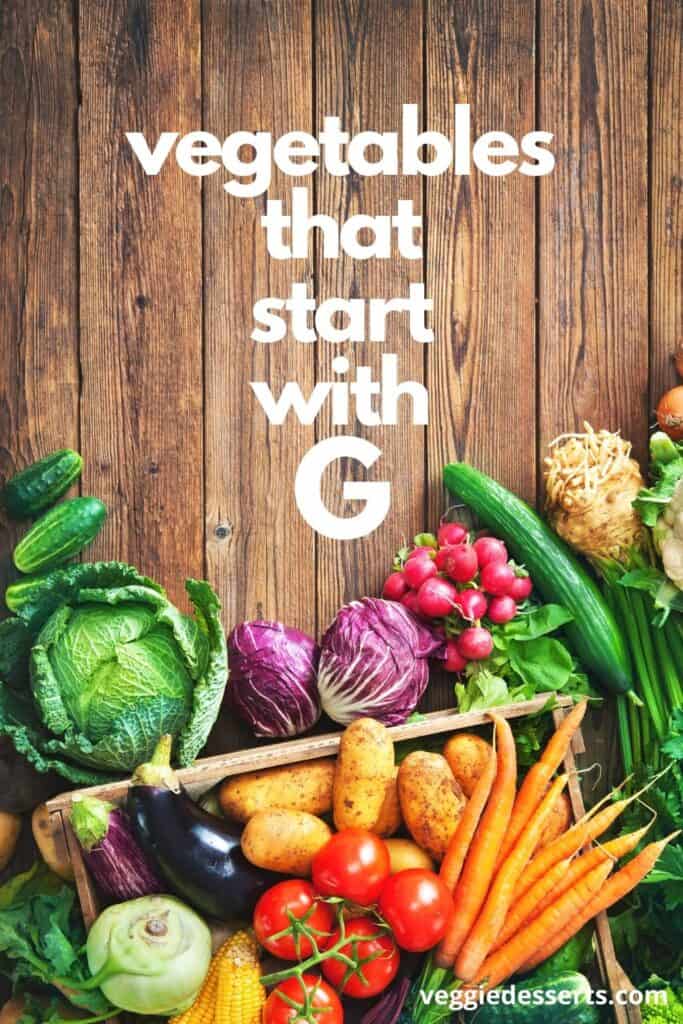 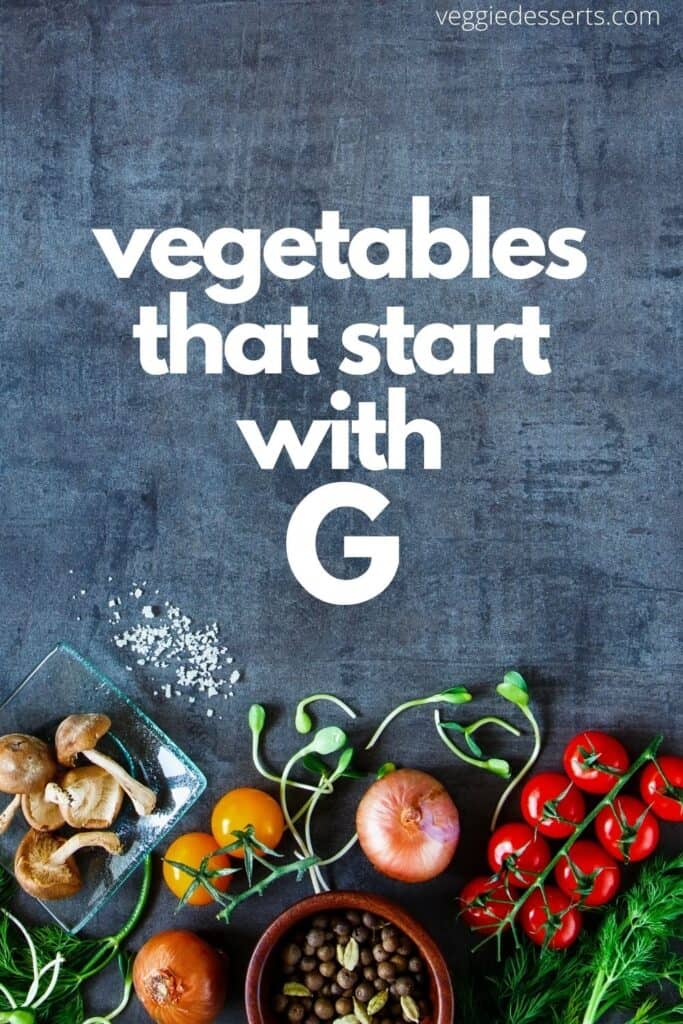 If you're looking for a list of vegetables that start with G, then we've got them right here for you, all 14 of them!

You might be wondering about them for a school project, quiz, or if you're just curious. Well, here ya go!

We've gathered all the veggies starting with the letter G and listed them right here for you.

If you know of any other G vegetables, then let us know in the comments and we can add them to this epic list.

Please note that this vegetables that start with G list was made with culinary vegetables listed.

Here is the list of 14 veggies starting with the letter G!

Roots. Galangal is a root vegetable that's also known as Thai ginger and is popular in Southeast Asian cooking. It looks very similar to ginger but has a citrusy, woody flavor. It can't be grated and needs to be peeled and sliced. Try it in Thai galangal soup.

Seeds & pods. Garbanzo beans (also called chickpeas or gram) are a type of legume from the family Fabaceae, subfamily Faboideae. They are popular in Middle Eastern, Mediterranean, and Indian cuisines. They are often used cooked whole in dishes, mashed (like in falafel or hummus), or added to soups and stews for extra texture and protein. Try them in Easy Chickpea Curry, Chana Masala, Moroccan Chickpea Soup, or Coronation Chickpea Sandwich.

Leaves. Also known as Arugula or Rocca, garden rocket is a peppery tasting leafy vegetable that is part of the Brassicaceae or mustard family. It is popular in salads and on pizza as it has a fresh peppery flavor. Try it in this rocca salad.

Bulbs. Garlic is a bulb vegetable from the allium (onion) family. Its strong flavor lends itself to being used as a spice to add flavor to dishes. Bulbs of garlic have approx 10-15 cloves, encased in a thin, papery casing.

Leaves. Although similar to chives (which have purple flowers and an onion-like taste), garlic chives have white flowers, flatter leaves and a mild garlic taste. Use them as a garnish to add flavor to many dishes, from casseroles and stews, to soups and salads.

Fruits. Gem Squash are small, dark green-skinned squashes about the size of a softball. They have a delicate sweet taste and can be served roasted or stuffed. Try them in Blue Cheese Baked Gem Squash.

Fruits. Gherkins are pickled cucumbers (also known as pickles or dill pickles). The name gherkin is common in the United Kingdom. Gherkins are made with young cucumbers, which are fruit that grows on a creeping vine. They're green, with an elongated shape, pale flesh and the watery insides have soft edible white seeds. Try them in Dill Pickle Pasta Salad.

Roots. Ginger is a root with a sweet/peppery flavor. It is used as. a spice and to add flavor to dishes. It is peeled and can be grated or sliced. The more surface area, the stronger it will be - so sliced is less potent in a dish than grated or minced. The easiest way to peel the knobbly root is to scrape the peel off with a teaspoon. Try it in this lime ginger dressing for salad.

Leaves. Gongura (also known as Red Sorrel, Ambada, Pitwaa, or Pulicha Keerai) are medium-sized broad, flat, green leaves with a sour, tart taste. Popular in India, they are often served pickled, steamed, or ground into a paste to make chutney. It is one of the main ingredients in authentic Andhra cuisine.

Leaves. Grape leaves are the large, flat leaves of the grapevine plant. They're used in many cuisines, such as the Mediterranean and the Middle East. They are often an edible wrap, rolled around various fillings. Try them in dolmas (stuffed grape leaves).

Leaves. Often found in Chinese markets, these leafy greens have pretty purple streaks in them. Young amaranth leaves can be eaten raw in salads, or chop and add to stir-fries or soups. Try sauteeing with onion, garlic and a dash of cumin as a tasty side dish.

Stems. These Green Onions (also known as scallions or spring onions) are the young harvested stems from regular onions that have not yet developed a large bulb. They have a milder flavor and can be enjoyed raw or cooked. Try them in mashed potatoes for the classic Northern Irish side dish, Champ.

Seeds & pods, leaves. Guar (also known as cluster beans) is a legume and is also the source of guar gum (a thickening agent made from dried beans that are powdered). The long, thin green beans look similar to green beans, but are more bitter, though they mellow once cooked. Guar leaves can be eaten like spinach. Try them in this Indian cluster beans side dish.

That's it! I hope you've found this list of 14 'Vegetables starting with G' useful. If any are missing, let us know in the comments and we'll add them.