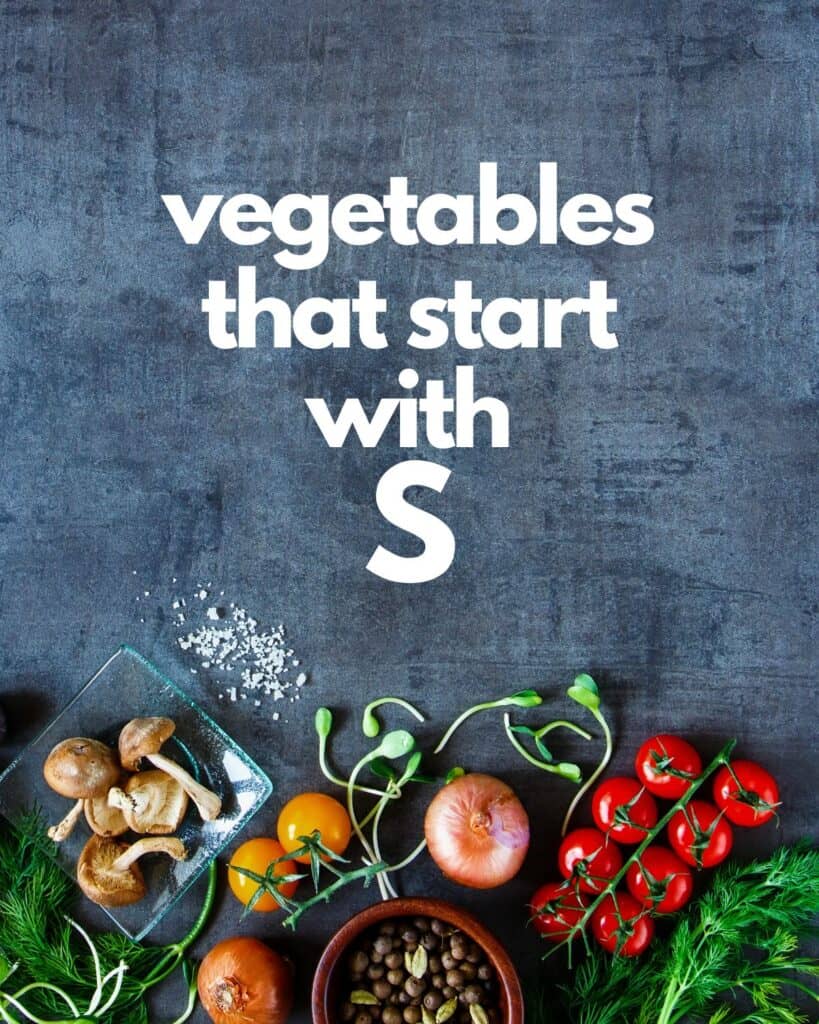 If you're wondering which are the vegetables that start with S, we've got them all here, from Salsify to Swiss Chard. Here are not only the 26 veggies beginning with the letter S in this list, but we'll also give you info, classifications, recipes, pictures, and more.

Our selection of veggies beginning with the letter S has all the ones we know. If you know of any more, let us know in the comments!

A few notes before we launch into the list of vegetables that start with the letter R.

NOTE: This vegetables that start with the letter R list was made with culinary vegetables listed.

Here is the list of 26 veggies starting with the letter S!

Roots. Salsify (pronounced salsifee) is a thin root vegetable, with a dark brown skin and pale flesh, that tastes delicately of artichoke. It's popular in Italy, France and Germany and the versatile vegetable can be boiled, baked, steamed and roasted. Enjoy it as a roasted vegetable side dish, in a stew or pureed. Try Kale Salsify Galette with Horseradish Sauce.

Stems. Marsh Samphire is an edible succulent that grows on the coast, or in coastal marshes. It's also called salicornia, sea asparagus, glasswort, or sea bean. Samphire has thin, firm green stems and a salty flavor.

Although edible raw, it's pretty salty, so samphire is best lightly steamed or boiled. Then add butter and a sprinkling of parmesan cheese for a quick side dish. Try these easy samphire recipes.

Fruits. San Maranzo Tomatoes are a variety of plum tomato, with a longer shape and strong flavor. They have a thicker skin and fewer seeds than most tomatoes, which, combined with their intense flavor and sweetness, is why they are commonly sold canned. Use in canned tomato recipes.

Leaves. Savoy Cabbages are leafy green brassicas with a distinctive large shape with wrinkly leaves and a mild taste. Savoy cabbage can be boiled, steamed, sauteed, and added to soups, stir-fries, and stews. Try cutting it into slices and pan-frying with a little butter, garlic, and chili flakes for a quick side dish. Check out these savoy cabbage recipes.

Roots. Scorzonera is a plant in the aster family. It is native to Europe and Asia, and has naturalized in North America. The plant is also known as black salsify, or black oyster plant. The root of the plant is edible, and has a taste similar to that of a black radish.

Leaves. Sea beet is a leafy sea vegetable that is closely related to spinach and Swiss chard. It is a good source of vitamins A and C, as well as iron and calcium.

Sea beet can be eaten raw in salads or cooked like spinach. It has a slightly salty flavor that is reminiscent of the sea.

Leaves. Sea kale is a type of edible seaweed that can be found in coastal areas around the world. It is harvested and eaten as a vegetable or used as a flavoring agent in various dishes.

Sea kale is a good source of vitamins and minerals, including iodine, iron, and calcium. It also contains a unique type of fiber that helps to promote gut health.

Leaves. Seaweed is a large variety of sea vegetables, with a salty taste. From nori and kelp to kombu and dulce, there are many types of seaweed with various shapes, sizes, colours and tastes.

Fruits. Serrano Peppers are hot, Mexican chilli peppers, similar to jalapenos, but smaller and 10 times hotter. As with many peppers, they come in a range of colours from the young green, to more mature red.

Use Serrano Peppers raw in salsa, salads and to add heat to dishes, or cook them into chilis and other dishes. Serrano pepper recipes.

Stems. Scallions (also known as green onions or spring onions) are the young harvested stems from regular onions that have not yet developed a large bulb. They have a milder flavor and can be enjoyed raw or cooked. Try them in mashed potatoes for the classic Northern Irish side dish, Champ.

Bulbs. Shallots are a small elongated variety of onions, with a mild taste and thin layers. They can be eaten raw, cooked, fried, or pickled. Try crispy shallots on a salad.

Fungi. Shiitake are edible mushrooms that are very popular, both fresh and dried, in East Asian cuisine. Shiitake mushrooms have 10-20cm caps, with dark gills underneath, and thin stems. They have a chewy and spongy texture. They're used in vegetarian dashi (Japanese stock/broth) as well as simmered in soups and used in other cooked dishes in place of regular mushrooms, such as risotto. Try these shiitake recipes.

Leaves. Silverbeet is also known as swiss chard or chard. It is a leafy green vegetable that grows from an inedible root. Young silverbeet leaves and stems can be eaten raw in salads, while larger silverbeet can be used in stir-fries, soups, stews, casseroles, or sauteéd as a side dish. Cook it like spinach, kale, or collard greens. Try it in these silverbeet recipes.

Seeds & Pods. Snow Peas are also known as mangetout or Chinese peas (because they're often used in Chinese recipes). They are flat, green peas in thin edible pods. Try them raw with other veggies as a snack, or cooked in Sesame Snow Peas or Cashew Snow Pea Stir Fry.

Leaves. Sorrel is a leafy green vegetable with a subtle, sour lemon flavor. It can be used in soups, salads, stir-fries or cooked dishes, or raw as garnish or herb. You'll find sorrel in Farmer's markets and occasionally at the grocery store. Try it in French Sorrel Soup or Sorrel Quiche.

Fruits. Spaghetti squash (aka vegetable spaghetti) has an oblong shape and ranges from pale ivory to orange. Spaghetti squash has solid flesh when raw, but when cooked (baked, boiled, roasted, or steamed), the flesh turns into thin strands that can be removed from the squash and eaten as an alternative to spaghetti. How to cook spaghetti squash.

Leaves. Spinach (Spinacia oleracea) is a dark, leafy green vegetable in the amaranth family that is related to quinoa and beets. Spinach can be eaten raw, where it has a milder flavor, or cooked, where the flavor becomes stronger as it concentrates. It's full of vitamins and other nutrients and is considered to be a superfood. Try these spinach recipes: Spinach Cake, Spanakorizo (Greek spinach rice), Spinach Salad, or Spinach Burgers.

Leaves. Spring Greens are the early leaves of cabbage plants, that appear in spring. The leafy green vegetables are harvested young, when they are tender and mild. Use them like kale and try them raw in salads, or cooked into soups, stews, stir-frys, and other dishes.

Stir fry spring greens in oil with a little garlic for a quick side dish. Or try them in Spring Greens with Garlic and Pine Nuts.

Fruits, grains and vegetables. Sweetcorn is another name for regular corn. You may be wondering, is sweetcorn a vegetable? Well, there isn't a straight answer. The ears are classified as a fruit since it grows from the seed/ovary of a corn plant. But it's also a grain because each kernel is a caryopsis (a dry one-seeded fruit in which the ovary wall is united with the seed coat). So, botanically, corn is both a fruit and a grain However, corn is also a culinary vegetable in the sense that it's served up for dinner. Try it in Creamed Corn, Coconut Corn Cake or Corn Chowder.

They have a mild flavor and soft texture. Sweetheart cabbage can be eaten raw or cooked. They can be cut into wedges and grilled. They can also be eaten in salads or boiled, steamed, sauteed, or added to soups. Try it in Cabbage Soup or Charred Sweetheart Cabbage with Hazelnut Romesco.

Roots. Sweet Potatoes (Ipomoea batatas) are from the morning glory family, Convolvulaceae, and are a distant relative to the common potato. Although some parts of North America refer to orange sweet potatoes as yams, they are different from actual yams.

They have a reddish-brown skin and bright orange flesh, that gets soft and smooth when cooked. They can be roasted, boiled, baked, steamed, and mashed. Try these recipes: Sweet Potato Cookies, Carrot Sweet Potato Soup, and Sweet Potato Gnocchi.

Leaves. Swiss Chard is a leafy green vegetable that grows from an inedible root and has long brightly coloured stems. Try it cooked like spinach in stir-fries, soups, stews, casseroles, or sauteéd as a side dish. Sauteed Swiss Chard.

Seeds & Pods. Snap Peas also known as sugar snap peas, are an edible pod pea variety with a thick pod wall and round edible seeds inside.

Snap Peas are often eaten raw or in salads, as well as being steamed or stir-fried. When eaten young, they can be eaten whole, with the pods, but more mature snap peas may need the fibrous string down the edge removed before eating raw.

Try them sliced lengthways as a pretty addition to a salad, like in this Broccoli Salad. Or cook them in Spicy Stir-Fried Snap Peas.

Roots. Swede, also called neeps or rutabaga, are a bulbous root vegetable with purple/green skin, and yellow flesh, with a sweet, earthy flavor. Swede can be peeled and boiled, roasted, or steamed.

Try them in soup, stew, casseroles or mashed as an alternative to potatoes. Try it in Mashed Swede, Roasted Swede, or Swede and Carrot Mash.

That's it! I hope you've found this list of 21 'Vegetables starting with R' useful. If any are missing, let us know in the comments and we'll add them.